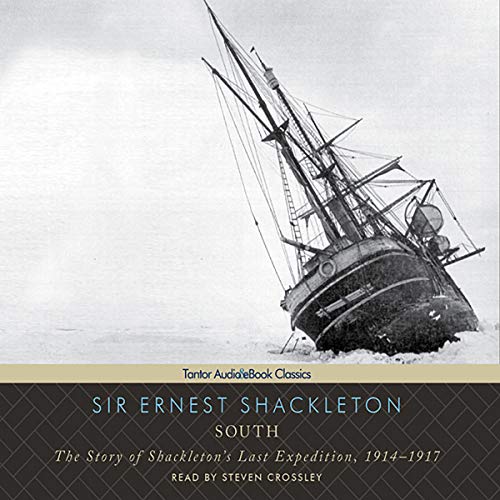 As war clouds darkened over Europe in 1914, a party led by Sir Ernest Shackleton set out to make the first crossing of the entire Antarctic continent via the Pole. But their initial optimism was short-lived as ice floes closed around their ship, gradually crushing it and marooning twenty-eight men on the polar ice. Alone in the world's most unforgiving environment, Shackleton and his team began a brutal quest for survival. And as the story of their journey across treacherous seas and a wilderness of glaciers and snow fields unfolds, the scale of their courage and heroism becomes movingly clear.

This is a must read.

If there were 10 books that one must read during their lifetime this is one. Leadership, courage and a level head with extraordinary leadership. Anyone who leads whether in business or a family can learn from Shackleton's way.

A bit of a drag

The narrator was excellent for this book but the story itself just wasn't good. I'd read Endurance by Lansing and that is much better. South is just hours and hours of reciting diary entries of latitude and longitude, temperature, and weather conditions. The second half is even worse. It's just a bunch of small arctic parties moving supplies from one depot to another depot and then to another. There doesn't seem to be much gained in the reading of this. If you want to know more about the actual voyage and voyagers, read "Endurance." If you want to know all the super boring scientific daily recordings for the entire three years of the trip, read this book.

A REMARKABLE STORY OF COURAGE AND INNOVATION!

Man's eternal drive to explore and understand the nature of his planetary space ship has never been more eloquently told. Shackleton's genius extends beyond the scientific. Nowhere do you find demonstrated the art of leadership than in the life story of Sir Earnest. A inspiring and rewarding read. LaMar M. Fox, M.D.

So as someone who currently serves in the military and travels frequently, I've had this book on my radar for quite awhile. It's a great tale about stoicism, leadership, and staying upbeat when all the odds are against you. But the narrator doesn't vary his voice much if at all, so on longer drives it can get a little monotonous. Also, this might just be me, but there were times parts of the story were retold from a different perspective, and the book (I felt) didn't transition very well between POV's. So that was a little confusing. But overall it's a great story, and frankly should be covered more in history.

Great narrator for a gripping story

I've read several other accounts of this expedition, but hadn't previously gone straight to the source. Shackleton's writing is a bit drier and more occupied with meteorological detail than later descriptions of the journey, like Alfred Lansing's 1959 Endurance, but any reader who is used to nonfiction from the late 19th and early 20th centuries will easily adjust to the tone and get into the book. And, of course, it gets much more dramatic about 3 hours in, when the Endurance is crushed in the ice and sinks.

Crossley's narration is fantastic, he really brings Shackleton's words to life. It feels like having SIr Ernest in the room with you, telling you his story.

Not very captivating for me as a listener

I tried listening to this story but it was so slow. I know this story and was expecting something a lot more interesting to listen too. I am not sure if the detail was so much that I felt like the author was trying too hard to paint a picture for the reader. I found my mind wandering and just could not get past a few pages. I suggest listening to the example first to know if you want to burn a credit on this.

Great book! Lots of details! Write it down! Map!

Great starter on the subject. Get excited ! There are lots on the way to get close the spirit of our great example of leadership.

I first read this account in a 1971 hard back edition. I have read it several times since and now I listen to it. It really is one of the most thrilling and magnificent stories of determination, courage and stress management I have ever had the joy to share. A two year mission cut short before it even starts by bad luck, the elements turning on you with a savage vengeance, no food or resources, a map two compasses and a sextant. No sun for months and a 2000 mile walk into the 40 below zero wind pulling several half ton boats across the ice.

Frost bit, hunger, exhaustion and above all courage. From simple ordinary men thousands of miles from home. No radio, no air support, no one even knows you’re in such distress yet. You will be dead before they even know you’re missing. But Shackleton kept this team alive. Feats of navigation that cannot even be simulated now. Seamanship that defies all understanding, but above all a will to survive and a determination to lead.

Perhaps we are now too cynical and sophisticated for such a story? And then I remind myself again, this is not fiction its fact. This is courage and adventure and leadership at its best. Written in real time from the diary kept diligently by the great man himself. Dump everything he said before the march across the ice. Where we are going even gold is worthless. But keep your diaries, if dying is the last thing we do, I want the world to find it didn't happen without a fight.

Get it, listen to it. It really will change your character for the better.

Marvellous. Ernest Shackleton’s own log from his failed attempt to traverse Antarctica. It’s practically all maritime. We learn about the many different kinds of ice & its weird effects, the ship and boats, the sea, the uncanny penguins, the dogs, and each member of the crew and the unbelievable ways they cheated death. The killer whales and the beach of Elephant Island are the stuff of nightmares. . Non fiction easily outshining fiction.

Utterly brilliant. Like the Endurance, I was gripped from the start. Awe-inspiring and inspiring. Sublime, in the only sense of the word.

loved it. the narration was fantastic, extremely evocative of the time and spirit of the men involved in this sounding story.

Fascinating look into the past

I was amazed by the the way these courageous men went about life in the Antarctic, this is a story of bravery and comradeship and loss of colleagues, these men went through hell and back, never giving up even though the elements tried everything to destroy them, I learned that of the 56 men that went to the Antarctic all of them except the lost had served during the war with distinguished endeavour, I thoroughly enjoyed the tale and was sorry to finish it.

Astounding tale of the journey of these men.

I listened to this with very little foreknowledge of the outcome. So the tale kept me on the edge of my seat as to what would happen.
The account is a fascinating view of different times, attitudes, technologies, knowledge of the world, and above all the unforgiving conditions at the Antarctic.
This is in the form of a diary, but very well written, that reads just like a novel. The narrator is perfectly suited and could be Shackleton himself.
What sticks with me is the incredible conditions endured (without giving too much away) so if you are into explorers, overcoming adversity, survival, seafaring tales, and old fashioned british empire stories then this could well be for you.
I loved it and was gripped throughout.
It certainly makes you realise what easy lives we have in comparison!

the story is what I expected though it took me a long time to get into it and I found it quite easy two doze off to the reader. weather reader is very in Keeping with time period of the book.

Fascinating, inspiring but a bit long.

A classic story of survival.. but quite drawn out, very technical towards the end.

I'd recommend reading until the end of Shackleton's diary, at that point only keep going if you're really desperate for more.

The narrator is pathetic,and,sounds like he is on a Saturday afternoon yacht sail. Flipsy,chatty,and,utterly hopeless for this kind of historical book. I find it difficult to believe that this narrator considers himself a true indication of someone of Sir Ernest Shackleton's calibre. Truly pathetic narration,and, a waste of money.