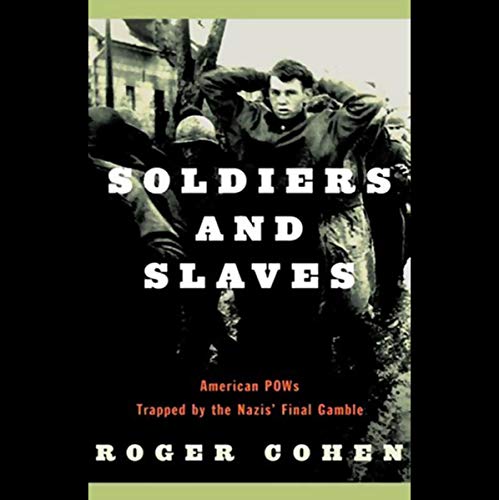 In February 1945, 350 American POWs captured earlier at the Battle of the Bulge or elsewhere in Europe were singled out by the Nazis because they were Jews or were thought to resemble Jews. They were transported in cattle cars to Berga, a concentration camp in eastern Germany, and put to work as slave laborers, mining tunnels for a planned underground synthetic-fuel factory. This was the only incident of its kind during World War II.

Starved and brutalized, the GIs were denied their rights as prisoners of war, their ordeal culminating in a death march that was halted by liberation near the Czech border. Twenty percent of these soldiers, more than 70 of them, perished. After the war, Berga was virtually forgotten, and the experiences of these Americans were buried.

Now, for the first time, their story is told in all its blistering detail. This is the story of hell in a small place over a period of nine weeks, at a time when Hitler's Reich was crumbling but its killing machine still churned. It is a tale of madness and heroism, and of the failure to deliver justice for what the Nazis did to these Americans.

Roger Cohen uncovers exactly why the U.S. government did not aggressively prosecute the commandants of Berga, why there was no particular recognition for the POWs and their harsh treatment in the postwar years, and why it took decades for them to receive proper compensation.

Soldiers and Slaves is an intimate, intensely dramatic story of war and of a largely forgotten chapter of the Holocaust.

This book should listened to/read by every human being. It will open your eyes to the suffering that humans have had to endure at the hands of others. Mr. Cohen has undoubtably spent many hours in the research. It is an excellent account of the horrors of war, and the brutality that some people of capable of. I often read books about Holocaust because I feel it is an atrocity that should never be forgotten. Thank you Mr. Cohen for making this information available.

A very moving account of POW's treated as slave laborers; contrast with The Great Escape (Unabridged) for an idea of how differently POW's were treated by the Germans.

I found Soldiers and Slaves a commendable account of a brutal period. Cohen obviously did his homework and does eloquent justice to a difficult subject filled with horrific crimes. The Nazi prisoners whether American or Hungarian Jew are heroically portrayed but the outcome is all too often miserably sad. Skipping between Nazi camp's and back and forth within the last months of WWII made following the story a little difficult.

Relatively well written with respect to detailing the difficulties with Jewish and American life in the concentration camps; however, a very difficult book to follow.

A different book on the Holocaust

It is interesting to see the collision of two groups of Jews who had remained largely untouched by the War until quite late, the American Jewish Soldiers and the Hungarian Jews. The Hungarians had managed to protect their Jewish population from deportation almost until the whole country was about to be overrun by the advancing Soviet forces. This is also a story which must bring up the question of fanaticism, when do you finally let you and accept that you have lost, that you were wrong? This is a sad tale with much death and brutality, yet this is as much about survival. Overall, well done and worth reading.

interesting read, I learned a lot.

one of the best books on the frenzies toward the end of the war. with narrations on what happened to, and a comparison between, European Jews and American GIs going through the same ordeal. very well written and good story.

Interesting but not stellar

It's OK but did not leave me wanting to listen to it again anytime soon...

very good, liked it very much & could put the book down.

I DIDN'T BUY IT

I took a listen, and I'm sorry, but this is the second book narrated by Michael Prichard that I've been turned off by his narration. Too dry to narrate books that should have some emotion.