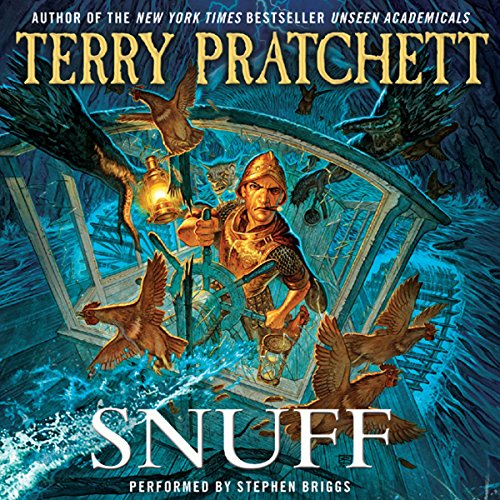 For nearly three decades, Terry Pratchett has enthralled millions of fans worldwide with his irreverent, wonderfully funny satires set in the fabulously imaginative Discworld, a universe remarkably similar to our own. From sports to religion, politics to education, science to capitalism, and everything in between, Pratchett has skewered sacred cows with both laughter and wisdom, and exposed our warts, foibles, and eccentricities in a unique, entertaining, and ultimately serious way.

At long last, Lady Sybil has lured her husband, Sam Vimes, on a well-deserved holiday away from the crime and grime of Ankh-Morpork. But for the commander of the City Watch, a vacation in the country is anything but relaxing. The balls, the teas, the muck - not to mention all that fresh air and birdsong - are more than a bit taxing on a cynical city-born and -bred copper.

Yet a policeman will find a crime anywhere if he decides to look hard enough, and it’s not long before a body is discovered, and Sam - out of his jurisdiction, out of his element, and out of bacon sandwiches (thanks to his well-meaning wife) - must rely on his instincts, guile, and street smarts to see justice done. As he sets off on the chase, though, he must remember to watch where he steps... This is the countryside, after all, and the streets most definitely are not paved with gold.

Hailed as the “purely funniest English writer since Wodehouse” (Washington Post Book World), with a “satirist’s instinct for the absurd and a cartoonist’s eye for the telling detail” (Daily Telegraph, London), Terry Pratchett offers a novel of crime, class, prejudice, and punishment that shows this master at his dazzling best.

If you are already a fan of the Disc World books don’t waste time reading the reviews just buy this book and start enjoying. If don’t you don’t know the series, this is a very good book and stands pretty well alone, but I might recommend you start with ‘Guards Guards’ then listen to the ‘Fifth Elephant’ and what I believe is Pratchett’s best book so far ‘Thud’ before moving on to ‘Snuff’. This story picks up just about four years after ‘Thud’ when the splendid Vimes is forced to take a vacation in the country. Vimes being Vimes he unearths all kinds of evil plots, but I won’t spoil your enjoyment by going into them here.
The pace of the story is leisurely and packed with marvelous detail and observation, the parallel with the Blandings novels of Wodehouse is well deserved. There are a couple of oddities which fans might scratch their heads at. For example in ‘Unseen Academicals’ we are first introduced to the Goblins and in that book they were a scarce almost extinct people, in this they are as common as roaches. In ‘Thud’ the Summoning Dark possess and then leaves Vimes, in this book it’s back in Vimes giving him special powers and giving evidence with a Welsh accent. Having said that the hard core fans will more likely be amused and intrigued by the games Pratchett plays rather than annoyed. He revives and extends characters he merely sketched in other books, bringing together a cast which spans maybe six or seven of the Disc books. All in all it’s splendid entertaining, satisfying writing, beautifully read and I am enormously pleased to see that the health problems Pratchett is suffering are not impacting his genius.

First of all, there are a few narrator/author matches forged in listening paradise, and this is one of them. Together they transport the listener in every sense of the word.

To my mind, Pratchett's true genius lies in his ability to communicate real wisdom about life and society in a lighthearted, whimsical and often hilarious yarn which includes an array of fantastical situations and personages. He often (perhaps even always) deals with gender issues, but if you want his concentrated thinking on the topic, read the absolutely delightful Monstrous Regiment. If you are thinking a lot about the structure of our financial system, you should pick up Going Postal or Making Money. And in Snuff, Pratchett does racial marginalization to a fare-thee-well using the too-often-reviled goblin. As always you will smile out loud all the way through and from time to time be convulsed with surprised laughter.

Finally, Pratchett writes wonderfully conceived and realized plots. They fit together like a perfectly designed itinerary with never a gap or skip and plenty of unexpected but entirely sensible twists and turns. This is not a writer who ever succumbs to the predictable. You can just relax and enjoy the trip, knowing that both the journey and the destination will be worth the fare.

Snuff is packed with action, interesting players, witty lines, thought provoking situations, and enough comedy to lighten the dark moments. This latest Sam Vimes installment is well worth the time and credit. In fact the quality of these books seems to just get better as they go (which is unusual to say the least) . However, it is not necessary to have read the previous ones to enjoy this as a fully stand alone novel. The author always gives a satisfying ending to each one in the series. All the suspense and the cliffhangers are contained and completely brought to fruition within each book. I wish some of my other favorite authors could manage this feat! The character development is also incredible- if you listen to this one first, you might want to then go to the first, much simpler story, "Guards Guards" and work your way through to "Thud", a relisten of "Snuff" and a more fuller appreciation of the growing complexity (and charisma) of one of my favorite Discworld Characters. [for listeners who would like a content rating; some bits of situational violence but nothing inappropriate for 10+]

Every visit to Discworld is a joy

39 books set in Discworld?! Quite a long trip from the original one that read so many years ago, about the carnivorous Luggage and the hapless Rincewald. But lord do I love this series.

Commander Vimes is a man in need of a vacation. Or at least, that is what everyone, in particular his wife, has decided for him. So via a strong conspiracy that goes all the way up to leader of Ankh-Morpork he is heading off for a vacation to the countryside estate of his wife. Accompanied by his wife, his child and his body servant he is forced out to an extended time of leisure. However, Sam is never off the clock. And then a Goblin is murdered in his area. Then, as things tend to do in Discworld, things get even more complicated.

I know the Discworld books aren't for everyone (there is just a bit too much tongue in cheek for "serious" fantasy fans) there is just something immensely enjoyable to escape to this fantastically weird and large world.

Another excellent story from Terry Pratchett

More of the same: Awesome!

Would you consider the audio edition of Snuff to be better than the print version?

I love audiobooks and when they're performed by an amazing narrator such as Stephen Briggs, print simply cannot compare.

I love Vimes, but I think his butler Willikins is just a hilarious character. He's a murder with a strict code of right and wrong and when both he and Vimes are in the scene together it just doesn't get any better than that.

Have you listened to any of Stephen Briggs’s other performances before? How does this one compare?

I've listened to all the Discworld books and he's as amazing in this as he has been in all of the one's he's read. I was disapointed when he took over from Nigel Planer, but after listening through them again, I have to say that I'm a Briggs-man. I can't say anything about his performance outside of the Discworld novels, however.

If you could rename Snuff, what would you call it?

I wouldn't rename it. It's the perfect impetus.

Not his best, but that's still better than most

When did Vimes become all-knowing? In many ways, this is classic Pratchett: taking on a serious social issue in an amusing, intelligent and amusing amusing amusing way. However, Vimes has somehow become an uber-cop. Just as Vetinari always knows what's going on and who's doing what, somehow Vimes has become so as well, but really, does the Disc need more than one omniscient being? I liked Vimes originally, because of his humanity, because he was a flawed man trying to do right. In this book, I found him a little cardboard. That being said, it's still Pratchett, so still a great book. And it's not like anything I say would deter a Pratchett fan, anyway. ;)

I love Terry Pratchett so I am biased. Sam Vimes is one of my favorites. Although, I can find no fault with any Vimes series except that I also love Carrot and wish he had a larger part. If you are thinking about this one then you have read other Discworld and Vimes novels so you know what to expect. This does not disappoint. I enjoyed I shall Wear Midnight and Unseen Academicals but this one was even better. Although he has Alzheimers, his wittiness and ablitiy to engage the reader are not deminished. Steven Briggs is awesome as always. Really, I have nothing bad to say about it. If you have not read or listened to all of the Vimes books please do before downloading this book. They are all on Audible. And Pratchett is now on Twttier and Facebook and is hinting at a new Moist Von Lipwig book. Well worth money or a credit just get it! :)

Once again, a fantastic story and performance

Stephen Briggs and Terry Pratchett seem to do no wrong. Every performance whisks you back into the diskworld, and this book is no different. Vimes is my favourite character amongst Pratchett's array, so this book had me a little more excited (and expectant) than his other plotlines.
Fear not. It's a fantastic story. I sincerely hope this isn't the last time I read about the city watch. Get it *now*

Pratchett's sense of humor makes every line worth the read, but the story in this book builds from a pointless character sketch to a brilliant, satirical work about prejudice and cultural bias before you realize it is doing it. Well worth the read, both for the story and for Pratchett's inimitable writing. The reader is amusing, too.