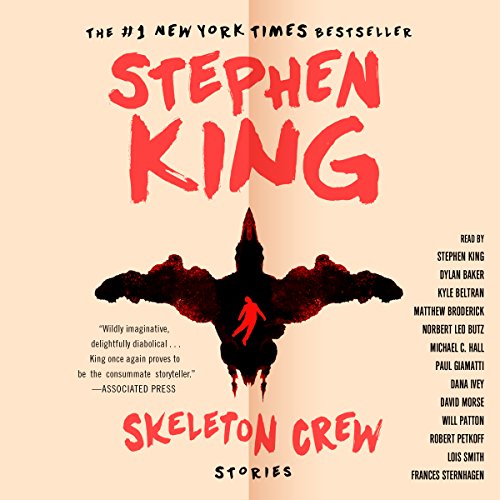 The master at his scarifying best! From heart-pounding terror to the eeriest of whimsy - tales from the outer limits of one of the greatest imaginations of our time!

In "The Mist", a supermarket becomes the last bastion of humanity as a peril beyond dimension invades the earth.

Touch "The Man Who Would Not Shake Hands", and say your prayers.

There are some things in attics that are better left alone - things like "The Monkey".

The most sublime woman driver on earth offers a man "Mrs. Todd's Shortcut" to paradise.

A boy's sanity is pushed to the edge when he's left alone with the odious corpse of "Gramma".

If you were stunned by Gremlins, the Fornits of "The Ballad of the Flexible Bullet" will knock your socks off.

Trucks that punish and beautiful teen demons who seduce a young man to massacre; curses whose malevolence grows through the years; obscene presences and angels of grace - here, indeed, is a night-blooming bouquet of chills and thrills.

A Book Full of Bones to Unearth…

Skeleton Crew is a fantastic collection of short stories by Stephen King and holds many of his classics. I love a great collection of shorts because it gives the reader a great sampling of the writer’s strengths (not that Stephen King needs anyone’s approval at this point, lol). Skeleton Crew contains twenty-two stories and most of them are horror or supernatural related. There are a few that focus more on the monsters who walk among us (King is great at pointing out the real monsters in our world- humans), but mostly they give you a glimpse into the unknown and he is the master at fleshing these nightmares into a believable reality, mostly through his realistic character development. In case you are wondering what stories are in this collection, here is a complete list-
1. The Mist
2. Here There Be Tygers
3. The Monkey
4. Cain Rose Up
5. Mrs. Todd’s Shortcut
6. The Jaunt
7. The Wedding Gig
8. Paranoid: A Chant
9. The Raft
10. Word Processor of the Gods
11. The Man Who Would Not Shake Hands
12. Beachworld
13. The Reaper’s Image
14. Nona
15. For Owen
16. Survivor Type
17. Uncle Otto’s Truck
18. Morning Deliveries (Milkman No. 1)
19. Big Wheels: A Tale of the Laundry Game (Milkman No. 2)
20. Gramma
21. The Ballad of the Flexible Bullet
22. The Reach
Each story has its own special place for me, but here are a few that I love. The Mist because it has a great Lovecraft feel to it and leaves you wondering what happens long after the story ends. The Raft was extremely terrifying in that it has a way of putting the reader right on the raft itself and the tension is nearly unbearable. The Monkey has its moments and I’ve always loved the idea behind Mrs. Todd’s Shortcut. King broaches some sci-fi in The Jaunt and Beachworld, both with strong elements of horror. Survivor Type and Gramma are fantastic shorts, both creatively unique and entertaining (plus Gramma gives a shout out to Hastur, so there’s that!) There are also a ton of good narrators in this bunch, too, including King himself, Will Patton, Paul Giamatti and Matthew Broderick. The best narration, in my opinion, was Michael C. Hall (Dexter) reading The Ballad of the Flexible Bullet. His voice puts you right in the middle of the story. This collection is a must read/listen for any Stephen King fan and makes for a great introduction to his work for those who haven’t tried out King. The audio quality is top notch and all of the narrators did a fantastic job!

This is a well-narrated version of Stephen King's seminal short story anthology, but it's not truly unabridged. While it contains all the short stories, it lacks King's original Introduction to the volume, as well as his (always indispensable) Author's Note at the end. Combined, that's approximately 20 pages of material omitted from the audiobook. King's explanatory text is always fascinating, and for those who enjoy hearing the history of the story, this is a disappointment. Otherwise, it's very well done.

Not Bazaar, but still The King

GOOD LOOKS ARE CHEAP IN A WEALTHY COUNTRY
There are several very good stories in this collection. The Mist runs over five hours, but is very good. I especially liked Mrs. Todd's Shortcut, which was not scary. These stories are older than The Bazaar of Bad Dreams and the collection as a whole is not as good. If you are trying to decide between the two, get Bazaar. Of the 22 stories in this collection, there were seven that I loved and the rest fell between okay and boring. This is normal for any collection, but of course King has us spoiled. Several of these stories must have been written in the sixties or early seventies. King's habit of using lots of pop culture does not appear in these stories. The stories vary greatly also in style and content. One really good story is a Noir and than their is science fiction, paranormal, cannibal, coming of age, teenagers, grandmas, lovecraft, etc. It is a must for King fans, but you might want to fast forward a few of the stories.

I GROK YOU, THAT'S A PISS CUTTER
The narrators are top notch. King understand the importance of a good narrator and rarely lets anyone but the best read his stuff. I especially loved Will Patton and Paul Giamatti. They both read two stories and Patton does The Mist.

I LIKE A WOMAN WHO CAN LAUGH, WHEN YOU DON'T HAVE TO POINT HER AT THE JOKE.

MOST LISTENERS would prefer that anthologies with multiple narrators LIST WHO IS READING EACH STORY! How hard can that be, Audible?

These are excellent renditions of many early Stephen King favorites; well worth investing my monthly credit to hear them in new voices.

I know I'm not the only listener who will want to have this info.

A very inconsistent collection of stories. Some are pretty brilliant and brilliantly read. Others bored me to tears. Everything read by Paul Giamotti was fantastic!! “The Mist” was also a standout (I think it was narrated by Will Patton). Sadly, most everything read by a female left me cold and emotionless; the stories and how they were narrated seemed to go nowhere. “Grandma” was good, but utterly boring for its first half, and then picked up in its second half and ended with a really nice (and scary) ending. Overall, Skeleton Crew was worth the credit. The good definitely outweighed the not so good.

Chapter 1 is the mist

You have to listen to this audio version. They are read by some fine and favorite actors, and they all seemed new to me. This was a real treat!

Overall, this is pretty good, even though I already have these stories in other Audible releases. The Raft is one of my favorites so I didn't mind hearing this one again. I didn't give it five stars all across the board because of that, and also, there are so many stories and while I loved many of them, there were a few that didn't quite do it for it me the first time I listened through it. I've listened several times now (gets me through the day) and a couple of those iffy ones improved upon a second listen. I was really impressed with Beachworld. Michael C. Hall nailed that one. I wish he could have narrated the Dexter novels, but since the Showtime series was a little bit different, I guess it's appropriate someone else narrated those, but I digress. (And, BTW, the narration job on the Dexter novels was not bad - the author did a good job with that). The point is, Michael C. Hall is a super performer. Also, Norbert Leo Butz did a great job with Nona and Survivor Type. He was perfectly creepy in Nona, and Survivor Type is one of the most horrific situations I can imagine, and I'm glad that the story wasn't ruined with an inept narrator. The short story Gramma had notably cheesy music with it, which reminded me of an 80's B horror film. Cain Rose Up was one of the stories that I just didn't like - it was just sort of incomplete, blah, boring. The story about the tiger in the bathroom seemed stupid at first, but it did make me smile at one point. Overall, there are some stories/performances that are really good, and made up for the ones that didn't seem to be all that great at first.

I read Frank Mullers version of this a while back. As good as it was, I'd have to say this version is better. Each story has a different narrator that gives the story it's on unique voice. My personal favorites were survivor type read by Norbert Leo Butz, and The mist read by Will Patton. I also thoroughly enjoyed Frances Sternhagen's reading of Gramma. Thanks to Simon Schuster for making Skeleton Crew an Audio book and thanks to Audible for making this book available for download.

Wonderful collection of classic king stories. Everyone can find a favorite story with this one.