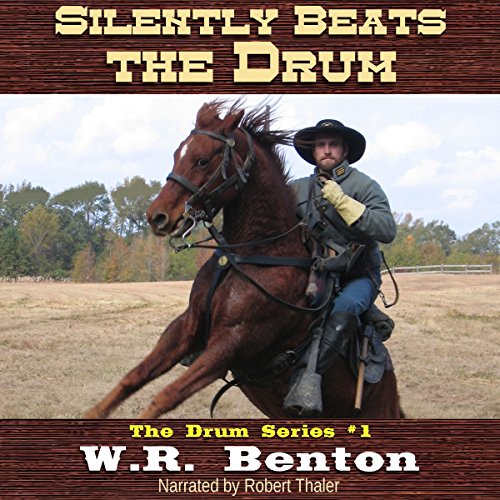 The Civil War has beaten down Jeb Patton beyond the point of mere exhaustion. Only the precious memories of the girl he left behind sustains him as he fights on. He should have died countless times as he fought for Southern Cause and Jeb knows his luck is running mighty low. Fate catches up to him one night near a no-name town somewhere in war-torn Arkansas. Instead of waking up in the arms of an angel, he wakes up in a medical tent - his right leg gone. With this blow Jeb loses the desire to live, until he meets a man even more severely injured than himself. Taking strength from this unfortunate fellow soldier's misery, the newly discharged Jeb makes plans to head home.

It's not an easy road, and Jeb is hampered by his injuries, the dangers of bushwackers and Union soldiers who are raiding the countryside. Ironically Jeb befriends an old slave - now a runaway heading north to freedom. Together they stand a better chance of surviving the chaos and they team up in their travels. Challenges and heartache await them on the dusty trail, but the pair set out for Montana with little more than their courage and dreams of a better tomorrow.

Another exciting historical adventure, and story of friendship and bravery from best-selling western author W.R. Benton.

Where does Silently Beats the Drum rank among all the audiobooks you’ve listened to so far?

one of the best I probably finished it in 2 days. worth it

What was one of the most memorable moments of Silently Beats the Drum?

The gun fights and Injun fights

when Buffalo Hump goes to talk with the Sioux medecine man

there was a woman who cried over her child. I felt that.

the book was action packed. The narrator was very talented but went too fast sometimes. Benton really likes writing odd characters and then blowing em away

Would you consider the audio edition of Silently Beats the Drum to be better than the print version?

Yes not much doubt about it. This is because the dude reading it is a very good actor or at least sounds like it so he brings the characters into full view for me. You know a lot of what I buy sounds like a guy reading a story. This one isn't like that It sounds more like one of those early radio shows or something hard to put my finger on it but it was different and better for it

there must have been 35 or 40 characters in this thing. I liked the bad guy the Indian warrior and the old black slave. there's plenty to go around

look there are 40 odd chapters in this and you get your money's worth each to his own, I guess I don't want to spoil it for anybody else

If you could rename Silently Beats the Drum, what would you call it?

nthin much silent about this story. Off the top of my head I'd call it the Last Man Standing

Benton is good but he tries and covers too much you got black slaves and Indians and white psycho and a one leg hero and a bunch of women and kids in there. Theres great fight scenes and good friends but all the words about cooking and food I don't know if that helps the story. Benton talks about the Civil war and slavery and the Indians but all that is too much sometimes just get on with the action and the story that's where he is really good and the whole thing takes care of itsef. Ordinarily I don't bother with comments but when I finished this thing in 3 days I wanted to give it a nod.

What made the experience of listening to Silently Beats the Drum the most enjoyable?

the Captain's gang was funny. They kept losing guys in fights, gettin dry gulched, until they were down to the bottom of the barel and the bad guy gets to face the Entire Sioux nation pretty much on his own, too bad for his ass

Thaler is obviously an actor and really good reader. there were so many different characters it sounded like one of those old radio shows with 15 or 20 actors in the background

I liked it. Benton does get long winded at times. He can throw that stuff out but he holds my attention and I listened to the whole thing in a pretty short span and than might be sayin a lot because i dont have patience for audio that is boring, not in my line

Diamond in the rough

If you could sum up Silently Beats the Drum in three words, what would they be?

Buffalo Hump was somebody I don't find often. So was the Indian named Bear. They were very honorable but they were very savage. They had a code.

No. Thaler knows what he's doing. Huge range of characters, women too, some of the characters were pretty one of a kind

If you could rename Silently Beats the Drum, what would you call it?

Tale of the Wild West

I read a review on this one but didn't expect much. I wonder if folks know what a good writer Benton is, he really uses his imagination and he kept me guessing but he does repeat himself and I hope he stops that because I will get the next audio in the series maybe

Sure. It listens like a movie. I got really involved.

What was one of the most memorable moments of Silently Beats the Drum?

I did like a lot of the women. The slave girl especially. The old black man riding with the Indians was a hoot

this guy was very good with that deep cowboy voice but I was angry that they did not give credit to the woman who read the female parts, she was very fine, why do they do that??

I did cry a bit over slavery. The author worked that angle pretty well. The Sioux Indians were funny sometimes and strange maybe you could say. There's a scene in there where there toking up in a tepee that's pretty hilarious. Thee bad guy was so bad he was funny.

I'm not done yet with this one, I'm in chapter 38 but I will definitely follow Benton and get some of his other stuff, this one was well worth it.

well a friend told me about it. Was a fine listen. Exciting. I like westerns and this thing had lots of action.

What other book might you compare Silently Beats the Drum to and why?

no, never heard of him. He's good though. A sure hand. Tons of characters.

If you could take any character from Silently Beats the Drum out to dinner, who would it be and why?

Jeb. He is the hero. Be like going out to dinner with Clint Eastwood or Tommy Lee Jones

this was a pretty fast listen because the action keeps it going and I liked all the characters and how different they were. I'll be listening to everything in this series I think. The writer knows what he's doing and really got my attention

What did you love best about Silently Beats the Drum?

I do love Mr Benton's writing. Tons of action in this one, great hero, great characters. Wow

hard to say on this I did really like old Moses, felt like he was my friend. Felt same way about Buffalo Hump the warrior. Completely different guy but brave,funny, deadly. Jeb is cool and the bad guys are bad ass.

Yu mean the narrator? Pretty incredible. He did so many different people with so many voices and they were real. Wow.I was amazed.

I laughed a lot bout all the different ways guys were getting killed. Some of the death stuff was funny in a good sort of way. The bad dude was actually kind of funny. that he was able to last but I won't say more, don't want to spoil it. I was surprised how sad I felt when the mother lost her child and the slave girl was sad too but funny at times. Mr Benton really wrote some fine people into this thing, its not a standard western. I think I came away knowing more about things like slavery.

I could do without all the food talk. its why I knocked the book down a star, the cooking sounded all the same and like I wanted to get back to the action. But this book is one of the best I have heard , real entertaining and much better than most all the other westerns I heard before.