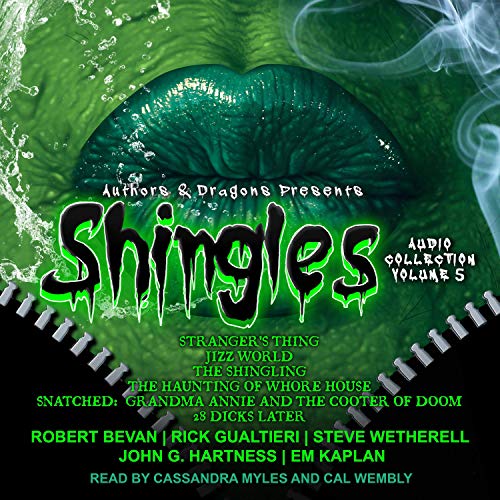 "Stranger's Thing" by Robert Bevan: Four friends get more than they bargained for when they break into a seemingly abandoned research lab.

"The Haunting of Whore House" by Robert Bevan: Lucy and her brother, Junkie, find out that moving was only the beginning of their troubles when they encounter the ghost of a little boy in the woods.

"Snatched: Grandma Annie and the Cooter of Doom" by John G. Hartness: Jefferson Smith decides to shadow a detective, a coroner, and an OB/GYN for Career Week, with unexpected results.

"28 Dicks Later" by EM Kaplan: When a mysterious illness spreads like wildfire through Boneville, it's do or die time for Willie. Will she rise to the occasion?

one of the best Shingles collections so far

every story has its moments where you both laugh out loud and cringe at the same time. Easily top 2 of the shingle anthologies. The sheer absurdity of the premises makes this book worth a read, id give it more than 5 stars if I could.

Four and a half out of six ain't bad

First off, the narrators did an amazing job with this entry!
Second, four off the stories in this volume are straight up awesome and really enjoyable.
Third, why did Bevan keep getting a third of all the stories? No matter which way that is looked at, it's a bad idea for one author to be so over-represented in a collaboration.
Fourth, one of the Bevan shorts, Stranger's Thing, was much more enjoyable than most of his catalog of Shingles

If someone told me these stories were written by males older than 15, I’d call them a liar! I can’t imagine the contents of this book would be found interesting to actual non-perverted adults.
If only I could be compensated for my time (2 stories was all I could tolerate) wasted listening to the escapades of adolescent, sex obsessed, freaks!