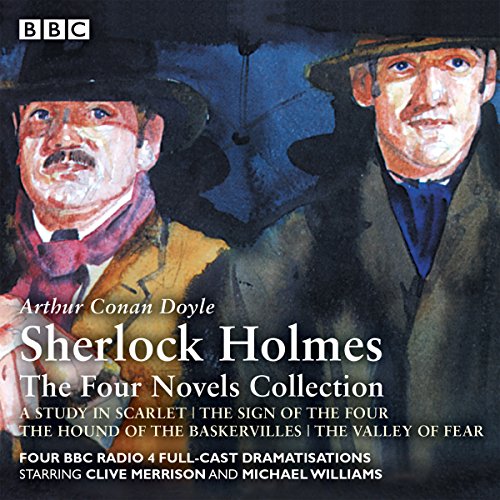 Clive Merrison stars as Holmes, with Michael Williams as Watson, in these four adventures from the unique, fully dramatised BBC canon of Conan Doyle stories: A Study In Scarlet, The Sign of the Four, The Hound of the Baskervilles and The Valley of Fear.

A Study in Scarlet introduces the most famous partnership in fiction, as Watson is drawn into Holmes' investigations following the discovery of a body in a blood-stained room in Brixton.

In The Sign of the Four, a beautiful young woman comes to Holmes with a mystery which is to stretch even his remarkable deductive skills.

The Hound of the Baskervilles finds Holmes and Watson travelling to Dartmoor to investigate the death of Sir Charles Baskerville and protect his heir. Are the Baskervilles being stalked by a satanic hellhound, or is the creature part of a sinister conspiracy?

In The Valley of Fear, a coded warning sends Holmes and Watson to the country house of the reclusive Jack Douglas. Arriving too late to prevent a tragic death, they must follow a series of bewildering clues to find a murderer who has vanished into thin air.

Holmes and Watson Come to Life

I grew up listening to these books. I remember my mother popping the cassette into the car stereo when I was young and play these stories along with all the Sherlock Holmes stories portrayed so masterfully by Clive Merrison and the late Michael Williams.

For start, you can certainly see an improvement in quality from "A Study in Scarlet" to "The Hound of the Baskervilles" and the "Valley of Fear." The voice acting, which has been lauded by critics, and the engrossing story have brought me back to listen to these again and again.

I highly recommend these for a long car ride or trip. They are entertaining, faithful to the original books, and thoroughly enjoyable.

I love these actors. They are perfect in these roles. The play is so tightly woven with the original novels.

Clive Merrison is the voice of Sherlock

This is just the start, check out the rest in this amazing series, the definitive Sherlock.

I grew up watching Basil Rathburn and the original stories are nearly as splendid. I drift into the world of Doyle as I clean, do yoga, and run errands. The stories help to brighten my day. No matter what the task; short of reading another book. An audio book takes away the drudgery.
A. Hoeft

Great performances by the cast and four great stories. I really got this for The Hound of the Baskervilles but enjoyed the other stories too.

My favourite Sherlock and Watson

I just love this pair of actors. John Watson is reliable, dependable and a solid foil to this Sherlock’s energy, ennui or mania. Delightful and wonderful adaptation too that really shows the depth of their friendship and the intricacies of the stories

These four novels were masterfully brought to the radio by Bert Couples with a superlative cast. The mercurial Holmes of Clive Merrison and his friendship with the long-suffering Watson - the warm tones of Michael Williams - give a depth and humour to the stories. Highly recommended.

I have greatly enjoyed all the other BBC radio adaptations by Bert Coules but this of the longer novels was very disappointing. I am not sure if it was the modern adaptations fault or the original books. Two of the stories were almost all told in flash backs in America, so it didnt even feel like a Holmes story, and the American accents, plus in one instance Irish American plus a Scottsh policeman, and a Welsh detective made the auddible seem more like an amateur dramatics where they were trying to cram in as many over the top accents as possible. Very very disappointing.