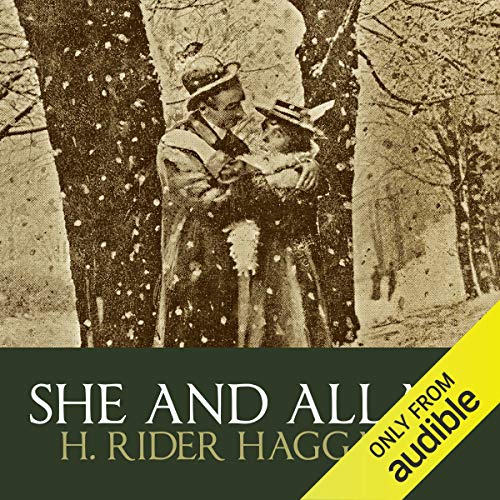 She and Allan is a novel by H. Rider Haggard, first published in 1921. It brought together his two most popular characters, Ayesha from She (to which it serves as a prequel), and Allan Quatermain from King Solomon's Mines. Its significance was recognized by its republication by the Newcastle Publishing Company as the sixth volume of the celebrated Newcastle Forgotten Fantasy Library series in September 1975.

Henry Rider Haggard, KBE (22 June 1856 – 14 May 1925) was an English writer of adventure novels set in exotic locations, predominantly Africa, and a founder of the Lost World literary genre. He was also involved in agricultural reform around the British Empire. His stories, situated at the lighter end of Victorian literature, continue to be popular and influential.

In She and Allan, H. Rider Haggard revives the characters "Ayesha" and "Allan Quatermain" from his highly successful novels She and King Solomon's Mines. British actor Barnaby Edwards brings decades of stage and screen experience to his performance. His deep and elegant timbre suggests the Shakespearean heroes that Edwards has so often played, though the actor is equally well known for his work on the series Doctor Who. Haggard's fantasy novels are always packed with adventure, but he outdoes himself in this 1921 work. The plot involves Zulu doctors, magical amulets, epic battles, and cannibals. The audiobook's premise is that the late Mr. Allan Quatermain left behind his first-person account of his travels, hence the lengthy introduction.

Best of the Trilogy

Read these as s child and feel in love. This was my least favorite but now realize it is so much more than a prequel. Haggard's most revealing novel; he lets us in on his world view. Th e narration is wonderful as well.

It's not my favorite of the Quartermain story

If you could sum up She And Allan in three words, what would they be?

What other book might you compare She And Allan to and why?

Not sure about this

He did great with both male/female and diversity of voices

I was a little annoyed how Haggard made Quartermain such a staunch disbeliever. He wasn't that bad in any of the other stories when it came to unbelievable things

I like it as the story of Quartermain and Umslopogaas' meeting