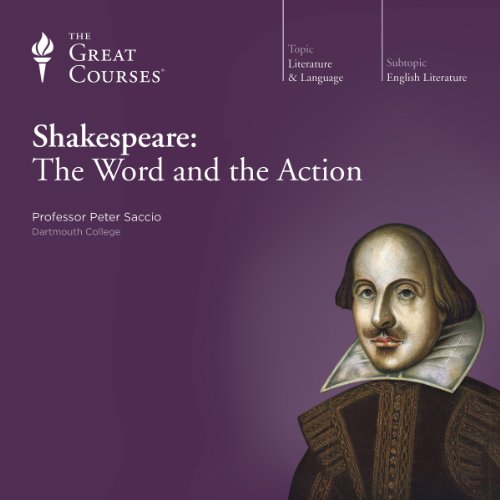 Shakespeare: The Word and the Action

Shakespeare is the leading playwright - and probably the leading writer - in Western civilization. His works are one of the greatest achievements of the human mind and spirit. And yet, for far too many of us, they remain a closed book. Why?

Professor Saccio is well suited in these 16 lectures to bring you back into Shakespeare's world and tune you into what he calls "Shakespeare's wavelength." As you hear him effortlessly deliver heretofore impenetrable language with the proper meter, emphasis, intonation, and emotion, you'll experience the pleasure that comes with true mastery. Professor Saccio also prepares you to read or watch the plays by orienting you to Shakespeare's use of multiple plots, lines of action, and the sometimes outmoded forms of human behavior (such as courtship in Elizabethan England) that arise in his plays.

Shakespeare was acutely aware of the importance of history - and not just of events but of ideas. You'll see how his tragedies and histories are meditations on the changing world around him and of the eternal issues of character and human nature. You'll journey into a world where actions and ideas intersect and raise profound and unexpected questions, such as how Richard III could be both a classic villain and a Renaissance figure, and whether a man such as Coriolanus can be a hero without a cause or a country.

To read Shakespeare is to take a daunting journey into a perpetually undiscovered country that reinvents itself with every visit. But with these lectures, it will become a familiar pleasure.

More Downs than Ups - Not for Beginners

If you are a beginner to Shakespeare I would suggest staying away from this specific course. To me it felt like this was meant for someone with extensive exposure to Shakespeare rather than one hoping to learn the basics of Shakespeare's styles. I have been studying Shakespeare's works for 20 years and have attended countless of his plays but I could only say this course was average. Here's the rundown:

Pluses:
• Descriptions of the different meters (such as iambic pentameter), forms of speech (prose and verse --- and when they are used) and the rhythms (choice of words) employed by Shakespeare in his plays and sonnets
• Insight behind the battle scenes of the Henry VI plays and their significance to the message behind the plays
• Character analysis of Richard III which includes discussion of his deformed body representing the sick state England had become during the War of the Roses, what made him stand out from other Shakespeare’s villains that made him his first great villain, and how (by thinking outside of standard Medieval beliefs) he perfectly embodied a villain for the Renaissance
• Fate and free will and its relationship to history explored in Henry IV Part 2
• The different types of action in Hamlet and analysis of his “To be or not to be” speech
• Description of the Romance genre and the human desire to preserve beauty and excellence in The Winter’s Tale

Minuses:
• I was hoping for more of an analysis on the action of a play’s plot beginning to end; Instead the professor would instead seem to…
o ….focus on uninteresting topics/aspects of a play or
o ….delve into advanced discussions that made it difficult to follow or
o ….have a hard time making his main points in many of the lectures; While some of the theories and assertions were interesting, the examples he gave did not seem to be relevant to his main points or he did not explain them enough to bring the points together
• It felt like more time should have been spent on explaining why Shakespeare chose certain words at a specific time or the definition of the common phrases/words that appear foreign to modern audiences
• The professor seemed to have an assumption that the listener has a prior understanding of non-Shakespeare topics from classic mythology to Greek philosophy to ancient world views to other literary works; Often in the lectures he goes off comparing or contrasting Shakespeare concepts to this other material

Overall I would say there are more downs than ups but perhaps it is just the professor's style not being on a wavelength I can understand. Others may find him very engaging. There are certainly some good lectures (outlined above).

I love the great courses, I own the great courses plus, but some of the earlier lectures are missing this is one of them, Peter Saccio does and amazing job. I have learned so much from this course. ALL SHAKESPEARE FANS WILL ENJOY, I promise


Professor Saccio articulates Shakespeare—in voice and meaning— better than any other commentary since the Romantics. I especially appreciated his analysis of Richard III and that play's connection to the Renaissance. Quite insightful.

This is the third course I've taken on Shakespeare from The Great Courses. This one had an interesting slant and I enjoyed it very much. I wish Prof. Saccio would do another on the more obscure plays!

I've listened to all of Peter Saccio's courses and they are all very good. I don't agree with every point of his analysis but that is fine -- I'd rather a professor who has something to say and can back it up (and with whom I agree much more often than not).

If like me, you listen to these things as you go to sleep, don't use this one for that. The actual acting out of emotional scenes isn't conducive to sleep. This is a enthusiastic retelling explanation of Shakespeare's genius, the professor is definitely passionate about his work. I like that he doesn't go into the authorship question and doesn't attribute what Shakespeare wrote as autobiographical. Writers are creative, and good ones write about characters that are different than them. The man was writing to audience and wanted to sell tickets and poems and like any good writer, he took himself out of the story. What I didn't like about this telling is the professor doesn't say what is history and what is created for dramas sake. Calling Cleopatra a tramp isn't really helpful in illuminating minds with truth, I'll give him murderer though..

This course focuses too much on the professor and his sexual interests, which he attempts to connect to Shakespeare's plays. There is a camp quality to the verbal style, including long shuddering intakes of breath meant to communicate sexual excitement. The ideas are sometimes unusual, such as Prof. Saccio's belief that Shakespeare's sonnets are not biographical, but are perhaps an extended experiment in sonnet-making. I don't believe that is a majority opinion. I held out till nearly the end of the first half of the lectures, when a lovely quoted passage was so enthusiastically sexualized in the discussion that I turned off the book and deleted it as indecent. The professor frequently promotes his two other lecture series on Shakespeare for The Great Courses, but I'll want to take care to avoid those.