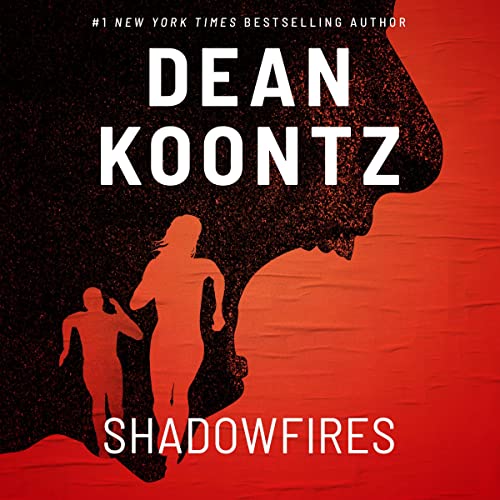 A haunting hair-raiser resurrected with a NEW recording and NEW narrator.

Rachel's request for a quick and clean divorce enraged her husband. She’d never seen Eric so angry, so consumed by pure and terrifying hatred. Then, in the heat of the moment, Eric was killed in a traffic accident. Shocked and relieved, Rachel had nothing left to fear. Until Eric's body disappeared from the morgue—and suddenly, Rachel is being stalked by someone who looks just like her dead husband.

I found myself speaking back to the audio with things like "seriously?" and "no kidding... (sarcastic face)" and guessing the next plot moment before it happened. It seems like a book written by a freshman college English major trying to be Dean Koontz or Stephen King, and with a Thesaurus at the ready. The writing is just not good.

I am a Dean Koontz fan and know what I am getting. But this one... jeesh.

And seriously? Rattle snakes? And what did the guy turn into exactly? A reptile? Was an original edit of the book chopped up so that things don't make full sense?

Gosh. Just did not like it. I listened to the entire book knowing full well I would be disappointed. Which I was. And had seen the ending coming.

I have tried for myself to determine if the reader was part of the problem. I'll say yes - but only in part. One can only do so much with the weak material. However, I think she did contribute. But I do no blame her.

In the end, I found it weak, predictable, and almost annoying. When one finds themselves talking back to the audio in annoyance, that's a sign.

I would liken this book to a summer movie. Don’t worry about the believability of the story. Just check your analytical mind at the door and enjoy the ride. I did.

I probably read this book back when it first came out and it is still a great story. I liked the early books using a lot of freeways and cities in California. Very good narration.

A Book too Far

This story stretches believability to it's end. The concept of scientific advancement vs. law is not strong enough. The characters don't know enough about ? throughout.

Dean Koontz is a master storyteller!

For years I’ve enjoyed all of Dean Koontz’s novels. The Odd Thomas series, Frankenstein series, the Jane Hawk series, By the Light of the Moon, Innocence, A Big Little Life, Velocity, everything. I’m a Hugh fan and will always enjoy the beauty of his prose and wit. Moral dilemmas abound.
Thank you.

Story could have been told in half the time. Way too wordy in describing things. Koontz at times in some of his books goes overboard with the adjectives and descriptive phrases. Shadowfires is over the top with this. Distracting and makes one lose interest.

Listened while gardening. Found myself just standing & staring imagining the fantastical descriptions! Loved this Koontz one!

This book was 17+ hrs. Could have easily been half that length. The overuse of diction made us feel like this was a “word of the day” calendar in a novel. It had way too many unbelievable situations and left us saying, “seriously”? About every 10 mins. Don’t bother. Too bad because we like Dean Koontz overall.

Dean Koontz engages all the best elements of storytelling in his latest novel, Shadowfires. A brilliant but brutal scientist fears the eternal damnation his parents promised would befall him because of the perversions visited upon him by his uncle as a child. He most sincerely wishes to avoid death at all costs. He develops a genetic “cure” for death, a promise of immortality, but the test mice, which came back to life after being killed, soon bashed their heads against their cages and had to be destroyed.

His beautiful, much younger wife has had it with his cruelty and hatred, and seeks to divorce him, refusing all but a token pittance of the incredible wealth he has already unearthed from his amazing discovery, for the “cure” promises to change the world as we know it. He is so infuriated by what he considers the insult she has dealt him by refusing his wealth, he threatens to kill her and stomps across the busy street outside the lawyer’s office, where he is struck by a truck, bashing his head in, killing him on the spot.

Then his body disappears from the morgue. The police, the government, the company investors, and a number of other agencies get involved in the search, which reveals again and again a cache of dead bodies and horrifically brutal damage, much of which seems aimed at the beautiful and good-hearted woman now his widow.

This novel is chock full of those who would be in power at the cost of their souls, those who would be legends of goodness and truth, and those who just want to make it home safe to be with the ones they love. All the elements converge to make one damn good story. I couldn’t stop reading it unless I absolutely had to!

A thoroughly satisfying read, this novel brings to “life” a monster whose journey blends Dr. Frankenstein with his monster, shapeshifting from the wondrous to the horrific to beyond imagination, and the total gamut of hopes, dreams, schemes, deepest longings, rages, lusts, and truest love.

And throughout rages hunger, Shadowfire and Changefire, heat that permeates existence with an intensity heretofore unknown.

I’m pretty sure this creature will become legendary in the most infamous sense. Don’t miss it.

Rather dated tale made frustrating to listen to as the narrator seems to be unable to pronounce a large number of words. She should have pre-read it first. Spoiled the experience

It’s probably a fine novel if your imagination can stretch to Zombies. Just couldn’t finish but you might want to.

What a crazy journey!
So many deep feelings, emotional turmoil, and I’m not even going to mention the turn this book takes ….
Would recommend to people who really want an escape from reality.

Not my kind of book

couldn't wait for this book to finish not because I was enjoying it but because I found it couldn't keep my attention: although I listened to it while doing house work, it did not grasp my attention. I did not enjoy listening to the narrator.

iam shore I read this book quite a long time ago .Man that Eric is a lizard lips if I ever sore one Lol Thank you so much Dean 💜 And Thank you Jane Oppenheimer for reading to me much appreciated 💜