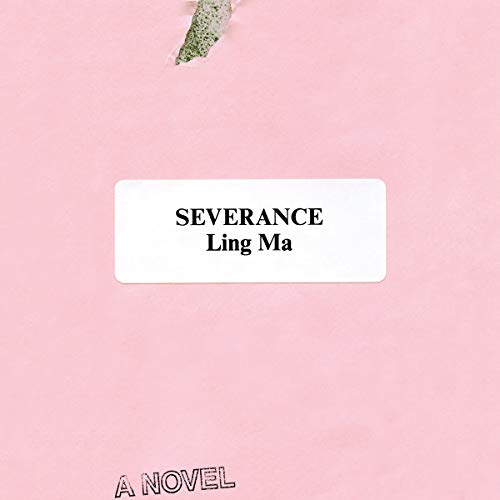 "Narrator Nancy Wu delivers an outstanding performance of this cheeky satirical novel...Listeners will be entertained by the world building; cast of amusing, eccentric characters; and bizarre charm of the aloof heroine." (AudioFile Magazine, Earphones Award Winner)

Maybe it’s the end of the world, but not for Candace Chen, a millennial, first-generation American and office drone meandering her way into adulthood in Ling Ma’s offbeat, wryly funny, apocalyptic satire, Severance.

Candace Chen, a millennial drone self-sequestered in a Manhattan office tower, is devoted to routine. With the recent passing of her Chinese immigrant parents, she’s had her fill of uncertainty. She’s content just to carry on: She goes to work, troubleshoots the teen-targeted Gemstone Bible, watches movies in a Greenpoint basement with her boyfriend.

So Candace barely notices when a plague of biblical proportions sweeps New York. Then Shen Fever spreads. Families flee. Companies cease operations. The subways screech to a halt. Her bosses enlist her as part of a dwindling skeleton crew with a big end-date payoff. Soon entirely alone, still unfevered, she photographs the eerie, abandoned city as the anonymous blogger NY Ghost.

Candace won’t be able to make it on her own forever, though. Enter a group of survivors, led by the power-hungry IT tech Bob. They’re traveling to a place called the Facility, where, Bob promises, they will have everything they need to start society anew. But Candace is carrying a secret she knows Bob will exploit. Should she escape from her rescuers?

A send-up and takedown of the rituals, routines, and missed opportunities of contemporary life, Ling Ma’s Severance is a moving family story, a quirky coming-of-adulthood tale, and a hilarious, deadpan satire. Most important, it’s a heartfelt tribute to the connections that drive us to do more than survive.

This year's Kirkus Prize for fiction winner is a somewhat original take on the post-apocalyptic genre. Ling Ma's Severance is referred to as "deadpan satire," and Audible classifies this novel as Fiction/Humor. The latter isn't quite accurate, mainly because the story isn't funny. It is, however, clever at times. The story is slow at first, especially for a post-apocalyptic novel, and it never really turns into a page turner. Ma's literary dystopia deals in loneliness, routine, loyalty (to a fault), and documentation.

The narrator of this audiobook, Nancy Wu, sounds a lot like Siri or Alexa. This was annoying at first, but I didn't notice it as much after an hour or two. I'm pretty certain it was not intentional, but her droning, robotic speech patterns somewhat match the tone of this audiobook. I've got mixed feelings about Severance. It's one of those books you don't necessarily love while reading/listening to it, but you like it more after you're finished with it. With all the great performances I've heard this year, I find it hard to believe this performance worthy of the AudioFile Magazine, Earphones Award Winner. It's not terrible, but it's not on the level of some of the better audio performances. If you liked Station Eleven, this book is probably one you will like as well.

The most witty Sci-Fi

Highly recommend to anyone, especially when COV-19 unfolds ... ah, how our beloved capitalism is making us all fevered

I throughly enjoyed the story, at times it shocked me with the changes in tone, odd descriptors that contributed to a general feeling of uneasiness throughly the book (which works well for a novel about the disintegration of society due to a virus). Nancy Wu’s narration fit well with the tone of the story, and I really felt that she was Candace. No spoilers, but the ending was particularly good. Not predictable, but it felt like an ending that made sense and fit with the characters personalities and the general plot of the novel. It didn’t feel inevitable, it felt like it belonged.

You can feel the utter desolation in NYC in this virus-driven apocalypse scenario in ways I’ve never felt reading an apocalyptic scenario ft NYC before. It felt like a vivid dream or a reality I’ve felt firsthand- something so much THERE in my mind that saying “I only read it, heard it on audiobook,” feels like a joke. Ling Ma has completely reinvented the sub genre for me. I’ve felt mostly bored with end of the world scenarios since I found out I was biologically Jewish & didn’t need to fake Christianity anymore, as it were. When it’s been the only thing dreamed of for decades as a reality, fiction is just boring at best or overly dark at worst, but Ling Ma accomplished both emotional bleakness overlaid with that most human feeling of all - hope, inspite of- in ways I’ve not ever experienced outside of religious texts or sermons. I’m really glad I bought this via Audible after seeing it recommended on some Booklr/Literature/Debut Authors/some blog or another’s page because I thoroughly enjoyed this novel & can’t recommend it enough.

I loved this. A wonderfully imagined story, with a compelling and original central character. I prefer sensory details to psychological ones, and the writing manages to be frank, smart and full of atmosphere all at once, which I really enjoyed... So well done (and read).

I feel so fortunate to have found this book.

The headline of my review says it all.

In my very, very humble opinion, this novel, its author, and its narrator deserve all of the accolades they have received and more. if you're looking for another cut-and-dry dystopian thriller, this isn't going to be it. This is a book about love, family, memory, and the inherent loneliness of the human condition; but also, and above all, the inherent capacity we have as humans to have hope, even when it seems there is none.

Nancy Wu's performance is breathtakingly realistic in its portrayal of all of the novel's characters, most notably the nuances of Candace's mother. From the main cast to the most fleeting of supporting characters, I felt like I knew and could visualize each one of them; not only because of Ma's beautiful yet true-to-life writing style, but because of Wu's performance.

Do yourself a favor and get this book. It's definitely one that I know will stay with me for a long time.

Floating through the apocalypse

Ling Ma has written a page turner with the story of Candace Chen, a millennial office worker bee who finds herself caught up in a civilization ending epidemic. A fungal infection named Shen fever is rapidly making almost everyone other than Candace into mindless automatons endlessly repeating familiar actions until they starve to death. Candace writes a blog called NYGhost and she is moving through this story like the ghost in her blog. Terrifying changes to the world are happening all around her but she is mainly concerned with finishing the employment contract she signed at her firm. Meanwhile the streets of New York become emptier and emptier until she is almost the only one left.

The story alternates between the road trip she goes on with a small group of survivors after leaving New York and her family and work environment in the city. The descriptions of Candace's thoughts and actions are very strong, but she is strangely detached from the world both before and after the epidemic. Her Chinese immigrant parents have died before the start of the story and she has only one brief relationship with a neighbor in her apartment building. Other than that she does not appear to have any friends or other than superficial contacts. Maybe that is why she is resistant to the fungus. The book offers no explanation.

I'm not a fan of apocalypse fiction and I understand that the theme of a global epidemic has been used before and perhaps other parts of the plot have as well. Still, I believe that this novel is very well done. It made me think for a while after finishing it. The narration is sort of flat but it feels like a good representation of millennial speak.

The book ends abruptly but I don't know if another ending is possible. I thought she might meet up again with her Brooklyn boyfriend, but that would be a too happy ending. Perhaps if Candace had engaged more with the world she wouldn't have ended up as a ghost.

On and On about nothing!

She went on and on about nothing. The story line was all over the place!

I love apocalyptic books....this is that, but I just do not relate at all with the main character. I tried to make my way through it but just could not get into it.

A long build up and then nothing!

I was very excited to listen to this book but was very disappointed in the end. The author takes you on a very long journey and then leaves you with nothing in the end. I would not recommend invest hours of your life on this story.

I am giving this book 4 stars, because I recognize that this is a book of good quality. It is well written and is built on a good premise. However, it was definitely not for me and I was not even able to finish it. In fact, I blame my disinterest in reading in January on me trying so hard to get through this book. This book is so gloomy, so dismal, that I just couldn't bear to keep going with the book. The book takes place in two timelines, before and after the outbreak of the Shen fever. Both timelines felt 'suffocating' to me, which I actually find really impressive, and think that it conveys a really good message. However, as I said, I had to force myself to read the book because I empathize too much with the characters, and in the end I decided not to even finish it.

I recommend this book to anyone who does not mind a darker atmosphere in the books they listen to.