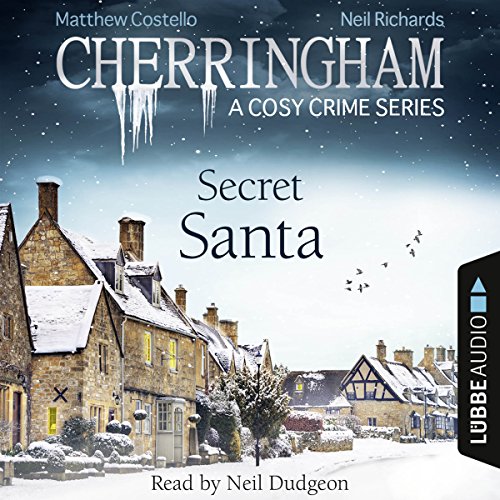 Bill Vokes has played Santa at the children's Christmas show for years. But with the show just hours away, he vanishes with no explanation. The whole village is baffled. Did something bad happen to loveable Bill, upstanding citizen, churchgoer, life and soul of the party and the holiday season? Jack and Sarah are on the case - and soon discover there are secrets about this Santa that no one could have imagined...

Cherringham is a serial novel à la Charles Dickens, with a new audio episode released every two weeks. Set in the sleepy English village of Cherringham, the detective series brings together an unlikely sleuthing duo: English web designer Sarah and American ex-cop Jack. Thrilling and deadly - but with a spot of tea - it's like Rosamunde Pilcher meets Inspector Barnaby. Each of the self-contained episodes is a quick listen for the morning commute, while waiting for the doctor, or when curling up with a hot cuppa.

Co-authors Neil Richards (based in the UK) and Matthew Costello (based in the US), have been writing together since the mid 90's, creating content and working on projects for the BBC, Disney Channel, Sony, ABC, Eidos, and Nintendo to name but a few. Their transatlantic collaboration has underpinned scores of TV drama scripts, computer games, radio shows, and - most recently - the successful crime fiction series Cherringham.

The narrator of the audiobook, Neil Dudgeon, has been in many British television programmes including the roles of "DCI John Barnaby" in "Midsomer Murders" and "Jim Riley" in "The Life of Riley". He is also known for his film roles in "The Nativity", "Sorted" and "Son of Rambow". In 2012, Dudgeon starred as "Norman Birkett" on BBC Radio 4's Afternoon Play series written by Caroline and David Stafford.
©2017 Bastei Lübbe (P)2017 Lübbe Audio

As always, wonderful storytellers and perfect narrator. Thanks for an engaging holiday respite in Cherringham!

really wish there were more in English! I have up to episode 18 but can't find the next chapters read by the same narrator

This crime series is a nice way to spend time being entertained - the characters are interesting - there isn't sex, gore, and horror - the focus is on people, their behavior and lives.

I like the way this series skips months and years and the people are changing and growing over time - yet friendships stay the course.

The ideas the authors come up with for the mysteries to be solved are good - there are some really interesting twists and observations of human behavior and lives and choices.

The narration is very good.

love this series - we really got into it -- is disappointing that beyond nr 19 in the series - the books are only offered in german. i hope audible considers offering the remaining books in english soon.

More, please!!!!! Love this series, please do more. A fun perfect bite of a mystery. Neil Dudgen is a perfect narrator for this series!


So, back to Cherringham after reading several other books. This is novella 25 in the series, and I’ve enjoyed this one and the other 24 before it.

I love Jack and Sarah and all the little mysteries they solve.

This one was about a missing Santa and a robbery that happened years before. And to answer the reviewer who wanted to know why the robber was let get away: the robbery happened over 20 years ago so the statute of limitations had run out AND he had none nothing but good things since he made that mistake. It was another cute story and you couldn't help but like the ex-robber Bill.

Unfortunately, I’m a little lost. At the end of story 24, A Death in the Family, which had nothing to do with Jack’s family, Jack got a call from the United States telling him that his daughter and son-in-law were in a serious car accident and it was barely mentioned in this story, and I do mean barely, but that’s it. Not how long Jack was gone, how his family was, nothing. I didn’t like that at all.

As to the narration: Neil Dudgeon is absolutely wonderful.

This is a terrific series and Neil Dudgeon does a great job on it. Looking forward to more!

I love all of these Cherringham mysteries. Easy listening, but also very engaging. I love trying to solve the mysterious along the way.

What happened? Unimaginable and Predictable

I've enjoyed the other books in this series so I don't know what happened to this one. It reads as though it was written over night. Ex-cop Jack spent more time drinking than thinking and Compute whiz Sarah was written to miss the obvious. It was all very sad.

A really great listen all round!

Where does Secret Santa (Cherringham - A Cosy Crime Series: Mystery Shorts 25) rank among all the audiobooks you’ve listened to so far?

These stories are just so comfy, like your favourite slippers. The plots are believable, Neil Dudgeon is just fantastic at narration, and I am always desperate for the next story from these writers. Keep them coming!

The ease and flow of the plot

His voice and style of performance is really relaxing

I love these books and if you like a straightforward whodunnit they are just the job!

I love these stories, the characters, the village & Jack sounds so nice 😃 These mysteries are everyday type of things that could happen in any village. Please Neil Dudgeon read them all as soon as possible so we can enjoy listening to them.

Really enjoy the mix of characters each episode brings to the established cast. Beautifully warm and funny too. Superbly narrated.

Please, please can we have episodes 22 to 24 compilation available in English in Audible, rather than just in German? As we have missed those three out.

Where are the next Cherringham stories

Loved every bit of it, as usual. Always interesting.
AUDIBLE get a move on and record more in this series please, lots of people waiting!

Very well written and very well read. It will keep your wondering what is coming next

Neat little novella which had an entertaining story line and read brilliantly. As one of a series it kept its credibility. Worth a read / listen .

Brilliantly written, brilliantly read. I love listening to all the Cherrinham mysteries. I can't wait until the next.

loved it. shortish, kept my interest just right for a relaxing afternoons listening by the fire

That was a very good story with a feel good factor, a nice light hearted tale

A friend put me onto this series which I am thoroughly enjoying. I have more books in my wish list to follow-up.
Loving the mystery!

When will there be more?

It felt like revisiting old friends listening to Jack and Sarah’s latest mystery. Thoroughly enjoyed this and all the other books and can’t wait for those last few stories to be released in English.

I love this series what more needs to be said. Just a good light read

Cosy crime is a relatively new genre for me but I am finding it refreshing after more intense crime novels. Although lThis is a well written story but, as always, the narrator is what held my interest and made the experience 5 star

I am a avid audible listener. I simply will not be able to listen to this book because of the narration. It is forced, annoying & over the top.

In future the narration should be tested with listeners.