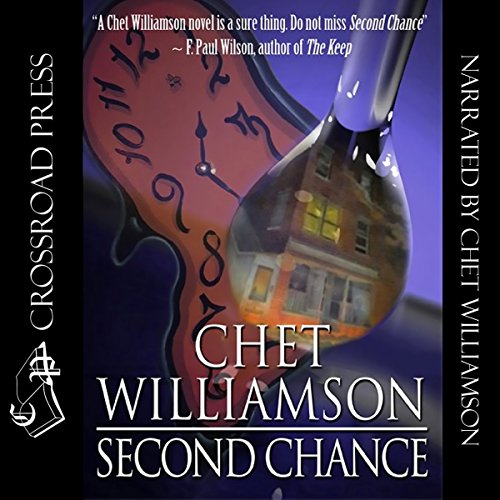 A breathtaking novel of dark suspense and bittersweet nostalgia, Second Chance breaks new ground for a writer whose work critics have favorably compared to such disparate writers as Camus, Cheever, and Stephen King. In Second Chance, Chet Williamson defines a generation and gives listeners the ride of their lives through a disquietingly different and threatened America.

Thrills, romance, and nail-biting suspense combine to create a novel in which a Big Chill-like gathering of old friends could lead to the real "Big Chill" for every person on Earth.

It all begins innocently enough. Woody Robinson, a successful musician, gathers his baby-boomer friends and recreates an evening in 1969 out of nostalgia for his long dead love, Tracy. The party quickly becomes a wake for lost ideals, and then something more, as time and fate play wonderful and terrible tricks on the celebrants. By the evening's end, Tracy is back in Woody's life as though she had never left. But there is another change as well, a shocking one.

His name is Pan. An environmental terrorist who wants to save the world by destroying humanity, he has the deadly viral ammunition to do just that. Pan will prove that the darker side of the 60s isn't dead - it's only been sleeping. Now it's awake and furious. And only one man and one woman can stop the nightmare.

With the swirling color and magic of a Fillmore West poster, the hallucinogenic impact of a Jim Morrison lyric, and the wistful voice of early Dylan, Second Chance is an unforgettable tale of love, loss, and redemption, an electrifying synthesis of past and present that will enchant its listeners today and haunt them tomorrow.