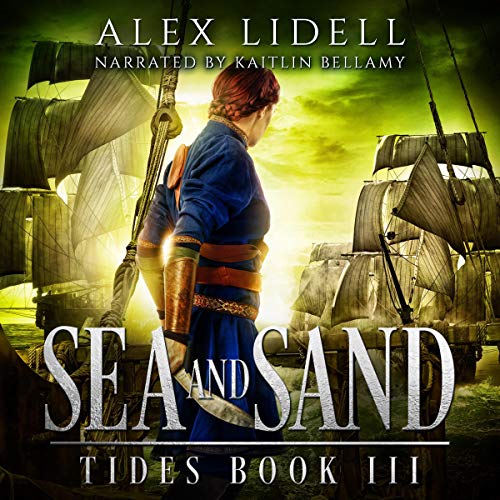 An impossible mission. Dangerously growing magic. A distrustful crew. Can Nile beat back the rising tide of war before it’s too late?

Six months have passed since Princess Nile Greysik changed the course of the Tirik war and earned her place in the Felielle navy . . . or thought she did.

With the war taking a violent new turn, Nile - joined by a cryptic empath named Kyra - sails out to beg support from the isolationist Diante Empire. But with a chauvinistic crew waiting for Nile to fail and even Domenic questioning her authority, one wrong step could strip Nile of her command mid-voyage.

When a terrifying new evil strikes their ship, Nile begins to understand the awful truth about the enemy they’re facing - and this time, not even her wind calling may be enough to save them.

Sea and Sand is the explosive third novel in the Amazon best-selling Tides series, a seafaring adventure of duty, love, magic, and a princess’s quest to protect her kingdom on her own terms. Recommended for fans of Sarah J. Maas and Tamora Pierce.

Another Installment of a Great Series!

An ending that left me wanting to know more! I mean they just took over an enemy ship they had been prisoners on!! Cunning and brave this team is exciting and one I need to hear more of. Hopefully book 4 is coming soon cause I need more of Niles in my reading life :)

I love everything about this series!!

I genuinely cannot say enough about how much I love these books. The characters are nuanced, and you can't help but love each one (flaws and all). I love a good found family book, and so enjoy the way the characters interact, fight, love and ultimately support one another. This book had some of Tam and Aaron (who I adore), and gave some insight into Catsper, who has always intrigued me. Nile and Domenic's relationship continued to be passionate and fraught and always keeps me hooked in.

I was concerned I would not like the addition of a new narrator point of view, but really appreciated and enjoyed Kyra's character, and thought she was a great addition to the group. Her relationship with Catsper added to my enjoyment of the book.

Finally, Kaitlin Bellamy is a truly gifted and AMAZING narrator, and brings the characters to life so beautifully. My only very small question was about the accent for Kyra... Southern? It felt a bit jarring with the other character's accents, but I grew to enjoy it.

THANK YOU for this series. Alex Lidell, please, please, continue writing these books, as they somehow feel so relevant to our current political climate, and yet are a refreshing, deeply engaging, and uplifting escape.