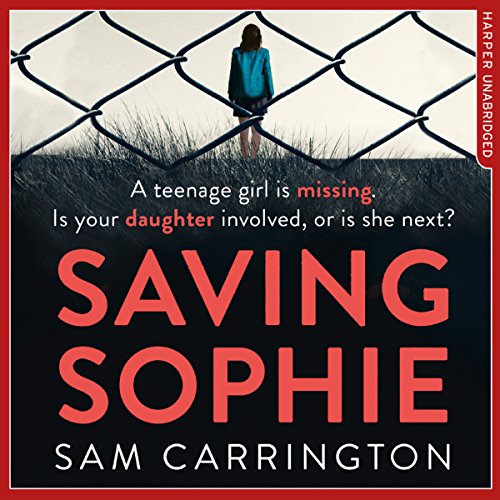 " Saving Sophie is a twisted rollercoaster of a debut.... Sam Carrington is definitely one to watch out for." (Lisa Hall, author of Between You and Me)
"I was hooked.... I devoured this story in one sitting. From the moment 17-year-old Sophie arrived home drunk, with no recollection of the evening, and we discover another teenage girl has gone missing, my stomach rolled with anxiety.... I was on the edge of my seat as a body was found, and when it becomes apparent that Sophie could be the next target I read through splayed fingers. Sam has a rare gift for writing.... In this book the character development is as good as the writing and I found myself really rooting for Karen and the ending made me gasp." (Louise Jensen, author of The Sister)

A teenage girl is missing. Is your daughter involved, or is she next?

Your daughter is in danger. But can you trust her?

When Karen Finch's 17-year-old daughter, Sophie, arrives home after a night out drunk and accompanied by police officers, no one is smiling the morning after. But Sophie remembers nothing about how she got into such a state.

Twelve hours later Sophie's friend Amy has still not returned home. Then the body of a young woman is found.

Karen is sure that Sophie knows more than she is letting on. But Karen has her own demons to fight. She struggles to go beyond her own door without a panic attack.

As she becomes convinced that Sophie is not only involved but also in danger, Karen must confront her own anxieties to stop whoever killed one young girl moving on to another - Sophie.

A taut psychological thriller, perfect for fans of The Girl on the Train and I Let You Go.

Don't let the title fool you. I don't think anyone really wants to save Sophie! The premise of the book is that 17 year old Sophie, potentially under threat from a killer who murdered her good friend, seeks comfort and guidance from her mother, an agoraphobe who suffered her own attack; and her father, an emotionally non-present forest ranger. Karen, the mother, made me want to attack her too. Her attempts to "help" her daughter were sadly lacking, and I don't know if the author meant to, but mom seems hell bent on sending Sophie right into the killer's sights. A selfish and damaged woman st best, Karen evokes no sympathy from this reader. The book earns three stars for a decent mystery underlying the terrible characters- but the story barely survives these immature and emotionally stunted characters.
The story is told from three points of view: mom, Sophie and detective. The chapters are very short so the story seems choppy and awkward.
The narrator did a fine job. She also narrated the book "Daisy in Chains," which would be a better use of the reader's credit.
Overall: It's not horrible, but it's just not that good, so I can't recommend readers to pick this one up.

Would you try another book written by Sam Carrington or narrated by Antonia Beamish?

Would you ever listen to anything by Sam Carrington again?

Extremely weak plot. There is no way a mother would act in this way about the risks to her daughters life.

Antonia Beamish gives a great performance and most of this story is gripping and engaging. The final act feels rushed though and the last few chapters spoil the book. No amount of suspension of disbelief can make the finale of this book even remotely plausible.

I thoroughly enjoyed this book. The story was well told and well performed. I loved the way that the end had a twist. This book had me reading non- stop until I finished it.