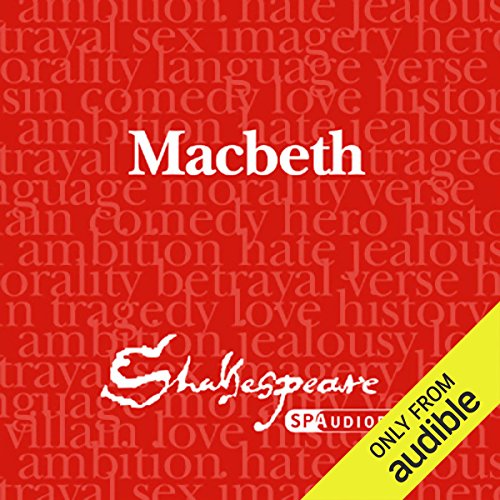 Just for the play

Where does SPAudiobooks Macbeth (Unabridged, Dramatised) rank among all the audiobooks you’ve listened to so far?

I isten for the play and not for the dramatization by famous actors. Thst is the reason for choosing this edition. It is a very adequate rendition of the play for listening purposes.

It seems that these actors studied Shakespeare in depth. Never have I heard, on stage or anywhere, performers who seem to understand Shakespeare's vision, imagination, words. I have so far heard three plays in the Smartpass series and all exceed my expectations. Highly recommended for all, including teachers/professors, novices, and skeptical Shakespeare lovers who cringe at most performances. Perhaps it is something about NOT being on stage, but there is no Macbeth like that we hear in Act V--his crazed laughter alone...Worth twice as much as I paid.

I love Shakespeare's work, but this audio version of Macbeth thrills me even more! The performances and audio effects were engaging and entertaining. No flattery. This audio version is great.

My favorite characters in this play are the witches - and the decision of the actors or directors to speak very, very slowly was probably intended to impart an ominous feel, but it felt more "hooked-on-phonics". The very, very slow speech very nearly ruined the play.
The role of Banquo was fulfilled very well by the actor. The other characters were adequate. In a few places the actors change the lines a bit (a few words only), which was disappointing. Overall, the reading is OK, not great.

With a full-cast, Macbeth is read as if watching the play. It is more enjoyable to lesson to with the text.

Made the 'Reading' of This Play Sustainable.

Extremely valuable for teachers and students. A very good performance. Useful notes at the end.