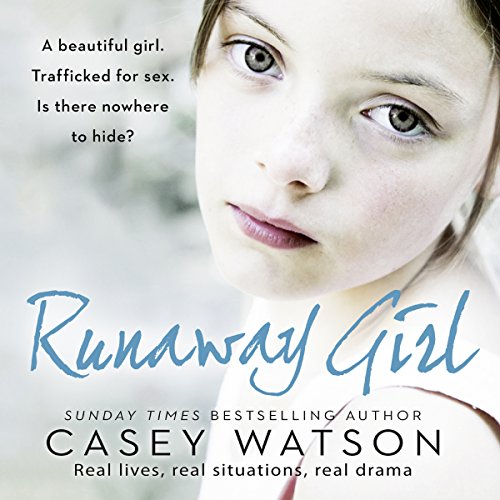 Fourteen-year-old Adrianna arrives on Casey's doorstep with no possessions, no English, and no explanation. It will be a few weeks before Casey starts getting the shocking answers to her questions....

Brought to Casey as a short-term emergency placement, 14-year-old Adrianna arrives with nothing but her gratitude. Having turned herself in to a social services office some 100 miles away, she has no possessions, no English and, apparently, no history - not that she's willing to share, anyway.

She is a beautiful young Polish girl, with the bearing of a ballerina, but is terrified, malnourished and unwell. And, having slept rough for some time (the little they do know about her), she spends much of her first days with Watsons asleep in bed.

Growing concerned about Adrianna's well-being and her persistent high temperature, Casey decides to call in the GP. But, to her surprise, Adrianna becomes almost hysterical about being examined and, given her refusal to talk - even via the interpreter they've brought in for her - Casey's fostering antennae begin twitching. Where has she come from? And why is she so terrified to be touched? What has happened to make her so ill and scared?

It will be a few weeks before Casey starts getting answers to these questions. Shocking answers - ones that throw up a whole host of new questions and the beginning of a journey to find justice for Adrianna and, more importantly, a future and a home.

Worst Reading Of A Book

The story line was okay, however, the person reading the book was just awful! She read too slow, drawing her words out so much that the book became difficult to pay attention to. I found myself drifting off because she was so boring.

I was so disappointed with this book. I thought the story seemed very interesting and was looking forward to starting it. Unfortunately I could not get past the narrator’s voice. I am honestly not super picky about the narrators as a whole. I have stuck out many that have not been great but were tolerable enough and I liked the story enough to make it to the end of the book. This was not the case for me with this book. I tried to stick it out but simply couldn’t. I still plan to read the book but will be getting the printed version.

Would you try another book from Casey Watson and/or Kate Lock?

I don't think I'll buy another Casey Watson book. I wasn't fond of how long it took to tell the story. A lot of tangents leave you desiring a more direct route to how things are progressing.

Kate Lock took the accents a bit far. The voices she attributed to the characters seemed almost cliche.

The most interesting aspect is the basis and experiences the story is based on.

It wasn't as interesting to listen to though.

Kate Lock took the accents a bit far. The voices she attributed to the characters seemed almost cliche.

If you could play editor, what scene or scenes would you have cut from Runaway Girl?

I would cut the excessive descriptions of certain things.

I've never left a negative review for anything before but this narrator is the worst I've ever listened to. Her accents are terrible, and in some cases, offensive. Constant unnecessary pauses. Emphasises words where no emphasis is needed. Overall it's seriously grating to listen to. I enjoy Casey Watson's stories but won't buy any more if they're by this narrator. I can see by other reviews that people agree with me

story isn't bad but narrator is so incredibly annoying i couldn't listen till the end. reading slows down to unbearable pace and voice goes from loud to whisper for no apparent reason, horrible imitation of polish accent..... first negative review i ever gave but very disappointed.

Although I had to listen at 1.25 speed as was having trouble listening to the very slow commentary, not entirely sure as to whether I will listen to anymore as think I've been spoilt with the Cathy Glass collection

another good story about the life of another child that Casey looks after. a good in sight to a different way things work for a child in care.

One of the best books I have read/ listened too...
Thoroughly enjoyed it and recommend this

Could only listen to 3 minutes of this Narrirator

I got 3 minutes into this book and stopped. This narrator is horrible. So sake and slow i genuinely couldnt listen to a minute more. Will be returning. Sounded like a good book from the blurb so rated story accordingly.