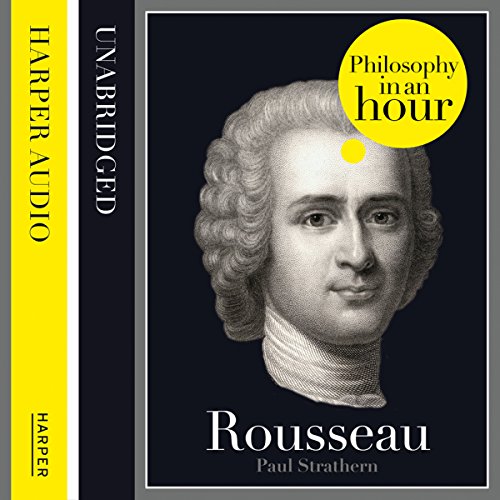 ”Well-written, clear and informed, they have a breezy wit about them...I find them hard to stop reading.” (New York Times)

”Each of these little books is witty and dramatic and creates a sense of time, place, and character...I cannot think of a better way to introduce oneself and one's friends to Western civilization.” (Boston Globe)

”A godsend in this era of the short attention span.” (New York Times)

Philosophy for busy people. Listen to this succinct account of the philosophy of Rousseau in just one hour.

In Rousseau we encounter a walking ego, a naked sensibility - his arguments are both deeply stirring and deeply inconsistent. Yet whilst his contemporaries Kant and Hume may have been superior academic philosophers, the sheer power of Rousseau’s ideas was unequalled in his time.

It was he who encouraged the introduction of both liberty and irrationality into the public domain, lamenting how ‘man is born free but everywhere he is in chains’.

This audiobook is an expert account of Rousseau’s life and philosophical ideas - entertainingly written and above all easy to listen to. Also included are selections from Rousseau’s work, suggested further reading, and chronologies that place Rousseau in the context of the broader scheme of philosophy.

Rousseau: Philosophy in an Hourに寄せられたリスナーの声

An excellent narration of Rousseau. A helpful guide to any aspiring philosopher or student of Rousseau.

It is the best one hour on Rousseau that I have listened to so far. It a master piece!

I recommend this to every student of philosophy, sociology, politics and psychology.

I like the story and the style of presentation.

The narrators, as always, performs excellent.

Surely something more interesting can be said of Rousseau than that he was a bit of a weirdo, not very nice, and that he had a lot of influence on the world. Minimal effort made to actually explain his ideas or find anything of any interest other than vague blandishments about the typical bogeymen of the conventional liberal bore.