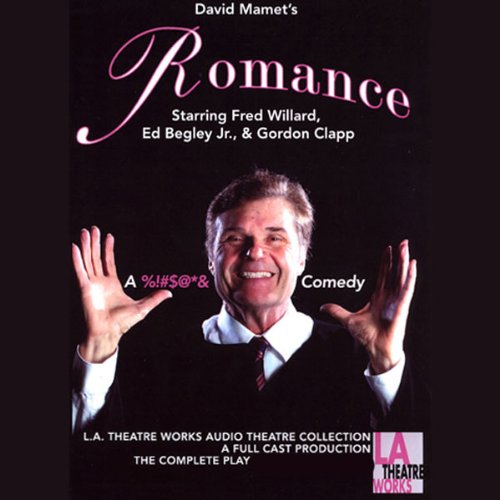 In this outrageous new comedy, playwright Mamet skewers everything from sexuality to the justice system to world peace. In a world where nothing is as it seems, prepare to be offended!
(P)2007 L.A. Theater Works

Pulitzer winner Mamet lards on politically incorrect jokes, massive irony, and expletives in this brief courtroom farce. An anti-Semitic attorney (Ed Begley, Jr.) representing a Jewish defendant (Steven Goldstein) seeks to interrupt the trial so that his client can use his chiropractic skill to bring about world peace. Of course, the prosecutor (Gordon Clapp) objects while his disgruntled male lover (Noah Bean) harasses him by cell phone and, later, in person. An overmedicated judge (Fred Willard) more or less presides. Neil Pepe, who directed the 2005 off-Broadway premiere, does the honors for this lively West Coast reading before an appreciative studio audience. The fine but apparently under-rehearsed cast doesn't quite pull off the precise comic timing the play requires for full effect.

Awful! Could I get a REFUND?

First, let me say that I consider Mamet’s Glengarry Glen Ross a 20th century masterpiece. However this was dreck! I don’t mind that Mamet gleefully relished being politically incorrect and offensive. It just wasn’t funny--AT ALL! The humor was just plain silly, stupid, crass cornball. Yes, the comic timing was great and I loved hearing the late, great Fred Willard but it just felt that Mamet was just having some fun seeing how disgustingly offensive he could be. I have seen old Hee Haw shows that were more sophisticated and searing in their wit. Waste of money!

A funny play but a rather forgetable work

I will say this I laughed lots during Romance and the play is definitely not for the politically correct but I was a bit taken aback that a great dramatist like Mamet would write such a silly and entertaining play with no substance that I could find.

Mamet has written some great comedies (Speed the Plow) but this is one of the only works I can think of that exists solely to be silly and make the audience laugh. The play is bordering on absurdist in ths structure and dialog but I could not really irk out a real theme or point in this work.

There is mention of justice, arab/jew/christian relations, and sexuality but I am not sure how Mamet wanted to tie those ends together. But as a whole a real funny (if empty calorie) play.

The highlight is Fred Willard (Best in Show) as the judge with a bad case of hay fever.