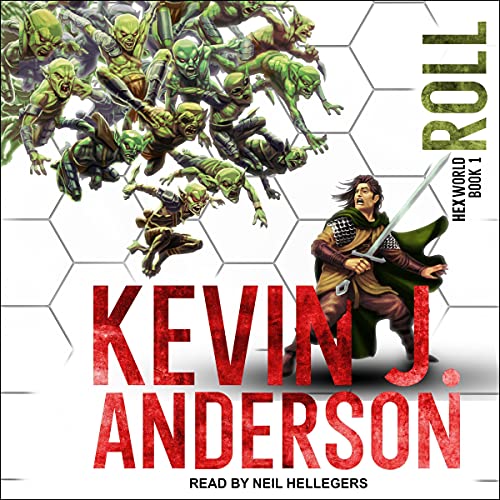 It was supposed to be just another Sunday night fantasy role-playing session between friends.... But after years of playing, the game had become so real to David, Tyrone, Scott, and Melanie that all their creations now had existences of their own. And when the four outside players decide to end their game, the characters inside the game world - warriors, scholars, and the few remaining wielders of magic - band together to keep their land from vanishing.

Now they must embark on a desperate quest for their own magic. Magic that can twist the Rules enough to save them all from the evil that the players created to destroy their entire realm. Experience the start of a Portal Fantasy Saga from the international best seller Kevin J. Anderson, author of the Dune Prequels, Duke of Caladan, numerous Star Wars novels, and over 160 other books.

struggled to get into this. like a weak version of Jamanji. normally love this author and this won't be the last of of his books..

I got to about 25% into the book--throughout which I found my attention constantly wandering--before returning it; only the 3rd book I've returned in 6 years.

While the premise promises an interesting slant on the LitRPG genre, the execution is sorely lacking. The story seemed disjointed (although that may have been the effect of my wandering attention,) with quests for various MacGuffins driving it. The characters were uninteresting, and I found myself not caring about them.

The narration was choppy, and for my taste, too fast, with odd pauses and pronunciations in places (e.g. "be calm" sounded like "become,") and in a couple of places a missing article, which took me out of the story.