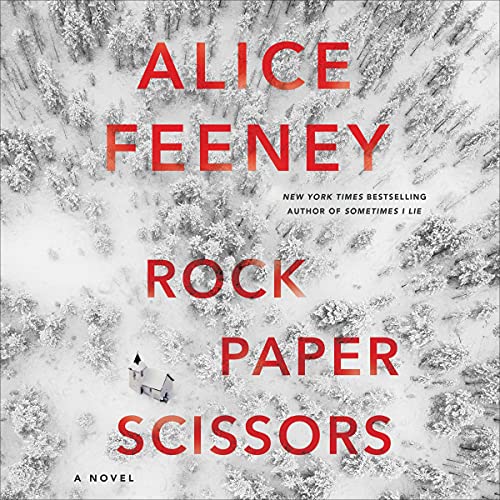 Think you know the person you married? Think again....

Things have been wrong with Mr. and Mrs. Wright for a long time. When Adam and Amelia win a weekend away to Scotland, it might be just what their marriage needs. Self-confessed workaholic and screenwriter Adam Wright has lived with face blindness his whole life. He can’t recognize friends or family, or even his own wife.

Every anniversary the couple exchanges traditional gifts - paper, cotton, pottery, tin - and each year Adam’s wife writes him a letter that she never lets him read. Until now. They both know this weekend will make or break their marriage, but they didn’t randomly win this trip. One of them is lying, and someone doesn’t want them to live happily ever after.

Excellent in Every Way

This is the first book by Alice Feeney I’ve read, and it was superb. I’m going to read all of her work. I’m a pretty experienced thriller reader/listener, but this one had me fooled until the end. And, the narration was perfect.

It isn't very often I find a book that can keep me guessing but Alice Feeney has done just that with this novel! The best thriller/suspense book I have read this year!

This book has every aspect to draw a reader in and keep them wanting more..then a sudden realization in the book takes the reader aback and put the pieces of the puzzle back together. What a fantastic stimulating psychological thriller!

Do not understand the high rating

Shallow, one dimensional, bitter characters. None is sympathetic. Plot twists do not make any sense.

I enjoyed the author's other books, but this one is a huge disappointment. The story is ridiculous and far-fetched. The characters are very one-dimensional and poorly developed. Bob the dog is the only likeable character.

Do not waste your time or money on this book. I only finished it in hopes it would make sense but it never did.

Too many twists in the end and they all just fell kind of flat. The last chapter was totally unnecessary.

Very Slow, But An Explosive Ending

This book starts out very slow and stays that way to about the last ten Chapters. I wasn't sure I would finish, but glad I did. There are major plot twists and surprises toward the end.

The narrators were good, but I felt almost no emotion from either of them. They sounded flat throughout the book, which may be the reason it felt so slow.

I do suggest you give this a listen though, because the last of the book is worth it.

The Queen of killer twists is back!

I been feeling for a Feeney book. I have all her books. Alice feeney writes the best diabolical plot twists. I love you lol!

I found this book recommended on a book review instagram page and it had a great review. I found it difficult to follow at times and the characters letters to each other a bit dull. It's not a must read, and I would call it mediocre, but I see others have loved it so you may too. It was a predictable tale told in an unpredictable manner. I did not find the male characters relationships with his wives believable.