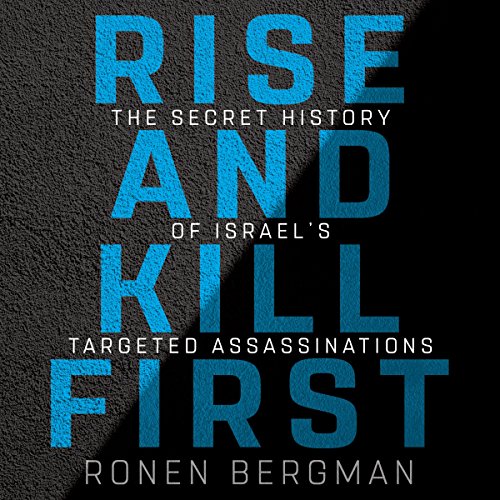 The Talmud says: 'If someone comes to kill you, rise up and kill him first.' This instinct, to take every measure, even the most aggressive, to defend the Jewish people, is hardwired into Israel's DNA. From the very beginning of its statehood in 1948, protecting the nation from harm has been the responsibility of its intelligence community and armed services, and there is one weapon in their vast arsenal that they have relied upon to thwart the most serious threats: Targeted assassinations have been used countless times, on enemies large and small, sometimes in response to attacks against the Israeli people and sometimes preemptively.

In this pause-resisting, eye-opening audiobook, journalist and military analyst Ronen Bergman - praised by David Remnick as 'arguably [Israel's] best investigative reporter' - offers a riveting inside account of the targeted killing programs: their successes, their failures, and the moral and political price exacted on the men and women who approved and carried out the missions.

Built from interviews with Israeli Prime Ministers as well as high-level figures in Mossad - and the country's military and intelligence services - Rise and Kill First includes never-before-reported, behind-the-curtain accounts of key operations and is based on hundreds of on-the-record interviews and thousands of previously unseen files. From statehood to the present, Bergman traces the gripping events and thorny ethical questions underlying Israel's targeted killing campaign, which has shaped the Israeli nation, the Middle East, and the entire world.

Excellent insight I to the state of Middle East

Through the story of the Mossad and the other Israeli intelligence agencies, we get a glimpse of the complexity of the situation in the Middle East. A lot of details on operations show how Israel works and the culture behind how they operate.

Very enjoyable book about Israel's secret services. The book is loaded with revelations and interesting facts. The narration is good.

I started this book a little sceptical as the author concedes the secrecy of the Mossad, but claims to have gained unparalleled unofficial insight through interviews with multiple Mossad agents across the period from 1948 till today. As the book continues with some remarkable stories, I started checking the internet alongside listening to the book. I have to say I found all of the stories that I checked to be corroborated by other sources.

As to the book itself, it is a fascinating and enthralling tale of decades of assassination covering not just Mossad, but the entirety of Israel's intelligence community. The narrative rattles along and I was surprised when I realised this book is 26 hours long.

There are a number of things that struck me. First is the sheer scale of this activity, well told with a good sense of how successive generations of operatives found reason to dispense with what many would see as "the rule of law". Second are the intimate links between the intelligence community with senior government; many Prime Ministers having served within these very same units earlier in their lives.

My over-riding impression, though, was Bergman's careful charting of this much-vaunted force losing any sense of moral compass. In recent times, Bergman describes how even senior retired officers, including one Mossad chief, feel its ruthless approach has become counter-productive. David becomes Goliath. That is not to say that he shies away from describing the appalling terrorist acts of the PLO, Black September and the rest, nor the very real threat from Arab countries and in more recent times, from Iran. But as one listens to the descriptions of discussions within Mossad and with politicians, it is fascinating to see how moral considerations are eroded until hardly recognised at all. Fascinating, enthralling, but appalling and sad.

One reviewer has talked about the author "having an agenda". I was intrigued as to what this might be, but for me, at least, it is less an "agenda" and more of an inevitable conclusion if one accepts the analysis that this book contains.

utterly gripping and a great piece of reporting...

probably the best audiobook I've ever experienced - why? - it recounts the complicated and potentially dry and confusing story of Israel's 70 years of enmity with its neighbours via a completely enthralling narrative. you come for the spy stories and learn the history too. a brilliant piece of work...

Not only is this book seemingly comprehensive on the topic, it is very well written and Rob Shapiro's performance is excellent. For those seeking to uncover more history on the work of secret services and some finer details on issues in the Middle East, this is an essential audio book. Some of the contents are simply sensational and others utterly jaw-dropping. Including local to international geopolitical perspectives, the contents will engage listeners looking to glean knowledge of the role of Israel since 1947.

Investigative Journalism at its best

One of the best Investigative Journalism books I have ever listened to. Ronen Bergman book is flawless and so well written, I could not put it down :) Narrated by Rob Shapiro who did an outstanding job !!

Outstanding research and factually gripping i was surprised how addictive the book was. well worth a listen.

It is so refreshing to read such an honest account by such a prominent person who really knows what the Israel government has done and continues to do without challenge. A must read for all nationalities. This is no ‘story’ . Excellent listen.

I have always found fact more interesting and exciting than fiction and espionage and its associated activities is my favourite genre. Some books claim to be definitive accounts and there is no doubt that some books I've read on the CIA, KGB, Stasi etc have been excellent. A recent purchase on Audible of GCHQ is superb. This book, however, has three main pillars to it's narrative; the history/politics of the Israeli security forces, the people and the operations it carried out. Mossad, Shin Bet (Shabak) and Aman are the three principal organisations and this book explains the relationships between them.
I'm old enough to remember the 1967 Arab-Israeli conflict and over the last fifty or so years there seems never to have been a time when there was peace in the Middle East. Many of the vast number of operations carried out by the Israeli agencies are described in thrilling detail here and notwithstanding the calamities of some of them, they are superbly informative in terms of motive, preparation and execution (often literally). The PLO, Hamas, Hezbollah have presented Israel with an existential threat for decades and this has been met by unbelievable courage and ingenuity in the face of murderous fanaticism.
Also of interest is the number of Mossad, Shabak etc personnel who subsequently move into Israeli politics having "done their share" of deadly operations. A sharp contrast with Western politicians and their background of Oxbridge debating societies or trade unionism!
I can't recommend this narration too highly.

By far the best work compiled on the Israeli intelligence services and the proactive efforts taken to defend the state from internal and external attack. Expertly written and narrated.

a bit Long, it became a bit ponderous and tedious towards the end, but non the less a very insightful and fascinating account of Israeli assassinations and the middle East conflict. I learnt the how it started and flamed into the mess that it is today. both sides points of view were made clear and also the fact that without a complete change of mindset and thinking, the middle east conflict will never go away and will just keep on escalating.

Fantastic book which is required reading for anyone interested in the modern history of the Middle East.

I was somewhat reluctant to purchase this audiobook but had watched Munich again at the time (the Spielberg movie) and thought i would try it. It is fantastic, i loved every minute of it and highly recommend it.

One of the best contemporary histories of not just modern Israel, but the Middle East post Balfour Declaration.

While the book is engaging about the conflict in the start , it becomes disappointingly hasty about more contemporary events . I wish the author had spent more time about the solutions...

I thought I had a reasonable knowledge of Israel and it’s basic history however Mr Bergman has shown me that I had no idea.

This book provides a surprisingly unbiased history and certainly doesn’t shy away from the negative results delivered.

Despite the 25 hr play time, this book flew past.

More interesting than any spy fiction

It is inspiring, sad and incredible at the same time that such an organisation of intelligence and deadliness has been developed. The book explains the background to some of the most tumultuous terrorist acts and clinical assassinations. I read much of this before going to sleep... at first it made for a fitful nights rest, after a while the constant acts of terror and targeted killing becomes a matter of fact. It's ultimately a chilling insight to our Darwinian nature and what happens as a result of bring significant technology, organisation and determination. I sorry this still exists in the world but feel wiser for reading about it in this exceptionally well written book.

As a supporter of Israel, learning through this tome, the everlasting struggle to maintain a country whilst surrounded by the enemy, and succeeding.
Fills me with respect.

An interesting book on Israel's survival

I was interested to hear the success stories of targeted assassinations as well as the failures of Israel's secret services.
After many assassinations were carried out I could see how futile it is to kill an adversary in this manner.
The Palestinian counter attacks are always coming back to hit Israel's population.
It eventually became a vicious circle and it no longer matter who started first the hostilities.
I blame the politicians on both sides that have not tried genuinely enough to find a negotiated solution.
This situation is not sustainable for both Israel and the Palestinians.
I was glad to note that Ronen Bergman concluded his book with substantially the same notes.

Best comprehensive history of Mossad . Sourcing for this book is second to none. Mossad's strategy thought process on Iran.

Easily one of the best books l've ever read! stunning from start to finish. You won't be disappointed.

Awesome detail of history and events through time of success and failures. easy to listen to as each mission is a new story. highly recommended.