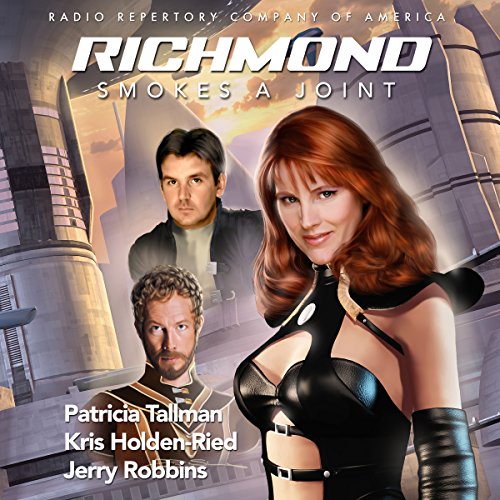 If you like your action with a hint of humor and a soupçon of sex, then Richmond Smokes a Joint will make you stand up and cheer. Bursting forth from the popular Anne Manx series, that felonious firebrand Jean Richmond (Patricia Tallman, Babylon 5, Night of the Living Dead 1990) is back, and taking the spotlight in her own cosmically wild adventure!

L. Sid Knee (Kris Holden-Ried, The Tudors, Lost Girl) has a secret. He knows the location of the mythical Sacred Plate of Marange. When he approaches Richmond's ne'er-do-well boyfriend Herm (Jerry Robbins, Powder River, Beacon Hill) about obtaining the plate, the treacherous trio take off on an intergalactic free-for-all filled with colorful crewmen, mysterious murders, dangerous double-crosses, and mommy talk.

Through its memorable characters, immersive sound design, and an original score, Richmond Smokes a Joint zips you from a secret safe to the caverns of Marange...where not even Richmond's considerable wiles and cunning might be enough to make her come out alive and on top. So, strap yourself in for a dizzying science fiction adventure so clever, even the title itself is a double entendre!

Would you listen to Richmond Smokes a Joint again? Why?

Yes. Well, I will subject my man to it on some shared commute in the future.

If you’ve listened to books by Larry Weiner before, how does this one compare?

No, I haven't listened to Weiner books before, but I wouldn't mind listening to more of his books.

Which character – as performed by the narrators – was your favorite?

Jean richmond - she has to be both sexy and sly, angry and cool.

No. This book was just for fun.

Jean Richmond and Sid Knee team up to find the nearly mythical, long-lost Plate of Marange. Richmond’s current boyfriend, Herm, tags along, financing the endeavor. Starting off in a strip joint, space shipping through the galaxy, and ending on an alien world, these adventurers, along with a cast of questionable participants, start turning on one another pretty quickly. Can Richmond remain true to any of her promises or does every man need to watch his back?

The story was really fast paced, as one would expect from a short piece. The humor was laced throughout this space treasure hunt, though it sometimes relied on puns (which aren’t my thing, but might be your thing). There’s plenty of grown up humor with the innuendos and occasional sex scene. There pretty much is just one female character, Jean Richmond, and, of course, I would have liked to have seen more ladies in the mix. Jean used her feminine wiles to trick the boys, and out right strip teased to get her way in some cases. I kept fluctuating back and forth on whether to root for her or offer to toss her in a cell myself; and that was one of the things I liked about this story.

The quest itself, the hunt for the Marange Plate, was nebulous, and a little silly. The story really focused more on the characters double crossing each other (which was pretty entertaining). See, it’s not just Richmond who has secrets and a hidden agenda. So there were plenty of characters who I thought might be ricking up the body count. Over all, this was a fun story for as short as it was and I think it would be great to share with other adults on long commute. This is a spinoff of the Anne Manx series and works fine by itself (and my curiosity is now peaked to check out Anne Manx).

The Narration: As you can see by the list of narrators above, this was a full cast! It was complete with accents and plenty of immersive sounds. Don’t worry, the sound effects and occasional music background did not over ride the narrators; their performance was clear, being enhanced by the effects.

Stay away. I was sucked in by the positive reviews. Listened to the whole thing hoping it would redeem itself in the end. It didn't. Stupid story, no real plot, juvenile non-humor (I like juvenile humor, but this didn't rise to that level). Overall one of the worst things I've listened to on Audible. You've been warned.