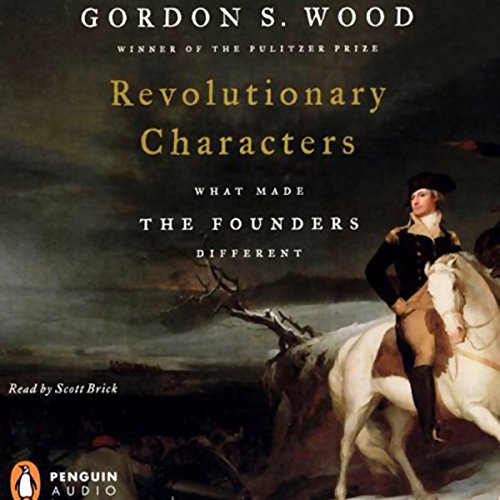 "Of those writing about the founding fathers, [Gordon Wood] is quite simply the best." (The Philadelphia Inquirer)

Even when the greatness of the founding fathers isn't being debunked, it is a quality that feels very far away from us indeed: Washington, Adams, Jefferson, Madison, and Co. seem as distant as marble faces carved high into a mountainside. We may marvel at the fact that fate placed such a talented cohort of political leaders in that one place, the east coast of North America, in colonies between Virginia and Massachusetts, and during that one fateful period, but that doesn't really help us explain it or teach us the proper lessons to draw from it. What did make the founders different? Now, the incomparable Gordon Wood has written a book that shows us, among many other things, just how much character did matter.

Revolutionary Characters offers a series of brilliantly illuminating studies of the men who came to be known as the founding fathers. Each life is considered in the round, but the thread that binds the work together and gives it the cumulative power of a revelation is this idea of character as a lived reality for these men. For these were men, Gordon Wood shows, who took the matter of character very, very seriously. They were the first generation in history that was self-consciously self-made, men who understood the arc of lives, as of nations, as being one of moral progress. They saw themselves as comprising the world's first true meritocracy, a natural aristocracy as opposed to the decadent Old World aristocracy of inherited wealth and station.

Gordon Wood's wondrous accomplishment here is to bring these men and their times down to earth and within our reach, showing us just who they were and what drove them. In so doing, he shows us that although a lot has changed in 200 years, to an amazing degree the virtues these founders defined for themselves are the virtues we aspire to still.

Not as informative as I'd hoped for

This was an interesting book, but not as many "new" things about the founding fathers as I'd hoped to hear.

And Scott Brick was not the best choice of narrator for this book. I usually enjoy his narrations, but he was a bit too low key and monotone for this type of book, and I found it hard to keep my attention on the content. A more animated read might have made this come alive a bit more.

I had been really looking forward to this book. And I will admit right up front that I like John Adams so I might be letting that cloud my judgement, but Mr. Wood is clearly not very impressed with him and it shows. I have listened to and read a lot of books on the the revolutionary period and based on this book you get the impression that Adams should not even be called a founding father. I stopped listening after the Adams chapter since I could no longer trust what the author was saying. I am sorry I wasted a credit on this book.

Wow. This book was amazing. Gordon Wood is a phenomenal writer. If I could have any writing style it would be his! The content is super fascinating too. Wood dedicated a chapter to the founding fathers he believed were the most influential in creating America. He had the obvious ones but he also had some surprising ones like Thomas Paine and Aaron Burr! I loved how he compared and contrasted them and brought them into the greater context of American history. That is, he didnt just talk about their lives but how their influence is still relevant in today's world. His section on public opinion and argument of how the founders created a culture that ultimately was their demise was the cherry on top of an amazing book. This was an audiobook and the narration is on point! 🌟🌟🌟🌟🌟/5 stars! Highly recommend!!!!!!

The book is good for a generally uninformed person to start on independence era history. It’s a decent starter on history of the founding fathers. Much better than a Wikipedia search

Basically, if you have read Chernows Washington or Meachem’s Jefferson this book is a quick summary.

The best part of this book is the first chapter. That would have been enough and it would be a really good 1hr book.

Gordon Wood is your typical liberal "founding fathers were not what you think they were" academic writer. While he is not as vitriolic as some, he is determined for us to see the founding fathers as aristocrats more self-serving and conniving than patriotic and noble. But I admit, I keep reading him. He is interesting and knowledgeable about important aspects of American history. For a more balanced and reflective interpretation of the founding fathers, I must recommend Joseph Ellis. I trust him more, but I do admit I can not ignore Wood's work.

What a waste of a credit!

Avoid this book at all possible! I wish i didnt even have to give it 1-star. I ordered this book to learn more about the founding fathers except what i got was a tearing down of the founding fathers. The author, clearly borrowing from other authors, could not form a single clear and new thought of his own. Yes, the founding fathers were human after all but to berate them to the point that their accomplishments are so minor to their imperfections. I totally regret this ordering this drivel. If i could get my credit back I would!

why would anyone ever write this. dry and slow, worse than my apush textbook, and that's saying something.

I'm sure it had good content and was very interesting, but I couldn't finish the book. It was kind of boring and the reader added an odd inflection to the ends of random sentences that I found quite unnerving.

If this topic is very interesting to you, I'm sure you'd probably like the book. If not, save your time.