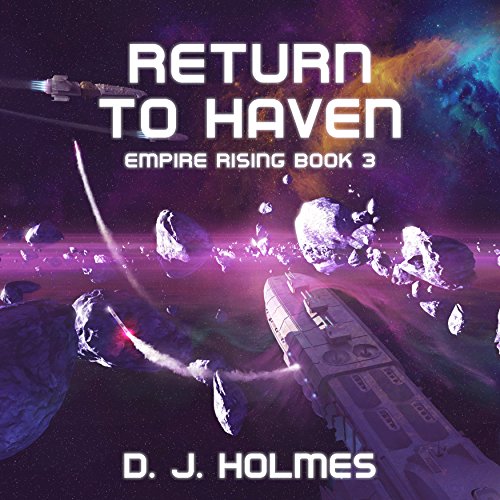 The revelation that the human race is not alone has sent shockwaves throughout Earth's naval powers. Suddenly all eyes have turned to Haven and the trade routes to the Vestarian and Kulrean homeworlds. Thinking he has nothing to lose, Haven's First Councilor puts into motion a plan that threatens to turn star empire against star empire. As a result, Captain James Somerville finds himself thrown into the thick of battle once again. Yet not everyone in the Admiralty is enamored with his brash style of command and this time, his reckless actions may finally catch up with him. Return to Haven is the third novel in the Empire Rising military sci-fi series.

I loved the series so far but I was broken hearted to hear the next book won't be available for audible.

So, the story itself is wonderful, but the occasional pronunciation issue by the narrator has marred the telling. I was letting it go as a possible American-ism, but "Glau-chester-shy-er" was just too egregious. It's "Gloss-ter-sher", although "shy-er" is a tolerable American-ised pronunciation. Also, given the naval nature of the series, the narrator should be made aware that "tonne" should sound as "tun", rather than "tone".
This isn't to say the narrator is bad by any means, rather, the quality of his performance is such that these unusual errors are notable by the contrast.

I thoroughly enjoy the three books so far and I'm looking forward to the next.
The only complaint I have is that the accents and pronunciations are typically American. Most of the main characters are English, why wasn't the narration performed by an English actor, it would have made much more sense.