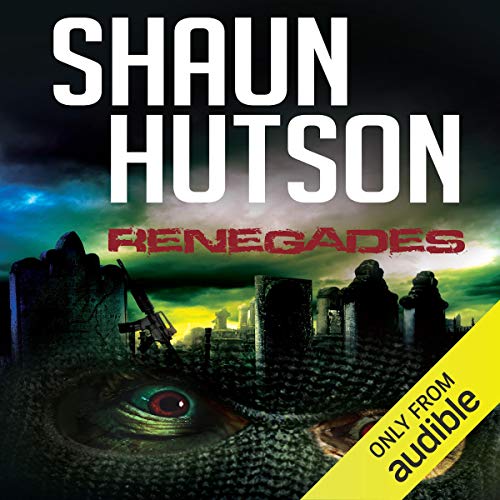 "Britain's greatest living horror author." (Dark Side)
"An expert in the art of keeping the reader turning the pages." (Time Out)
"Hutson writes grippingly." (SFX Magazine)
"Hutson’s writing is scintillating. His intense descriptions of realistic violence and characters take you to the very heart of the action in Dublin and France… Renegades is a novel so gritty, it’ll make your gums bleed." (This is Horror)

As a member of the Counter Terrorist Unit, Sean Doyle thought he'd seen it all. Every violent act, every depraved action man could perpetrate against man but he is to discover that there are much worse things in this world than even he has encountered.

Tracking a group of renegade terrorists from London to the Republic of Ireland, Doyle and his partner must discover who is funding these men and why. What he discovers is beyond even his experience and threatens not just his life but his sanity too.

The trail of terror leads not just across Britain but to France as well where the monstrous deeds of a murderer who died four hundred years earlier still cast a dark and horrific shadow. In the grisly frames of a stained glass window taken from the home of this vile killer lay the secret sought by so many for so long. The secret of immortality. And one man will stop at nothing to get it.

Sean Doyle is about to meet that man. Modern terrorism meets Medieval madness in a jaw-dropping climax that will make the living envy the dead...

Shaun Hutson is one of the UK's best known horror writers and author of over 50 books. He made his name with best-sellers such as Spawn and Relics - acquiring the nicknames 'The Godfather of Gore' and 'The Shakespeare of Gore' in the process - and has since written a number of dark urban thrillers as well. He has also written for radio, magazines, television and novelized a couple of Hammer Horror films.

This was one of the few books that I have just given up on. The action is so over the top and exaggerated as to be comedic, yet the descriptions of the sex and violence are so disturbingly graphic as to ruin any mote of comedy. The charterers are deplorable and, at least over the first hour or two, feel very two dimensional and predictable. The book feels like it was assembled from a grab bag of tropes. The reader was fine, but I wouldn't recommend this book based solely on his performance.

Shaun Hutson's 1993 political thriller is finally given the audiobook treatment and listening to this is akin to going back twenty years to a dark time in Ireland's history.

Counter terrorist officer Sean Doyle is on the tale of IRA members following the massacre's at Stormont & Windsor Park with the help of fellow officer Georgie Willis. The story is typical Hutson (plenty of violence, high body count & a couple of sex scenes) and flows nicely, Kobna Holdbrook-Smith is excellent accent wise and does a good job with the characters (especially Doyle).

All in all a very good political thriller from an author more well known for his horror stories...

only chose this for the narrator which was a mistake. even a great narrator can't save a dire book.

I bought this as I've enjoyed Kobna H-S's performances narrating the Peter Grant book by Ben Aaronovitch. I thought the plot idea sounded interesting so was expecting a good "read".
The plot is basic and is heavy on graphic sex and violence to the point it reminded me of the early James Herbert books such as The Rats, Lair etc which I loved as a teen but have grown out if over the years.
If you want an easy read reminiscent of a low budget 80's horror movie then buy this book, if you prefer your book to have a bit more depth, then give it a miss.

A rather silly gore fest

I really ought to look at the synopsis before buying. This book will appeal to anybody who needs non stop killing and mutilation to float their boat. I will certainly not read anything more from this author and will stick to books with a decent plot and characters with a degree of credibility.

Narrator was pretty decent, the story was uninteresting. which suddenly turns in the end weirdly. won't be reading the follow ups.

I read this book when it first came out and loved it. As I did a lot of Shaun Hutson books. So thought I’d give it a go on here.
I’m sorry to say this but the narrator absolutely kills this book ! Makes the hole story flat. I wouldn’t be able to listen to another book with this guy reading it.

I really struggled with this story, i found the IRA storyline boring. great ending though!

Would you try another book written by Shaun Hutson or narrated by Kobna Holdbrook-Smith?

No, the style of both does nothing for me

I found doesn't the intonation wrong, but the material was rubbish anyway

I enjoyed the plot of this book, it was very well read, however I was not so keen some of the sexually explicit areas of the story

Not an author I am familiar with, bought it on the daily deal which is a good way of trying out new genres.
story was very good with well written characters, violent with a twist.
I would recommend this book, the reader was excellent.