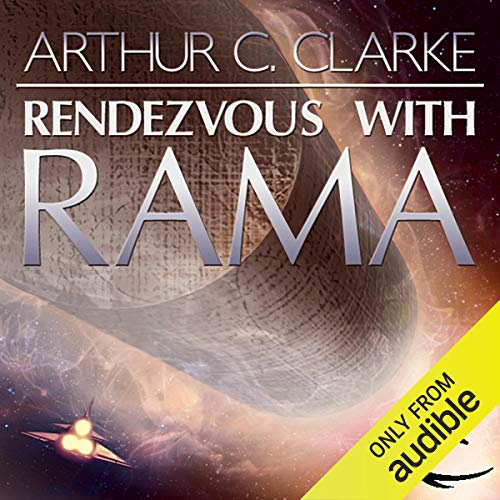 At first, only a few things are known about the celestial object that astronomers dub Rama. It is huge, weighing more than ten trillion tons. And it is hurtling through the solar system at inconceivable speed. Then a space probe confirms the unthinkable: Rama is no natural object. It is, incredibly, an interstellar spacecraft.

Space explorers and planet-bound scientists alike prepare for mankind's first encounter with alien intelligence. It will kindle their wildest dreams...and fan their darkest fears. For no one knows who the Ramans are or why they have come. And now the moment of rendezvous awaits - just behind a Raman airlock door.

BONUS AUDIO: Includes an exclusive introduction by Hugo Award-winning author Robert J. Sawyer, who explains why Rendezvous with Rama will make the listener "feel both humbled and exhilarated at the same time".

It's clear why "Rendezvous With Rama" reeived so many awards and is regarded as a classic. Fantastic and unique story line! However, the narration on this version is delivered in such a monotone that the listener becomes easily disengaged. It actually sounds robotic. Would love to hear it narrated by a human.

Disappointed in the narrator

I've loved this book for over 30 years. But to tell the truth, for a while, I had almost convinced myself that the "reader" was artificial. The HAL9000 conveys more warmth and expression than the reader of this book. I've found it very distracting and I'm not sure I can finish.

Story is great and well written. The narrator turns it into a travesty. Every character is read with the same monotone voice with no inflection and one of the worst cadences I've ever listened to outside of a college calculus class. It sounds a little better if you speed it up to 1.25x, but it's still horrible. Would even be willing to re-purchase this with a better narrator - Seriously, he's that bad.

With all the charm and nuanced diction of a first-gen GPS-machine, the narrator absolutely slaughters this fine book. I will try to render in text an example of what I mean:

"Commander Norton. Remembered. Those fiRSt, TV transmissions. Which? He had replayed... So Many Times..... During the final minutes...... Of The Rendezvous. But there was one thing. No, Electronic, Image, could POHSSSibly convey. And that. Was Rama's. OverwHelming. Size."

I had to give up after 4 chapters, as I was risking the lives of my fellow motorists by listening to this snooze-inducing monotone. It was like listening to a GPS voice synthesizer trying to render Shakespeare.

If you could sum up Rendezvous with Rama in three words, what would they be?

My only objection to this product. The naration was completely monotone and droll. Different accents were well utlised for the characters, but the naration was simply not worth of the novel.

I read this book back in the late 1970's - it has become a deserved classic. It was wonderful to revisit this book but I found the narration annoying. Listen to the sample before you spend your credit, if you can cope with the narration then download this book. You won't regret it.

It's set on the 22nd century and starts when astronomers detect an object near Jupiter.

They believe it to be an asteroid and name it after a Hindu God named "Rama". Upon investigation they discover that the orbit is not consistent with a solar orbit and send an unmanned probe to investigate - whilst broadcasting pictures back they learn that its a reflective cylinder 16km x 50km..

An survey spaceship is thus sent out to investigate..

This is a very detail oriented book - with the usual "forecasting" as Clarke does best.

This series comprises of:

What disappointed you about Rendezvous with Rama?

Microsoft Sam's robotic voice could have read this just as well as the narrator did. It was painful to listen. I ended up listening at 1.5 speed and that helped make it manageable. He read roboticly and very slowly. Also, I prefer a much more character and story drive book. I've come to understand that really hard science fiction is not my preference.

Has Rendezvous with Rama turned you off from other books in this genre?

I am less likely to try really science centered hard sci-fi in the future.

Would you be willing to try another one of Peter Ganim and Robert J. Sawyer (Introduction) ’s performances?

The idea was very interesting, but ultimately left me bored.

TO SAIL THE CYLINDRICAL SEA

Simps, Biots,holograms, spaceguard,aerobatic flyer,a tenth planet, women in space, marriage contracts, a man with a wife on two different planets, a woman with two husbands, generation ships, etc... You may say you have heard it all before, but with the exception of marriage contracts (Robert Heinlein) you heard it here first. Clarke writes in a conservative matter, but he has sees the future better then anyone. I've mentioned it before, but when Clarke writes, it is like you are there or your watching it on the news. His writing is not as sensational as some of today's writing, but his writing is more realistic. The whole idea of a spaceship like this was amazing to begin with, but if it was to happen, my money is Clarke will have pictured it more accurately then anybody else. You can not consider yourself knowledgeable in Science fiction literature if you have not read this book. This is my third time to read or listen to it. Maybe I am a Raman, they do everything in three's.

The narrator does suck, but the story still comes through, due to strong writing. I suggest you read the book and listen to the book and then do one of them once more, be a Raman.

WHEN IN DOUBT, SAY NOTHING AND MOVE ON.

Wow, I've never read this story before and it was the first time I've finished a long story of Clarke's. What great stuff!

Yes, the narrator is rather dry and has a tempo that can be boring on a long drive but it worked well enough.

This is one of my favourite books and it tells a mind blowing story but unfortunately the reader is very bland and for me this is a very important part of an audiobook!

After reading all the great reviews and see all the awards it got. I was really looking forward to listening to this audio book. However after aprox 5 hours, I just had to stop.
It was boring. This confused me. I've since come to the conclusion, that the narrator's dull tone, is what made me switch off. Shame really as like I said, I was really looking forward to listening

Don't get me wrong, the book is superb. Typically Clarke, more interested in the wonder of discovery than in deep and rounded characters, the book is nevertheless compelling and convincingly realistic.

The narration however, leaves much to be desired. From a main character who can't decide between the Queen's English, the strains of the South Pacific, or Cockney, to general narration that is so staccato and uninflected that it could be voiced by Microsoft Narrator, this is quite possibly one of the single worst readings of a book I have ever come across.

This is a great story, probably Arthur C Clarke's best. What a shame Peter Gamin (the reader) has such a boring voice and condecending delivery.

For people who love the imagery that a really well written Sci-Fi book can conjure, this is the book for you. A great adventure-in-space story. The only downside is the absence of any real character development or any human story - the characters are there merely as observers of what the author wants to show the reader/listener and to enact any action that needs to be executed to move the story on. We know very little of the people in the story, which may suit some listeners but I could have done with a little more to cement the story together.

Still a beautifully written and well narrated story which I highly recommend.

When this book was recommended I did not think the plot could be very interesting. However the reason I rated it so high was how despite the lack of a obvious antagonist. I was on the edge of my sofa the whole time. I was interested in the characters and the world described.

If your interested in the science fiction and humanities potential first steps out of our system give this book a try.

One of the best Sci Fi books written - seriously!

Where does Rendezvous with Rama rank among all the audiobooks you’ve listened to so far?

The imagination displayed in this book is mind blowing. When you think that it was written in 1973! Man was still walking and driving on the moon at that time.
He extrapolates a future, populates it, designs a whole world in a spaceship that is the size of Greater London and then lets you explore it.
So his characterisation is not as strong as you might like. But the scope he gives you to think about what he is describing is fantastic.
There are two great books about the first contact with aliens.
This one and Larry Niven's 'Mote in God's Eye'. I can never decide which is better.

"Clarke invented the space study program which detects Rama, Project Spaceguard, as a method of identifying near-Earth objects on Earth-impact trajectories; in the novel it was initiated after an asteroid struck Italy on 11 September 2077, destroying Padua and Verona and sinking Venice.
A real project named Spaceguard was initiated in 1992, named after Clarke's fictional project. After interest in the dangers of asteroid strikes was heightened by a series of Hollywood disaster films, the United States Congress gave NASA authorisation and funding to support Spaceguard."

This man helped to make things happen by telling the world what they would look like.

Expand your mind and listen to this book.

Just wanted to say that I was nearly put off puchasing this audio-book because of the bad reviews of the narration of Peter Ganim. Well I have to say I'm glad I did (purchase), because I realy enjoyed it. Well done Peter Ganim !
Oh and by the way, the story is absolutly top class. Five stars allround.

One of the best SyFy books ever written, spoiled with amazing BAD narrator, with all do respect :)
...please get your self anything else but this book, don't waste your money or credit.
Very badly disappointed :(

Whilst of its time this is one of Clarks more fully formed and fleshed out worlds with characters that connect with the story rather than just inhabit a space within a wider plot.