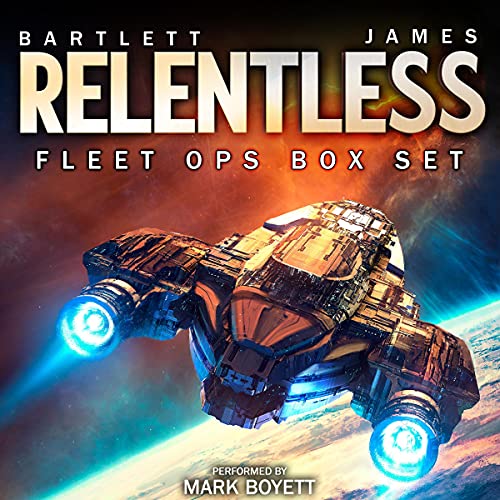 The best-selling military space opera: the complete series in one box set. We fought them for decades. And we won.

But victory has proven more destructive than defeat.

Years after defeating aliens bent on burning down the galaxy, the Interstellar Union is breaking apart, its member species undermining each other at every opportunity.

When an interdimensional distress signal arrives, only humanity is interested in helping.

Captain Vin Husher is given command of the UHS Relentless, and sent in as part of a carrier strike group...

...right into a trap laid by humanity’s old enemy.

Surrounded by a bioengineered super-species and unable to return home, Husher must draw on decades of experience just to keep his people alive.

If he can’t survive long enough to escape this hellish pocket universe and warn humanity of the impending danger, all will be lost.

I feel like the ending was kinda rushed. they setup the big bad guy then...I won't spoil it. I just find the overall story a lil forced. all they had to do is send a small scout machine in the first book. there and try to bring it back and this story never happens. it's kinda strange. oh well still enjoyed it.

Not As Good As The First 3 Series

This was the fourth series set in the Ixan Universe.
Spoiler Alert!
I thoroughly enjoyed the first three series. The story, characters and narration was wonderful. I was so excited to find the fourth series came out and immediately started it. I love the continuing story of these characters, but had a hard time keeping focused on this story. The plot line wasn't bad, but things started to seem a bit cheesy (calling some of the enemy ships "stomach ships", I had a hard time stomaching). I also found it cheezy that when the Relentless was lost, they take an alien spaceship and name it Relentless (nothing like the original).
With the entire Ixan Universe the first three series handled progressing the story nicely. This fourth installment seemed to be grasping in trying to come up with badder bad guys.
I finished this series, but would have to carefully consider if I would read more of these stories, if more are to come. I also question if the addition of Joshua James's involvement with the Relentless Box Set is what threw off the pace of the previous three series.

If you love Mechs and Military you love the science fiction story. The narrator was very good.

it's building up to another epic battle again. not much else seemed to happen in this one

One Of My Favorite Sci-Fi Writers

I am a huge fan of Scott's work and have read much of his other material too. This is sci-fi which brings an intelligent edge to politics and feels like a boys' own adventure too. If you want an incredible story and value for money for a single credit, this should be your top pick this month.

Love the story and narration. It’s full of action space battles with an overall story that all three books are leading towards

As a box set well worth it

I enjoyed the set. Was very heavy in military speak which can be boring. Still enjoyed the story. Very easy to listen to as the performance was very well done.