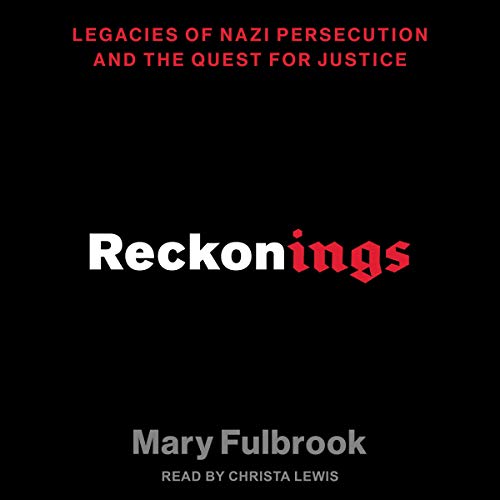 Mary Fulbrook's encompassing book explores the lives of individuals across a full spectrum of suffering and guilt, each one capturing one small part of the greater story. Using "reckoning" in the widest possible sense to evoke how the consequences of violence have expanded almost infinitely through time. Fulbrook exposes the disjuncture between official myths about "dealing with the past" and the extent to which the vast majority of Nazi perpetrators evaded responsibility.

In the successor states to the Third Reich - East Germany, West Germany, and Austria - prosecution varied widely. Communist East Germany pursued Nazi criminals and handed down severe sentences; West Germany, caught between facing up to the past and seeking to draw a line under it, tended toward selective justice and reintegration of former Nazis; and Austria made nearly no reckoning at all until the mid-1980s, when news broke about Austrian presidential candidate Kurt Waldheim's past. The continuing battle with the legacies of Nazism in the private sphere was often at odds with public remembrance and memorials.

This is an extraordinary book that seeks to “understand not only what happened during the Nazi era and its immediate impact but also the ways in which this past has continued to be of significance among members of subsequent generations” of victims and perpetrators of the Holocaust. In contrast to a multiple of recent books about the Nazi concentration and labor camps, Fulbrook concentrates on individual survivors and perpetrators. Intelligently written, it is emotive and profound. Christa Lewis does an outstanding job narrating.

An excellent, well:researched book. Very comprehensive without overloading information, and broken in to logical and interconnected narrative sections.
A perfect narrator for the book, with accurate multilingual pronunciations.
By far the best text I've found regarding the Holocaust, in its widest sense.