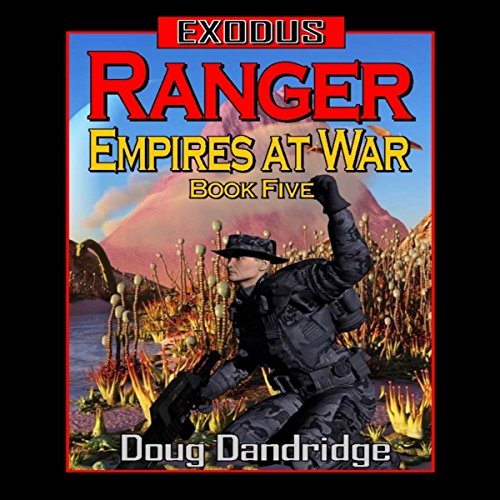 No one is safe during a war of extermination. Especially the civilians.

Rebecca Goldman was a bright and pretty child, a 12 year old with a loving family. Technology allowed them to live comfortably on the most dangerous planet in the Empire, Azure. And then the Ca'cadasans came, and it was suddenly survival of the fittest out in the wilderness. Losing everything, Rebecca has only herself to depend on in a jungle where everything is an enemy.

Cornelius Walborski just wanted to killed Cacas. After losing his wife to the aliens on Sestius, he trains to become a Ranger, the augmented warriors of the Imperial Army. He has never seen anything like Azure, but there are Cacas to hunt, and a mission to perform.

Two unlikely survivors find themselves thrust together, where the man will save the child, and save himself at the same time.

The Heir to Heinlein!

I was so excited to see this book out on audible. I carries the story forward on a new planet with both characters we know and love and new ones in the mix. The war continues as we follow training of recruit through basic, NCO school, and Ranger Training. Then off to a planetary mission. I lost sleep following along in the dangerous jungles as we fight the ancient foe.

Good but not the main storyline

If you could sum up Ranger in three words, what would they be?

This book is a bit like a MMO sidequest. Fun and interesting but not pushing the story forward (that much). Book 1-4 has much more happening at once. You have 4-5 storys told parallel but in this book it's focus just on one world and two ppl. It's not bad! It's not what I expected but still I had alot of fun!

I really love this series! Im extremely disappointed that audible doesnt have the whole series available yet.

Good Side Story for the series

the main character was pretty good though I could have done without the kid in the story. his later books get much better since I prefer the space War.

Loved the entire series.
I would buy the entire series if available and I know I'm not alone in this consensus. This is a great series that needs a conclusion.
Does mankind survive this?
What becomes to the political structure?
So many angles of adversity that mankind is facing and then... stop?
I have brought so many interest listeners to audible on the strength of this story. We need more!
I wish I could rate this series higher

Let me start by saying that I love this series, I've read all of the books out so far at least once. I started listening to these because I'm starting a new read though and all the books up to this point had a few things that bothered me, but what audio book dosen't? I'm not a huge fan of the narrator but he does well enough. However, this book had at least 6 or 7 instances where the narrator made a mistake taking the line and then read it correctly, that's to be expected. But what isn't okay, is that these were not edited out. The proofing and editing of this recording is definitely substandard. Despite these issues, I would still recommend listening to this book.

The bar has been lowered!

I enjoyed the previous books in the series but this installment had no real "meat" to the story. Any book that spends so much of the story building to a climax must have a "pay off" to make the journey worthwhile. The pay off in Ranger (for me) was too little too late.

Would you be willing to try another book from Doug Dandridge? Why or why not?

I'm hoping that Ranger was a bit of a miss-step for Dandridge. I'm actually looking forward to a story with a grown up Rebecca kicking some alien butt.

For the next book in the series...more "meat" and less "potato".

Different but still a great listen

I'm a huge fan of the series. Really enjoyed this book, even though it takes a change of scene from what went before.