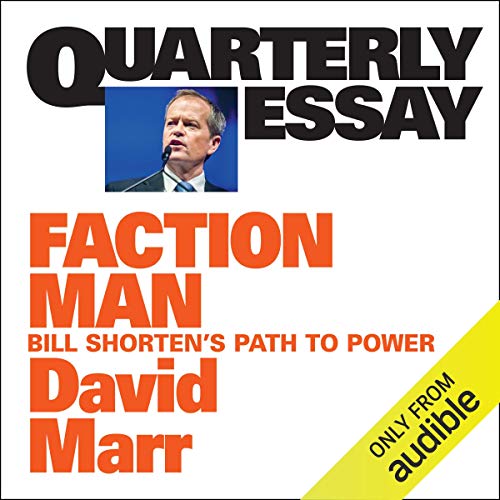 Bill Shorten is the man who would be our next prime minister. David Marr is the nation's leading writer of political biography. Marr's Quarterly Essay profiles of Kevin Rudd and Tony Abbott ignited firestorms of media coverage and were national best sellers.

In Quarterly Essay 59, he turns his enquiring mind toward Bill Shorten. This controversial and brilliant new essay looks at the making of Shorten. It also addresses a key question: how does the union movement for good or ill continue to shape the Labor Party?

David Marr is the multiaward-winning author of Patrick White: A Life, Panic and The High Price of Heaven and coauthor with Marian Wilkinson of Dark Victory. He has written for the Sydney Morning Herald, The Age and The Monthly, been editor of the National Times, a reporter for Four Corners and presenter of ABC TV’s Media Watch.

He is also the author of two previous best-selling biographical Quarterly Essays: 'Power Trip: The Political Journey of Kevin Rudd' and 'Political Animal: The Making of Tony Abbott'.