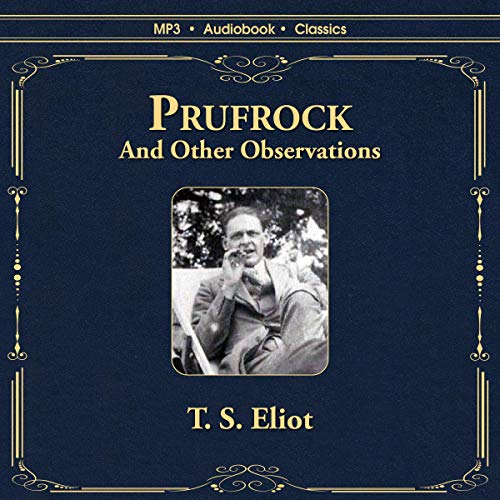 Prufrock and Other Observations is the title of a pamphlet of 12 poems by T.S. Eliot published in 1917 by The Egoist, a small publishing firm run by Dora Marsden, an English suffragette and philosopher of language.

Most of the poems had been published earlier in literary magazines, most notably "The Love Song of J. Alfred Prufrock", which was Eliot's first published poem and appeared in the June 1915 issue of Poetry: A Magazine of Modern Verse at the urging of Ezra Pound, overseas editor for the magazine.

"Prufrock" is a dramatic interior monologue of a modern urban man trapped in an inertia of isolation and indecision that has been described as a "drama of literary anguish". The poem was influenced by The Divine Comedy and is peppered with references to the Bible, Shakespeare plays, and the works of metaphysical poet Andrew Marvell and the French symbolist poets.

It was considered outlandish when it first appeared. One anonymous London reviewer commented that "The fact that these things occurred to the mind of Mr. Eliot is surely of the very smallest importance to anyone, even to himself. They certainly have no relation to poetry." As it happens, "Prufrock" and the companion poems in this volume helped effect a paradigm shift away from Romanticism and Georgian lyrics to what came to be called Modernism and introduced one of the most distinctive voices and recognized voices in modern literature.