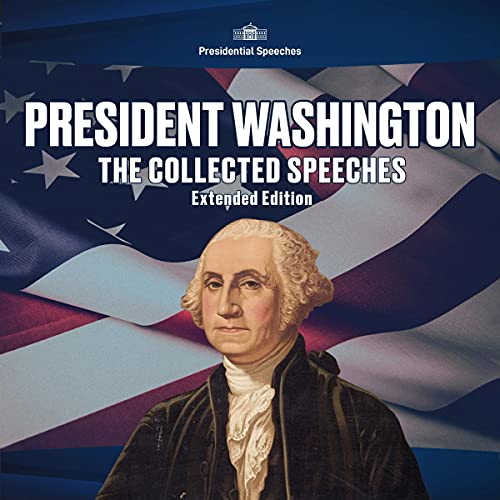 This collection contains authentic re-enactments of all of George Washington's (1732-1799) major speeches during his two presidential term of office as America's first president after victory in the War for Independence. It includes his farewell address in full, regarded as a fine example of his political beliefs, as well as eight annual messages to Congress and two inaugural addresses.

Speeches on major policy events are also included, such as Washington's declaration during the early stages of the French Revolutionary Wars in 1793 and multiple statements relating to the Cherokee and Seneca nations. The speeches also discuss other significant topics, including Congressional redistricting, militia service, and include a Thanksgiving proclamation. This authentic reenactment of George Washington's speeches by skilled narrator David Roberts brings Washington's words to life more than two centuries after they were first spoken. This collection includes 20 examples of Washington's famous oratory spanning 1789 to 1796.

George Washington was a military general, a statesman, and Founding Father. This collection showcases his pivotal role as the first American president and shows why many consider him the Father of his country and among the greatest of presidents, shaping many beliefs and traditions that remain to this day.