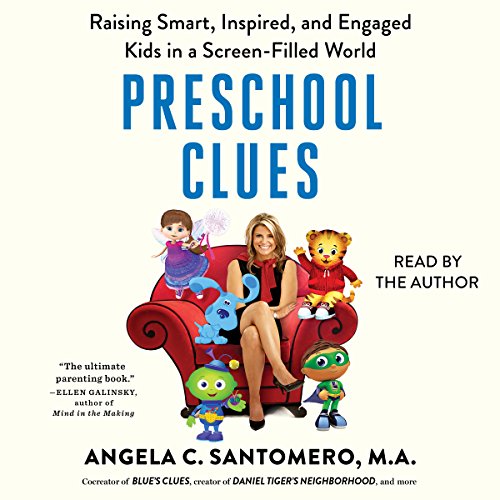 The award-winning creator of Blue’s Clues, Super Why!, and Daniel Tiger’s Neighborhood shares the secret sauce behind her shows’ powerful, transformative results in the form of 11 research-based, foundational “clues” to ensure that preschoolers flourish academically, socially, and emotionally during this critical time.

The preschool years - when children are between the ages of two and five - are the most influential, important years in a child’s life. Studies show that pausing to interact, playing to solve problems, diffusing with humor, and using repetition are the hidden clues conscious parents use to raise successful kids and help them learn critical thinking skills, foster empathy, and nurture their sense of self-worth.

Angela C. Santomero, MA, the award-winning creator of children’s television phenomena, knows this better than anyone and has spent decades working to instill confidence in her young viewers. In Preschool Clues, she breaks down the philosophy behind her shows - educating, inspiring, and empowering kids - into concrete strategies that parents and educators can incorporate into their family and classroom to set their preschoolers up for success, such as:

In Preschool Clues, Angela shares the latest research from top thinkers in child development and education. Through her practical, straightforward advice and inspiring, conversational approach, you will not only understand exactly what your children are learning from the shows they watch and why these shows are so effective; you’ll know exactly how to apply these same proven approaches in your daily life and with the same powerful results.

As a new preschool teacher this audiobook was very insightful and eye-opening. It has a lot of great tips that I will utilize in class and also it being read by the author is always a good treat.

I loved hearing about Angela’s experiences as a mom, show creator, and children’s expert. This book is extremely informative, and makes me excited to be a parent one day. I have been recommending this book to every mom with a preschooler that I know!

I love Mr. Rogers and his influence on Angela’s work. This book was a great read and I am a better parent for it.