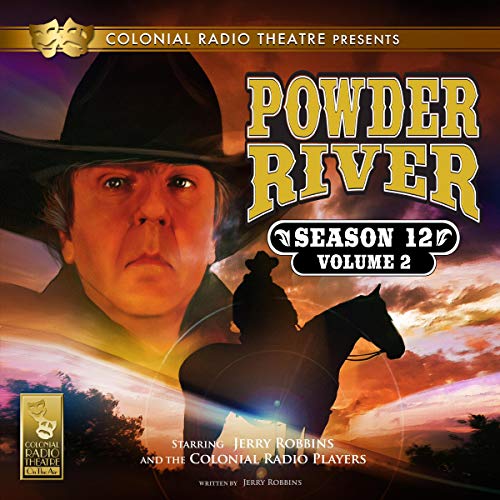 In Season 12, Vol. 2, big changes come to Clearmont as Millie sells her beloved hotel to none other than Octavia Hudson, while Esther shocks the ladies and upsets the men as she becomes the new owner of the saloon, and quickly finds trouble when she hires a famous French singer to give a concert on the Golden Nugget stage. Meanwhile, Britt must try to keep Andrew Hudson from the gallows in Boston, while Dawes is faced with the loss of Cheyenne, who decides to leave Clearmont.

A happy day of marriage is soon followed by a sad day of loss, as the town once again needs to look towards the sunrise and the days ahead.

Six exciting adventures await you along the banks of the mighty Powder River in Season 12, Vol. 2, of CRT's long running western.

Written and directed by Jerry Robbins.

The voices, characters, and stories are the best. Always good to go to POWDER RIVER.

I have been listening from season 1 and can't wait till the next comes out. The cast is great. Thank you Jerry Robbins

I҉ L҉O҉V҉E҉ P҉O҉W҉D҉E҉R҉ R҉I҉V҉E҉R҉
I listen to powder river almost every day!
I’ve listen to all of them like 100 times and still haven’t got tired of it! (no joke)
I recommend these stories to everyone there amazing!!!!! So buy them!!! You will love them!!!! And there amazing for a long or short road trip! Hurry and buy them!!!
💗💗💗💗💗💗💗💗💗💗💗

It might of been me ,but it was boring to me,it wasn't what I expected.

Jerry Robbins and the cast are amazing! A must own. Can't wait for season 13!

Not your typical western

What a great series! It just gets better and better, but start at the beginning.

Story line was not what I was expecting. But overall it was very good! Looking forward to season 13! Thank you!

Laugh, Cried, And Loved it!

Western Radio Drama has a long, complex and exciting history. Powder River's latest installment is a wonderful addition in the Audible era. Tension, suspense, laughter and tears await the listener. I purchased this at 3:30 Am and enjoyed every missing minute of sleep. The series is terrific and my favorite on Audible.

This segment of Powder River was up to Mr. Robbins’ excellent standards. I was sad to see Cheyenne and Millie leaving the show, but I understand why they did. I am really hopeful that in later stories that McMasters and Esther will finally tie the knot. Robbins and the rest of the Colonial Radio Theater performers do so well that I feel like I’m part of the Claremont family.

So many laughs tears and shocks! Totally in love with this series! It’s a must buy