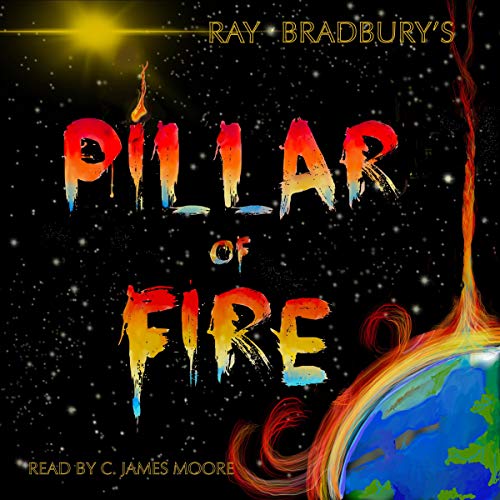 "Pillar of Fire", a great Ray Bradbury short story, is one of those horror tales that is guaranteed to raise goosebumps at every step of the bizarre way...from the graveyard to, well, a golden box launched into forever.

Follow William Lantry, born in 1898, died in 1933, and raised again in 2349 by the forces of hate seething within him for centuries.  He is the last living dead man on Earth, an Earth that no longer tolerates corpses, the Earth where the dead are placed in golden boxes and disposed of within minutes. For Lantry, determined to find (or create) a friend or follower to join him in his death-life, the goal of tearing down society's tools of body incineration becomes his mission.

A strange tale indeed from the master of science fiction tinged with unsettling horror, "Pillar of Fire" ranks as one of Bradbury's finest short stories.

Masterful narration of a chilling story

I listened to this story twice, it was that well-told! It starts with the utterly chilling spectre of a corpse returning to the world, hundreds of years in the future, wreaking havoc. I won’t give away the end, but, oh my!, it is classic Bradbury.
Narrator C. James Moore perfectly captures the main character’s confusion and rage at finding himself once again among the living. I could feel the cold detachment of not caring if others live or die, and the despair when he realizes he is alone in the world.
I wish this short story was longer! Well worth the credit, and I hope Moore narrates more of Bradbury’s work.