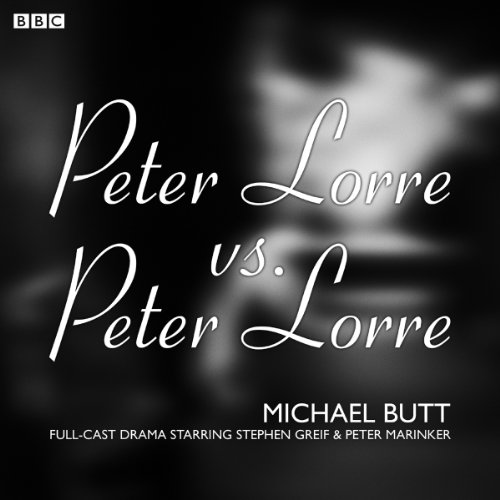 A BBC Radio 4 full-cast dramatisation of the strange legal case of film star Peter Lorre, written and produced by Michael Butt and starring Stephen Greif. Originally broadcast as the ‘Afternoon Play’ on 10 May 2010.

Towards the end of his unique career, movie star Peter Lorre found himself at the centre of an unusual legal case. Incorporating verbatim extracts from the court transcripts, Michael Butt's play wonders what was going through Lorre's troubled mind as he fought to protect his name and identity.

This was a a wonderful audio drama about a little know case later in the actor’s life regarding someone else who wanted to use his name. Great cast and great productions.

My father was Curtis Gemmil, one of the lawyers portrayed In this play. That was the reason that I decided to download and listen to it. Having heard the story of this lawsuit from the other side, it was fascinating to hear about what was happening with Peter Lorre during the trial. I wish my father was still alive so he could have heard of this play. I think he would’ve gotten a kick out of it. My father was a very young lawyer when this case was tried, and he went on to have a very successful career in Los Angeles.

Based on a true life legal trial this is a story I vaguely knew about but wanted to hear a dramatisation of. The story touches on themes of Hollywood and the corruption of identity. It tells you as much about Peter Lorre as the bizarre trial itself. Recommended

Intriguing insight into the life and mind of "Weird eyed" horror actor Peter Lorre who objects to another artist sharing his name.