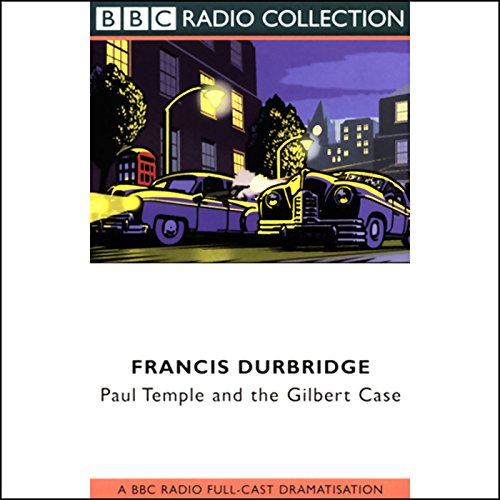 From 1938 to 1969 crime novelist and detective Paul Temple and his Fleet Street journalist wife Steve solved case after case in one of BBC radio's most popular serials. They inhabit a sophisticated, well-dressed world of chilled cocktails and fast cars, where the women are chic and the men still wear cravats. And where Sir Graham Forbes of Scotland Yard always needs Paul's help with a tricky case.

Just as Paul and Steve are about to go on holiday, Wilfrid Stirling visits with a plea. His daughter Brenda was recently murdered, her body dumped on a bomb site. Her boyfriend Howard Gilbert, seen walking away from the site, has been convicted of the murder and sentenced to hang, but Brenda's father feels sure he didn't do it. In spite of all the evidence against Gilbert, Mr Stirling asks Paul to clear his name and discover the real murderer.

If he's to prevent an unjust hanging, Paul has just a week in which to discover the truth. Can he solve the case in time?

The sooner Audible makes all the Paul Temple audiobooks available the better! Well written, suspenseful and a well caried out dramatization makes it a pleasure to listen to these stories

An even more implausible plot than usual

In the past couple of months I've gotten really into the Paul Temple dramatizations and I think I've bought all the ones available on Audible. And I have to say that this one was just fine until the 'denouement', which kind of spoiled it for me.

I know you have to take all the Paul Temple stories with a grain of salt: They all have these convoluted plots, mostly involving drugs and blackmail, Paul and Steve almost getting killed about 8 million times per series, and no forensic evidence. And that's okay, because the characters and acting is so good, especially with Peter Coke and Marjorie Westbury as Paul and Steve.

However, the plot resolution of this one is just SO unbelievable (I don't want to say too much and give it away, but believe me when I tell you you're going to roll your eyes) that it kind of spoiled it for me in the end.

It's worth buying if you've listened to a Paul Temple show before and like the series, but if you haven't, you're better off starting with The Spencer Affair or The Conrad Case.

These stories are the antidote to modern day stresses. The past is like a foreign country and these certainly feel from another time and place. Full of cliches, yet surprisingly enjoyable. Women have "pasts", posh people are super posh, and everyone else is the 'salt of the earth' or a villan. By Tiimothy they are good!!

"By Timothy a Classic Paul Temple!

Our family was first introduced to Paul Temple with a BBC radio version one Christmas. We have listened as a family from when our children were quite young. As expected releiving many a tedious car journey (we once waited outside or holiday cottage to hear the last 20 minutes) and surprisingly often preferred to TV. If you like a 'ripping yarn' look no further, "By Timothy"

These shows have it all. Good old radio shows at their best & Peter Coke & Marjorie Westbury are perfect, believable & such fun.

If you like detectives stories you will enjoy these. I have them all, these are just right to listen to on winter days when it is cold outside & you just want to curl up all snug & warm & be entertained without the ugliness of vulgar & in your face violence.

Follow Paul & his wife Stevie as they are sent on yet another great journey of espionage, murder, theft, you name it they get involved with it. We are thrown into the world of the glamorous late 1950' to early 1960's era of cocktail parties, butlers & big money.

There is cosines about these shows I do not find anywhere else, you feel comfortable in the knowledge that dear old Paul will crack the job & no matter what horrific situation we are drawn into, Paul & Stevie will be there with their clean upperclass dignity & morals to take the challenge & win.

Another solid book from Paul Temple

Would you listen to Paul Temple and the Gilbert Case (Dramatised) again? Why?

Yes, the story was complex enough to keep it interesting, and the dramatisation great.

What other book might you compare Paul Temple and the Gilbert Case (Dramatised) to, and why?

The actors were great (although Steve was played by a different actress (or at least sounded different) which took a bit of getting used to.

Just when you thought it was safe to go back to the drawing room ...!

Excellent plot and characterisation by this consummate writer of murder mysteries. This original BBC recording fairly steams along with numerous twists and turns and a wonderful cliffhanger at the end of each 27 minute episode.This is a really good piece to listen to, but make sure you have taken your blood pressure medication!