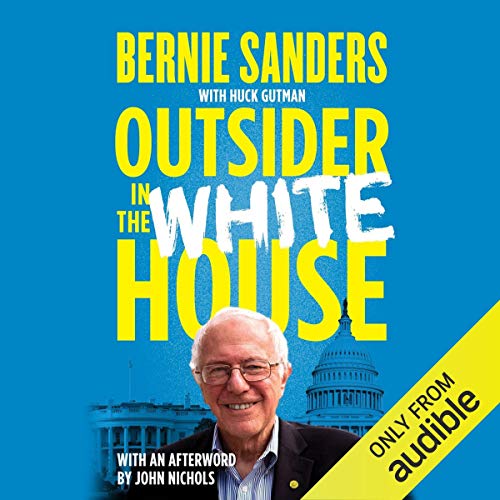 Bernie Sanders' campaign for the presidency of the United States has galvanized supporters all over the country, drawing attention to issues of economic, racial, and social justice and spotlighting one of the most interesting and unconventional candidates in decades.

In a special afterword, Nation editor John Nichols assesses Sanders’ Senate career and describes how it led to a presidential campaign that is changing the American discussion of politics and the presidency.

Sanders tells the story of a passionate and principled political life as well as his blueprint for the nation that works for everyone. He describes cutting his teeth in the Civil Rights Movement, building a grassroots political movement, and becoming the first independent elected to the US Congress in 40 years.

The story continues into the US Senate and through the dramatic launch of his presidential campaign.

Outsider in the White Houseに寄せられたリスナーの声

Vital listening for all people.

Bernie is a man of the people, for the people. I've never supported a politician more. And it's not because he's a progressive and I'm very liberal, it's because he's for middle class families and working people. Bernie is not some sort of radical, he's a modern day FDR. He believes in a form of social justice that we might all agree on if we cast aside labels and personal biases. We're all in this together. This, being life, together, as in all of us, the whole world. Let's try to make it a better place for our children.

Behind the Scenes with Bernie--- WORTH it!

I’ve listened to every candidate’s memoir there is--- am I a glutton or a masochist? No, it was fun, because I was the executive producer on this title, Bernie’s memoir. I’d love to tell you a bit behind the scenes.

Bernie wrote his “first” draft of this title when he first won his Senator’s seat in Vermont.He’s been calling out the corruption of the 1% since Day One, it’s remarkable.--The opposite of flim-flamming! The whole time you listen, wondering, “How can anyone this principled make it in politics? You have an answer by the end.

For this new edition, everyone involved: Bernie, his editors at Verso, myself, his wife and staff, John Nichols from "The Nation"-- we all wanted it to directly address the presidential campaign and What The Hell Happens Now.

I can’t believe how “Youuuuhuge" the campaign got from the time we started! We thought Bernie would have plenty of time to narrate his book... OMG, he took off like a rocket.

Thank goodness, we had a fan and uber-talented actor in Joe Barrett, who was thrilled to take on the role. I know, we’d all love to hear Larry David’s stand-up satire, but I don’t think David could keep it real for the gravitas. And there are indeed heavy moments. Sanders makes a compelling case, of a different playing field, of putting people first. --Of what it’s like to hang in there when it seems like you’ve been pushed down beyond repair.

If you’re looking for a little Bernie-reality-check and you can’t make it to the next /rally— if you want to know the man behind the campaign miracle— this is it.

To get ready for our recording, I listened every other Presidential and Candidate memoir out there. It’s so funny to hear them all, I think I should win a baroque prize.

To give you an idea of what I thought was good listening: Obama’s memoir is the best “writing;” he could be a novelist or a poet. Bill Clinton’s “My Life” is also a page-turner. The others... suffer on the SNORE-spectrum. Biography-wise, Caro’s book on Johnson is excellent. In any case, no matter what the candidate, it’s fascinating to hear them speak on their childhood, background, ideas. Even George Bush! If you’re voting for one of them... or campaigning against them... do dive in!

As a huge Bernie fan, I was really looking forward to this book, but was disappointed at best. Although many of the stories are interesting and informative, it is very unorganized, scattered, and hard to follow. It jumps back and forth in time and campaigns, and just doesn’t make sense. At one point, after discussing his final term (and even final meeting) as mayor, then jumping to a national race, the book returns to the campaign and election of his final term as mayor. As much as I like Bernie, I finally had tin stop listening.

Bernie Sanders is truly the greatest American hero of our time. Whether history will reflect that depends on his movement! This is essential reading for all Americans wanting to bring back the true American Dream and turn around the USA's course to the bottom.

Showcases a Life of Achievement and Integrity

Was hoping that the Author (Bernie Sanders) could have narrated, but Joe Barrett and Brian Sutherland do a great job nonetheless.

I wish everyone would read

This book was very informative. It not only gives a biography of Bernie Sanders, it talks about the issues he has been proclaiming. For the most part, I think Bernie is not understood. Once you understand what he's all about, I think most Americans will want him as president. With him, my hope is restored that we can actually become a democracy where the people matter. If you've given up on the political process, like I did, I really hope you will read this. It's cheap. I wish I could buy a copy for everyone who can't afford one.

Lots of info! Facts and statistics! loved it!

Loved it! Lots of facts, statistics and also inside info in the white house !

I started this book looking to learn more about Bernie Sanders since I hadn't heard much about him before this year's primary election. This book covers key points in his political career without feeling too heavy handed (though I admittedly share a number of his beliefs). The performance seemed a bit much at first, but it sort of grew on me after a chapter or two and I quite enjoyed it. Definitely recommended for anyone not familiar with him other than what's been thrown around during this election cycle.

All of us are outsiders, but we do not need to be.

His book cleanly and positively demonstrates Senator Sanders' campaign ideology and political history, without overloading the reader with haughty rhetoric or empty promises. Let it be known, if you read This book, regardless of your stance on Bernie, you will walk away with a much greater understanding of what he represents, and the reason why people love him so much.

Get involved, volunteer for your primaries and caucuses, and campaign, and maybe America will have a leader like Senator Sanders.

A political ad for Bernie's ideas

I love Bernie, He is such an authentic guy, who I believe genuinely fights for what is good for the greater good. We need more politicians like him, more people like him.

Having said this, this is a very one-sided political ad. It's more a recount of how he got there and all the effort to win his senate race, which was honestly a bit boring. I wanted to learn more about his policies, and his thoughts - but they account for a fraction of the book.

Further, while his heart is in the right place, his strategy is flawed. Yes, we need to hold Wall Street accountable, Yes, we need everyone to pay taxes, especially by closing loopholes for the rich. But we can't say that all rich people and all entrepreneurs are bad, they money is unjustly achieved and they should give it all back to everyone else, including people who don't make an effort or a contribution to the community.