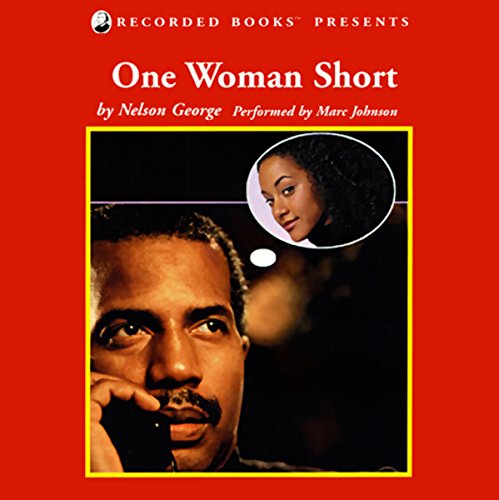 As successful Los Angeles P.R. agent Rodney Hampton watches his best friend get married, he wonders if he could ever make that commitment. But when his aging mother tells him he is "one woman short" of happiness, the handsome bachelor realizes he needs to look for a wife. Armed with a list of ex-girlfriends, Rodney sets out to discover if any of them could be The One for him.

Author Nelson George has a perfect ear for the sounds and rhythms of L.A., and he has created a modern hero who is realistic and sophisticated, yet a romantic at heart. Narrator Marc Johnson's performance adds additional depth to a man in search of his future.

Nelson George is a noted screenwriter and television producer. He has also written several award-winning nonfiction works. One Woman Short is a Black Expressions Book Club Main Selection and a national best seller.

I truly did not expect that this would be one of my favorite audio books. I really enjoyed this story from a mans perspective. The narration was a 10 and we all know that the narration often times is a make it or break it for audio selections. Well Nelson George gets this one right. Very Pleseant audio experience.

You lost me at ‘hello’ so ‘goodbye’

While I always find it interesting to hear a love story from a male perspective, the book included way too much detail and backstories on minor characters. All the unnecessary words and descriptions detracted from the storyline and caused me to lose interest.

Book itself not good

I love listening to Marc Damen Johnson, so that is why I got this book, but the story was just borrowing. Great job to Mr. Johnson