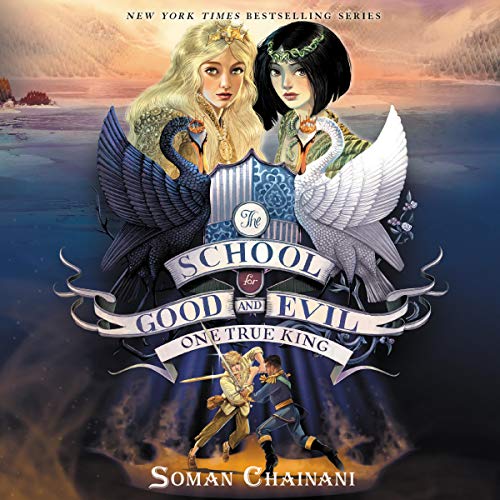 In this sixth and final installment in Soman Chainani’s New York Times best-selling epic-fantasy fairy-tale series the School for Good and Evil, Camelot’s crown - and the fate of the Endless Woods - are up for grabs.

Beyond Good and Evil. Beyond Ever Afters. The tale of Sophie and Agatha comes to a dramatic conclusion. Prepare yourself for the End of Ends.

The first test was passed.

Excalibur pulled from the stone.

But two claim the crown.

The sword returns to the stone, for only one is the true king.

Who? The future I have seen has many possibilities.... So by my will, none shall be crowned until the Tournament is complete.

The Tournament of Kings.

A race to the finish.

Excalibur will crown the winner and take the loser's head.

The first test is coming. Prepare....

Includes an exclusive preview of Beasts and Beauty, a new collection of dangerous tales from Soman Chainani.

Great for summer or anytime! A Today show pick for “25 children’s books your kids and teens won’t be able to put down this summer"!

This book was fun to listen to. Polly Lee did a fantastic job narrating. She really drew me into the story. Although, there were some parts/words in the story that I felt had been over used. The idea of unity being one of them.
I have never read such a long series in my life, besides Harry Potter, and I felt that some of the scenes in the story were drawn out too long. At some parts I wanted to turn off the audio book. A story should never be like that. It should always be intriguing. At least that’s what I believe.

Clever, but maybe too much

Sophie asks must our story always be tested. But then she answers, we follow new rules in which good does not always win. Tedras later says it doesn’t make sense, like everything else in this story.
Like why does a good children's story morph into an adult story?
Everything is a conflict of dualities: fast except when slow, clever except when stupid, kind except when selfish, dead except when alive, truthful except when a liar, trapped except when there is way out, kiss or kill, Sir Camel is a she. Of course the resolution of good and evil is trust. But heaven help me if I ever had to trust people who are as conflicted as these characters - some of whom might even be old enough to get a drivers license.
The fast paced story left me not feeling like I was ever in their world, no place and no people lingering in my mind. Except Sophie. The frantic pacing was a put off for me; such a fast pace that characters have no time to think or explain themselves to each other, except when they do.
There is a wink to a world outside of Germanic fairytales: arabesque caves, carpets, djinn, sultan and dancing girls; Princess Uma (=Japanese horse) on a camel and otaku from Harajuku; Oz; librarians (to be trusted even if Sanderson says they are evil).

Polly Lee is good but tends to monotone character voices, especially male. So many of the many, many soliloquies are delivered in similar monotone style.

The more sophisticated elements of the story make the last 3 books less of a children's or even YA novel (postmodernism in all its ramifications, wokism, messed up families, trysts and affairs and resulting births, teachers and students hooking up, death-of-lover, Death-of-Author, Reader as maker of meaning, patricide, matricide, fratricide, suicide). What bothered me was that EVERYTHING was lampshaded. Not subtle at all.

Perfect Ending to an Enchanting Series

One True King is exciting, emotional, gripping and epic. Filled with action, adventure, magic, discoveries, emotion, shock and an ending of all endings that left me in tears. I loved this series. The book was worth the wait. Brilliantly written and kept me engaged with every page. I can’t believe this is the final book of Agatha and Sophie’s tale. What a journey. My emotions were everywhere and I just want to start the series over just to relive the tale again. Be warned there are deaths and I’m still crying about the end. In the end, it has been a great adventure and I so look forward to reading it again. Polly Lee was fantastic, love her.

I just finished listening to this book! This book turned out completely unexpected. At times I was confused cause there were just so many things going on! This book is amazing! You need to read/listen to the other books before this otherwise the book will probably not make sense though.

I hope there will be a 7th book but there probably won’t be.

This is probably by favorite series!

This book has been a rollercoaster of twists and turns! I swear I hadn't expect Chaddick there actually. I also swore that I'd give this book 1 star if Sophie never gets to have her own happy ending. As expected, Soman Chainani never fails to amaze me! Kudos to Polly Lee! She really is a very good narrator, changing voices from character to character. I love her 🤟 *I especially love kiko's Ha Ha!

What a rollercoaster ride

I can't wait for the netflix adaptation of this! Though I am weary that some parts might be very cheesy when turned into a screen adaptation. But approach with care likebthe Harry Potter series, this could be great series to Come for young generations as well. I can't believe how long this series is! Each time the new one came out I expected it to be the last, only to be surprised by the twist and at the end that left me hanging yearning for more! Polly Lee did a pretty great job as a narrator giving life to each character. My only gripe is her impression of boy voices gets quite annoying after a while hahhahha. WARNING A LIL BIT OF Spoilers:


I would've liked to see Agatha's and Tedro's wedding at the end. The twist at the end was ...... bittersweet. But I guess that's the point of Soman Chainani's series. Real life or fairytale, the reality is bad things happen to Good people. We can get through the tough parts of life and Come out stronger without losing the good parts of ourselves.

I love this book so much!!!! There are so many plot twists and the writing is amazing!!! I absolutely loved the narrator and everything about this audio book!! I recommend it to everyone!!!

my daughter recommended it to me. i recommend it to anyone who loves fairytales.

I just love these books they are the perfect mix of romance and adventure😁I just love it.