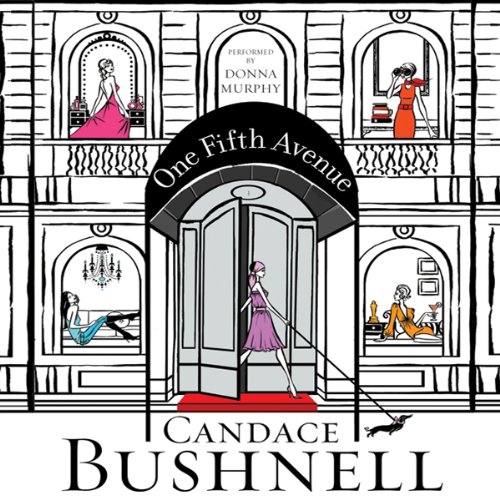 One Fifth Avenue, the Art Deco beauty towering over one of Manhattan's oldest and most historically hip neighborhoods, is a one-of-a-kind address, the sort of building you have to earn your way into - one way or another. For the women in Candace Bushnell's new novel, One Fifth Avenue, this edifice is essential to the lives they've carefully established - or hope to establish. From the hedge fund king's wife to the aging gossip columnist, to the free-spirited actress (a recent refugee from L.A.), each person's game plan for a rich life comes together under the soaring roof of this landmark building.

Acutely observed and mercilessly witty, One Fifth Avenue is a modern-day story of old and new money, that same combustible mix that Edith Wharton mastered in her novels about New York's Gilded Age and F. Scott Fitzgerald illuminated in his Jazz Age tales. Many decades later, Bushnell's New Yorkers suffer the same passions as those fictional Manhattanites from eras past: They thirst for power, for social prominence, and for marriages that are successful - at least to the public eye. But Bushnell is an original, and One Fifth Avenue is so fresh that it reads as if sexual politics, real-estate theft, and fortunes lost in a day have never happened before.

From Sex and the City through four successive novels, Bushnell has revealed a gift for tapping into the zeitgeist of any New York minute and, as one critic put it, staying uncannily "just the slightest bit ahead of the curve." And with each book, she has deepened her range, but with a light touch that makes her complex literary accomplishments look easy. Her stories progress so nimbly and ring so true that it can seem as if anyone might write them - when, in fact, no one writes novels quite like Candace Bushnell. Fortunately for us, with One Fifth Avenue, she has done it again.

Did Not Care For It

I was so disappointed! I had to start this audiobook 3 times. The characters just were NOT sticking.
No real development of any character, that is probably why I didn't like any of them.
I would not recommend this book.

This should be a movie or a t.v. series

I really enjoyed this story. While not a Sex and the City type of story, it is one of a kind that should be made into a television series. It is mindless and better that most stuff on television. The storyline is entertaining. I found the characters to be interesting and complex. The narration was outstanding. I would love to see more stories associated with One Fifth and its current, new, and aspiring tenants. I hated for the story to end.

I'll preface this with the fact that I didn't read the entire book's description before choosing this book, since I've loved everything else by Candace Bushnell. However, usually I stick it out until the end even on books I'm not in love with. Not this one. I have such a hard time with this narrator's voice and character style and can't keep up with the characters in this book, so am quitting a Audible book in the middle for the first time. I wouldn't recommend this book as a great one to listen to - perhaps it would present better on paper?

I actually can't remember anything memorable about this book. What's does that say?

Sorry, I dont usually bother giving a bad review, but this one is good if you are suffering insomnia. No endearing characters, the only character I found likeable had a very small part of the story, nothing really happened, If I were reading this book rather than listening, I would have put it down with a yawn and probably forgotten about it.

i just loved this novel, truly a classic if you love New York, its buildings and the people who live in them. i definitely can see myself re-listening to this book many times in the coming years.

I recommend this book

This was a well written and well thought out story. I enjoyed all of the characters and hate to say goodbye to them. I listened to this as an audible book, but then bought a hardcopy I saw at a secondhand shop. This book has a place on my bookshelf.

Would you try another book from Candace Bushnell and/or Donna Murphy?

What was most disappointing about Candace Bushnell’s story?

having read several of candace bushnell's book, this one was definitely by far the worst.

she was doing a good job

probably not....u can't compare it to

This one was very good but not 5 stars. It was very entertaining and you will not be bored listening to it.