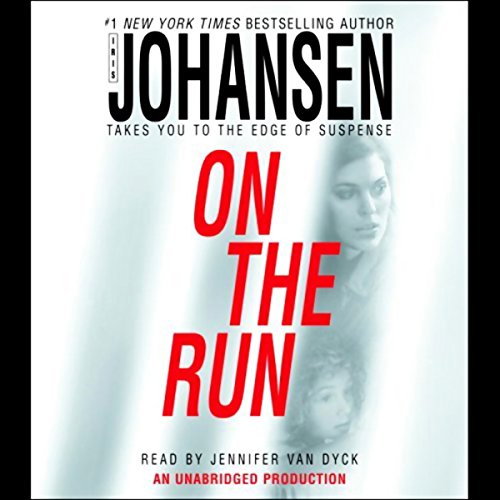 "The novel starts off with guns blazing and doesn't slow down for murder, kidnapping, blackmail, sex, or sandstorm." (Publishers Weekly)
"Johansen gives her readers what they have come to expect from the queen of suspense: a truly evil, skin-crawling villain and complex heroes who must tangle with him in the shadow world of foreign intrigue." (Booklist)

The picture was a warning: they'd found her. For eight years Grace Archer hoped this day wouldn't come, and knew in her heart that it would.

She'd taken her daughter, Frankie, to a rural Alabama horse farm that might just as well have been at the end of the earth. But the man out to kill them would gladly follow them that far. And now, it seems, he had.

A woman with a highly classified past, Grace had never run from anything in her life. But as a mother, she'd do anything to keep eight-year-old Frankie safe. Now that safe world has been shattered, and a ferocious hunter has been unleashed. Suddenly the agency that owed Grace its gratitude and protection has abandoned her and only one ally remains: a man even more dangerous than her worst enemy.

She hasn't set eyes on Jake Kilmer since the catastrophic events of eight years ago. Now he's asking Grace to trust him with the one thing more precious to her than life itself. But with a ruthless criminal kingpin determined to make her pay for the past, her and her daughter's lives on the line, and time running out, she just may have to put her faith in a man who she believes has already betrayed her once.

This book was very disappointing, The summary made this sound like it was going to have a lot of action where in fact in had very little.

The Story Revolved around an UnderSexed woman a Child Prodigy (don't you hate storys that have to use brilliant kids to create a plot) and lots of talk about horses.

The Plot was preposterous and unbelievable. Don't waste your time on this one

This was a long and very boring book. I have read other books by this author and enjoyed them very much, it was extremely difficult to even finishe this one. It was one of those reads that you fast forward through 1/2 of the book just to get on with it.

I decided to download this book to help me through the monotony of a long overdue outdoor painting project. As it happened watching the paint dry was actually more interesting.

To say that the story-line was a little far fetched would be an understatement. Let's just say the entire plot hinges on 2 white horses and an ex-cia horsewhispering woman who must tame the killer ponies, under duress, for a bad guy who wants the horses to lead him to some "treasure" buried somewhere in the desert.

It's very poorly written and narrated and I would not recommend this book.

I was very disappointed with this book. I've read (not listened to) other books by her & liked them. This one made it obvious that she has reverted back to her Harlequin days. She spent too much time exploring their "should I do him/her, or not" feelings instead of developing the plot, the characters personalities, & some ACTION!!!

Why-oh-why did I not read these reviews before downloading this book. The plot is just too far fetched to be credible... I couldn't even suspend my disbelief and "just go with it" it's THAT far out there, so much so it deletes any suspence it was trying to obtain. The more I listened, the more I regreted my purchase - the book was just simply in one word: ridiculous.

Not as good as we hoped

This book was not the best one we have listened to. The author repeated the same lines over and over.
I would not recommend this one

One of the advantages of audible is that you get to try out new writers. This one is not a good candidate. The caracters are flat sterotypes without any credibility or inner life. The main child character is a flawless prodigy with an angelic spirit and maturtity which after a while becomes unintentionally funny. The plot is rather far out and involves two horses with special talents, a woman who can connect spiritually to them, a genuine male hero and a vilain with a heavy french accent. I enjoy good suspense books - King, Grisham et.al. - but this one is not worth the time it takes to suffer through it.

If you're looking for action, look elsewhere

I was intrigued by the story line and the online summary convinced me to download and listen to it. Overall, I was disappointed. Not to be sexist, but it was obvious that the book was written by a woman. To clarify, the author spends too much time developing the sexual tension between the two main characters (Grace and Kilmer) and Grace’s ‘motherly instinct’ is prevalent throughout. This is not necessarily a bad thing – if you want to read a book that is more about the characters and how they “feel” more than an action book. I wanted the latter so I was left flat and wanting more action. The story was too much about Kilmer and Grace than developing an action-packed story.

The other thing that was somewhat unrealistic was the dialogue with Grace’s daughter (Frankie). I have three children (who are well above average intellect) and I do not find myself conversing with them in the almost silly, frank manner of the book. Nor do they discuss things in the manner in which Frankie does in the story. The whole interaction between Grace and Frankie got too monotonous and superficial (for me).

The last point I will make is that you are almost two-thirds through the book before you discover the significance of “the pair” (you will have to find this out for yourself – I won’t spoil it for you). So, you think finally the story will pick up, and it does, but still not enough. The ending seems a bit anti-climatic and is wrapped up too abruptly. I kept waiting for a surprise thinking that surely it’s not over just like that. But it was – except for the story of how are things resolved for Kilmer, Grace and Frankie. That part of the story continued to drag on for almost another half hour.

Not a bad story overall, but it was just not what I was looking for.

On the Run leaves you breathless ...

I have all Iris Johansen's books, and this one is one of my favorites and I was happy to find it in the audio unabridged form. I now have many of her books in audio unabridged form (I detest the abridged form of audio and refuse to purchase any abridged books, I will not even listen to them for free!). I was so excited to see Wait until Midnight was out in audio (another of my favorite books) and then just as I was going to purchase it I saw that it was abridged....darn it anyhow....so disappointing....of course I did not buy it.