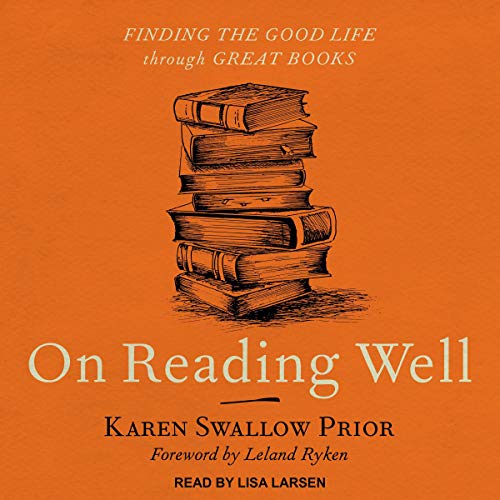 Reading great literature well has the power to cultivate virtue. Great literature increases knowledge of and desire for the good life by showing readers what virtue looks like and where vice leads. It is not just what one reads but how one reads that cultivates virtue. Reading good literature well requires one to practice numerous virtues, such as patience, diligence, and prudence. And learning to judge wisely a character in a book, in turn, forms the reader's own character.

Acclaimed author Karen Swallow Prior takes fans on a guided tour through works of great literature both ancient and modern, exploring 12 virtues that philosophers and theologians throughout history have identified as most essential for good character and the good life. In reintroducing ancient virtues that are as relevant and essential today as ever, Prior draws on the best classical and Christian thinkers, including Aristotle, Aquinas, and Augustine. Covering authors from Henry Fielding to Cormac McCarthy, Jane Austen to George Saunders, and Flannery O'Connor to F. Scott Fitzgerald, Prior explores some of the most compelling universal themes found in classic books, helping readers learn to love life, literature, and God through their encounters with great writing. In examining works by these authors and more, Prior shows why virtues such as prudence, temperance, humility, and patience are still necessary for human flourishing and civil society.

Karen Swallow Prior weaves together classic literature and principles of living a good life in a manner that truly draws you in! The reader is both entertained and compelled to do some soul searching. A great read!

A jewellery tour-book through great literature

This book! I don’t even know where to begin describing what this jewellery of a book has done for me. This book has been a most cherished companion in the last couple of months - it has guided me through 12 amazing works of literature of which I have undertaken to read 9 before each of their respective chapters. I was awe-stricken and stirred in my thoughts so much of the time (and the effect has not worn off yet, I’m still haunted by “The Tale of Two Cities”, by “Faith”, by Ivan’s dead life, by O’Connor’s short stories). I feel a whole world has opened up, it has given me a great appetite to keep reading classics (I have already read 3 more works along the way by some of the authors that appear in the selection, I have fell in love with some, like O’Connor, of whom I knew nothing of before). Besides introducing me to these great works that are really diverse from one another not just in worlds but also in styles and narrative techniques (this guide also gives some precious hints as to how to read and judge each work to make the most of it), I was also very appreciative of the condensed, full of substance and revelatory manner of expanding each virtue, fitting in exquisite insight from great philosophers and Christian thinkers (I now have a fresh motivation to read Thomas Aquinas, and also a curiosity for some other works that were mentioned along the way, like The Canterbury Tales, The Divine Comedy, The City of God and others). “Reading literature, more than informing us, forms us.” says K. S. Prior in her introduction. I do feel reading all these works has been formative. Notable ideas and quotes about each virtue abound, I’ll try to select 1-2 ideas that have striked me for each of the 12 virtues analysed in this book: 1. Prudence In classical art, the goddess Prudentia is often depicted with a mirror (to represent self-knowledge or conscience) and a serpent (an ancient symbol of wisdom). The image conveys the understanding that prudence requires knowledge of both universal principles and the particulars of a given situation, along with the idea that, as Aquinas says, a prudent person is one who sees from afar. 2. Temperance "Temperance helps us to desire pleasures in a reasonable manner, desiring them neither too much nor too little, the virtuous mean between the vices of self-indulgence and insensibility." 3. Justice "In a perfect world, what is just is also fair. In a fallen world, however, justice does not always feel fair. in our fallen humidity we often bristle at the holiness of a God who's justice does not always strike us as fair.” 4. Courage Courage (fortitude = the habit of facing difficulties well) and its link with the heart (root word): getting your heart in the right place at the right time despite the obstacles; putting the greater good before the lesser good in spite of opposition. 5. Faith: New Testament scholars describe faith as having three primary elements: belief (cognitive), trust (relational), and fidelity (obedience). … "Thus, rather than having faith in faith itself, as a point of certainty that relies on our volition only, true faith is a childlike trust in God, who allows his children to question him as they might question their earthly parent, and to do so in the certainty of the relational knowledge and trust of the Father.” "What does it mean to practice faith well? While our works cannot save us, our habits can strengthen our faith." 6. Hope: "Hope gives birth to love and activity." T. Aquinas 7. Love: goal: communion (from The Death of Ivan Ilyich: not self-interest, self-advancement, no drawing of lines after which you’ll not extend yourself because of comfort and self-protection) 8. Diligence: Diligence (root: single out, prize, love, esteem, value) is carefulness, attentiveness (vs negligence), steady persistent effort. Opposite: Sloth = carelessness, apathy (no appetite/desire), oppressive sorrow that weights so upon a man’s mind that he wants to do nothing; sluggishness of the mind which neglects to initiate the good, robs us of our appetite/zest/interest/enjoyment of God, stops us from seeking Him and His righteousness. "Paradoxically, people of business and frenetic activity can be the most slothful." Diligence: taking one step at a time towards the goal + not getting distracted + not giving up 9. Patience: Patience is willingness to endure suffering. When faced with suffering/wrong, the virtuous person responds neither with wrath (overcome wrong by doing wrong, unwillingness to accept this reality) nor stoicism/carelessness/sloth/disspiritness (withdrawal from this reality), but with patience, which is not lack of care/inaction/passivity, but virtuous anger, perseverance, anchored both in present reality and future hope. "Patience is a complex of other virtues: generosity, self-control and humility (they take us out of our natural egocentrism); patience is the place where faith, hope and love meet up" (NTW) 10. Kindness   Envy (sorrow for another’s good) vs Kindness (when something good happens to another, to rejoice as it happened to you, not to envy it) 11. Humility: (root: earth, ground) Being truly humble is being grounded. EXPERIENCE is rooted in the self and therefore is a source of knowledge that is ripe for pride (pride: placing faith in oneself) and is therefore a way of knowing that sharply contrasts with REVELATION (Seeing who we really are--which requires seeing ourselves in relationship to God--is true humility; self-knowledge perfected; man’s estimation of himself according to the truth) "None has raised high enough to look down on others."

Prior enfleshes the spirit of C. S. Lewis in her perusal of the character novels of the past. She points to how virtue must be demonstrated by believable characters in great works of fiction.

Reading as a means of learning virtue

I both love the actual book On Reading Well and I love the intent of the book. On Reading Well is trying to teach the reader how to read books with an eye on classic virtue. Swallow Prior is an English professor, focusing on 17-18th Century British literature. Karen Swallow Prior is trying to restore the historic ideal of seeing literature as a means to understanding virtue. She is part of the movement toward great books. And there have been a number of books that have started to write on traditional virtues lately. What makes me uncomfortable is that some are returning to Great Books, not because they part of a great tradition of reading as a means of learning about and practicing virtue but as a means of restoring the great Western tradition, with the emphasis on Western culture. Prior’s academic focus is 17-18th century British literature. So it makes sense that this and her earlier book, Booked, primarily focus on traditional western canon texts. However, in reviewing her earlier book and this one, I wish she had made more of an effort to find virtuous texts outside of the Western canon. Not because western canon texts are always bad, but to emphasize that literary theory that was deconstructing the White, male, patriarchy that abuses Christian thought by upholding slavery or colonialism or sexism or other oppression should be still critiqued even while holding onto the idea that reading can be part of that critique. We are in a rough patch intellectually. Many of the critiques of western thought and action are right. But also many of the criticisms are fundamentally deconstructive and not constructive. Returning to virtue and character and the telos of what it means to be human is good. Returning to those ideas as a means to fighting deconstructionism or liberalism or pluralism misses the point and can quickly degenerate into white supremacy or at the very least western cultural bias. Again, I do not think this book in particular is attempting to uphold white supremacy. I do think that in particular Evangelical Christian authors need to work harder at making sure that they are doing the work to diversify their work. In this case that means more should have been done to include positive examples of non-White authors, especially Black authors, doing work in virtue. There was one chapter about Endo’s Silence. And it was good. But similar to my critique of Dreher’s Benedict Option, it matters if all of the minority quotes are outside of the US. I really do commend On Reading Well as a good exploration of both the concepts of virtue and how to read in a way that promotes virtue. But I also think that it is an example of where White Evangelicals need to do more to make their work more Evangelical and less White.

This is one of the most enlightening and thought provoking books I have read in a long time. I want to go back and re-read some of the books she highlights.