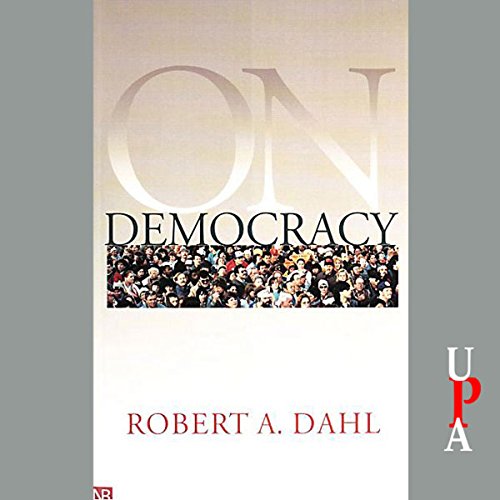 "Robert Dahl has written a fine little book on his favorite subject, aimed as much at the general reader as at the student of politics.... On Democracy is a great success." ( The Economist)
"As one of the most impressive scholars of our time, and as the authority in the discipline, it is of great importance that Dahl offers this tract on democracy. In a style many will find accessible, Dahl focuses on the questions he has considered over his long and distinguished career... Anyone who is a Democrat must read this book. Not only does it provide the analytical leverage for understanding the process of democratization ongoing in numerous countries, but it also turns an introspective and critical eye on the old democracies of Europe and North America." ( Virginia Quarterly Review)

The last half of the 20th century was an era of democratic triumph. The main antidemocratic regimes - communist, fascist, Nazi - disappeared, and new democracies emerged vigorously or tenatively throughout the world. In this accessible and authoratative book, one of the most prominent political theorists of our time provides a primer on democracy that clarifies what it is, why it is valuable, how it works, and what challenges it confronts in the future.

Robert Dahl begins with an overview of the early history of democracy. He goes on to discuss differences among democracies, criteria for a democratic process, basic institutions necessary for advancing the goals of democracy, and the social and economic conditions that favor the development and maintenance of these institutions. Along the way, he illustrates his points by describing different democratic countries, explaining, for example, why India, which seems to lack most of the conditions for a stable democracy, is nevertheless able to sustain one.

Dahl answers such puzzling questions as why market-capitalism can both favor and harm democracy. And he concludes by examining the major problems that democratic countries will face in the 21st century, problems that will arise from complexities in the economic order, from internationalization, from cultural diversity, and from the difficulty of achieving an adequate level of citizen competence.

This book is published by Yale University Press.