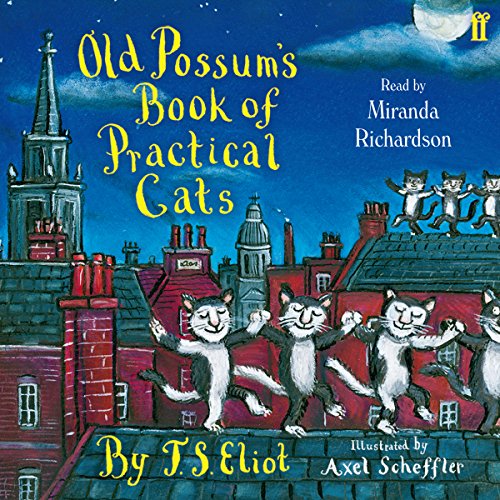 Meet magical Mr. Mistoffelees, sleepy Old Deuteronomy and curious Rum Tum Tugger. But you'll be lucky to meet Macavity because Macavity's not there!

In 1925, T. S. Eliot became codirector of Faber & Faber, who remain his publishers to this day. Throughout the 1930s he composed the now famous poems about Macavity, Old Deuteronomy, Mr. Mistoffelees and many other cats, under the name of 'Old Possum'.

In 1981, Eliot's poems were set to music by Andrew Lloyd Webber as Cats, which went on to become the longest-running Broadway musical in history.

A beloved book, a beautiful reading. I just sat down to listen with my eyes closed and, from time to time, an Edward Gorey drawing would come to mind.
Cat lovers everywhere should give it a listen.

I have not one negative thing to say about this piece TS Eliot did a great job writing it. Miranda Richardson was perfect to read it and the story is unique, universal, and heartwarming. On top of all that it gives children of this age something to strive for in the realm of vocabulary. A treasure for all time.

While the movie may have fallen short of expectations, Miranda Richardson's reading of T.S. Eliot's classic really delivers! I smiled throughout the reading and felt like a kid again. I loved it

Great to Listen to!

I love T.S. Eliot and this is one of his most underrated poetry books. The narration was on point and grasped the spirit of each cat fully.

The narration was perfect for the piece. What a great way to spend some time; especially if you are a cat lover.

"And there isn't any need for me to spout it: For he will do As he do do And there's no doing anything about it!"

The book itself is good but it doesn’t have all of the poems in it of the practical cats as in Macavity Me.Mistofolees

Every car trip or traffic jam is spent listening to this audio book. I never tire of it.

The reading was fine, but did not exactly match my text is a few lines. I wanted to see if I could h ave a professional read the poems while I followed along in kindle text. It worked for a while and then it just quit, and I could only read my kindle text OR listen to audio. I generally prefer to read rather than listen because I read much faster than audio. This was an experiment because this is poetry.**

I must have listened to this half a dozen times and each time I still chuckle at the humour and characterization. Love it and sent a hard copy to my granddaughter.