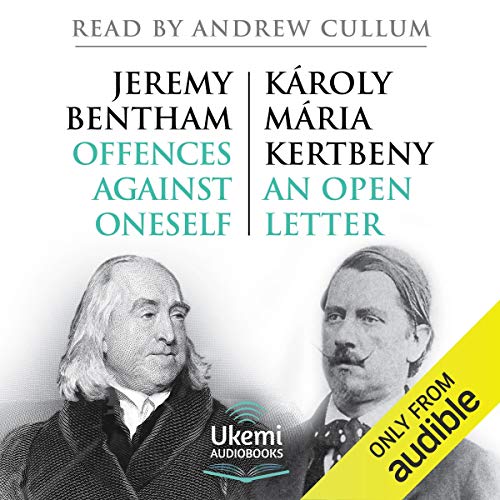 The criminalisation of homosexuality over centuries has been one of the shocking injustices of European history - it existed from the middle ages and before and well into the 20th century. The death penalty (hanging or burning) was a commonplace feature in legal systems. These two remarkable texts - one from England in the 18th century and one from Germany in the 19th century - show how there was a growing awareness of the prejudice and the cruelty of its effect.

Jeremy Bentham (1748-1832), the prominent English writer, philosopher and jurist, wrote Offences Against Oneself in 1785. In characteristically measured and clear tones, he argued against the death penalty for sodomy and queried what was actually wrong with homosexuality in terms of the individual and society. Sadly, the public opposition, rooted in religion and public morals, cautioned him against publication, and it remained among his private papers at his death, not to emerge for decades afterwards.

Karóly Mária Kertbeny (1824-1882) was an Austro-Hungarian journalist and writer who lived in Berlin. The suicide of a friend of his, crushed by his preference for men, prompted Kertbeny to campaign on behalf of anti-homosexual legislation in Europe. It was Kertbeny who first coined the words ‘homosexual’ and ‘heterosexual’, which were later adopted by Kraft-Ebbing and others. In 1869 he published (anonymously) a pamphlet, An Open Letter addressed to the Royal Prussian Minister of Justice arguing that the Prussian sodomy law violated ‘the rights of man’ and should not be part of the proposed Penal Code for the North German Confederation. His closely written text demonstrates, very clearly, the hypocrisy and harm caused by the criminalisation of homosexuality for both men and women. He was ignored. The anti-homosexual legislation was adopted and, in 1871, incorporated into the legal system of the new Germany.

Both these documents are fascinating listening, illustrating the prevailing prejudice of society in the face of known, widespread activity and how the prejudice continued, despite the efforts of individuals who could see and demonstrate the illogicality and the hysteria surrounding the subject.

It is interesting to note that, in Europe, punishment for homosexual activity was first abolished in France in 1791 after the Revolution, but legal restraints continued to exist in England until 1967 and in Germany in 1968 (East) and 1969 (West).

Offences Against Oneself and An Open Letterに寄せられたリスナーの声