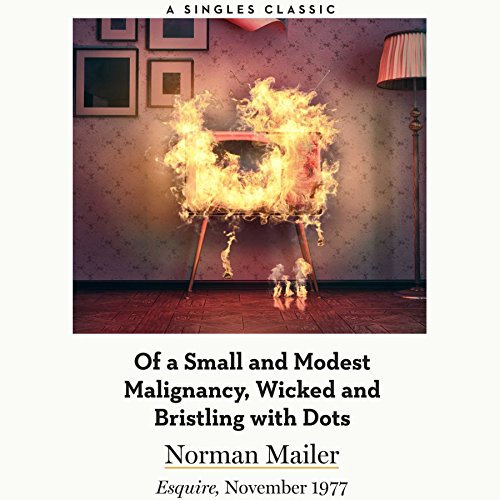 "A small treasure of a book...It deserves a wide audience of Mailer and Vidal fans" - Dick Cavett.

He prepared therefore for the meditative journey that proves most excruciating in Limbo, a rounding through the past, a trip back! It is a venture full of perils. To meditate on TV might prove equal to writing a recollection of an enemy one has never met and cannot quite believe in. Indeed, how to conceive of an enemy who is without personal animosity? It was like writing a memoir of an oxymoron. Limbo set its tasks.

More a short book than an essay, Of a Small and Modest Malignancy, Wicked and Bristling with Dots is Norman Mailer's scathing and often brilliant take-down of television culture, penned for Esquire in the wake of Mailer's infamous altercation with Gore Vidal on The Dick Cavett Show.

Of a Small and Modest Malignancy, Wicked and Bristling with Dots was originally published in Esquire, November 1977. Cover design by Adil Dara.

Of a Small and Modest Malignancy, Wicked and Bristling with Dotsに寄せられたリスナーの声