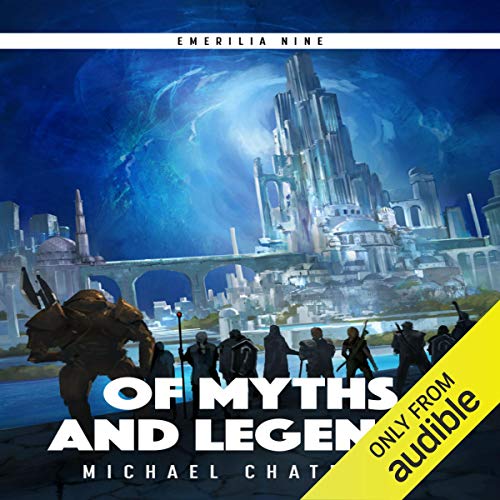 Of Myths and Legends

The emperor has spoken, and the portals are opening. The Event is larger than anyone anticipated with Emerilia’s people needing to band together to survive.

The creatures of nightmares and children’s stories might roam Emerilia, but this isn’t their land - it isn’t their home. The Terra Alliance will use everything at their disposal to gain strength and push back the forces that roam Emerilia.

The Pantheon moves in the shadows, the forests, and across Markolm. Light, Earth, and dark’s forces only grow as they recruit those from The Event into their ranks.

Beset on all sides, Party Zero prepare for a war not seen since the ancient times of Emerilia. They know that this is only the beginning.

This book is action packed, but not in a good way. I was excited and had high expectations for the battles that have built up for so long. There is indeed a lot of tough battles with a good variety, but the performance and writing is bad.

The fights are dragged on and the way they are described is annoying. Words are overused, such as demon lord and War god/goddess. The narrator's voice becomes monotone and my mind just drifts over the words either not quite understanding what is trying to be described or losing interest as blows are exchanged with no real outcome.

The descriptions are either over the top or repetitive. No middle ground.

This series fell off for me after the battle at Selhi. I have been continuing being slightly satisfied here and there, continuing out of etiquette and some minor spite. But this is where I get off. I dont think I will bother finishing this book either.

If you have enjoyed all the books thus far and dont have problems, then you will enjoy this book too. But if you have been finding issues, they only get much worse.

Too many repeated words, too much battle

I’ve loved the other books, but the repetition is getting out of hand.
The character sheet has no meaning and the stats do not have any real impact, as they are just arbitrary numbers, so why waste time on them?
The battles are looking like dragon ball fillers as well, not being really interesting.
And the lack of attention to the main characters makes this whole book very disinteresting.
And the word repetition is really getting bad. Please use a thesaurus...
Overall not worth it.

I used to enjoy this series when the characters defeated opponents and created solutions within RPG relates possibilities.
But now it is more like listening to silicon valley programmers code impossible cheat weapons and God mode settings.
This series plot solutions and MC is too unbelievable for either a sci-fi or fantasy plotline.
Dave has no fear, no issues, no problem just creating cheat and God mode codes and weapons. The author seems to have forgot how to no show how broken Dave's powers and abilities are. Like Dave already created the ultimate weapon/solution, but has to hide it from everyone for two more books. But Dave knows he has it and can not hide that knowledge and smugness.

good story so far. I can see different threads coming to a head and the next book should be exciting

loved this book, amazing story great read definitely waiting for the next book to start

i just kind of waited until it was over. its the same thing over and over again. the story and narrator started to be monotone. I root for the characters but the coding crap is too much. the story needs to move faster. and the quest updates are brutal.

Getting a little tiring.

Love this series, love the plot and will continue to listen. My issue lies with the over descriptive battles. It felt like a huge chunk of this book was just battles. I understand it is important to the plot, but it just seemed to drag on and on. Felt more like filler than substance.

Just trying to finish these at this point.

interesting concepts on weapons and armor, but man this is getting drawn out. hurry up and finish already.

I love this series I can't state that fact enough. Great progression, character development, the plot moves forward at a great pace, and theirs a bit of tragedy that no one was suspecting that made this story and series all the more real.

if you have gotten this far into this series, then you will want to snap this one up too, if you haven't - start it from the beginning - it's a good one!

good as is, edited would be better

I really like most of the series, getting annoying though when stat and attribute point continuity errors creep in that said the story side apart from the numbers issues is still just as good as ever,

I was loving the series but then this book too much demon lords and why kill of 3 characters. I'm going to to finish the series but I doubt I'll do a relisten in a while.

Of Myths and Legends