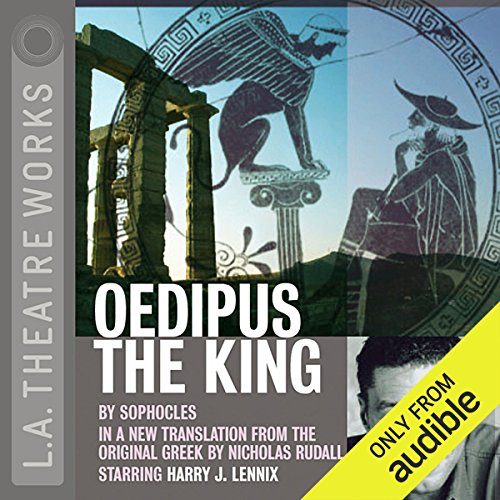 In Sophocles' tragedy, Oedipus discovers that he has been caught in his terrible destiny, unknowingly murdering his father and marrying his mother.

This perfomance features a new translation from the original Greek by director Nicholas Rudall.

Extremely atmospheric. The translation is unobstrusive, natural and unforced but still "classic". Close your eyes- you will feel like you are in Athens on a summer night 2500 years ago.

Sophocles is one of the greatest play writes to have ever lived. Oedipus tackles one several important themes in greek literature including: free will, justice, family, friendship. Exceptional translation and pertinence of this wonderful greek play.

A Wonderful Performance And Translation

I downloaded this because I needed to listen to Oedipus Rex for a poetry and drama class, and I'm glad I went with this version. When anyone does a version of any of the Greek Tragedies they have to translate from the original Ancient Greek, and thus your milage will vary depending on a number of factors. The director of this performance, as he explained in the interview following the play, which was a very nice touch, states that he chose too make the language modern, but of a more proper sort that still retain the tone of the original Greek.

It's kind of like dubbing anime; you stay as close to the original as possible while making changes when necessary, not to take away from the original, but to make it more relatable to the audience and easier to understand.

an absolutely great performance of a true Greek tragedy. Well over a millennium since this was written and the complexity and richness of the tale still resonates today...are we truly in control of our destiny or are we victims of fate? This is a question that we may never fully know.

The play is an absolute masterpiece about the human experience. Perennial, short, compact and riveting. The cast is excellent and "invisible": the listener will focus on the story rather than idiosyncrasies of actors. The translation is great, as poetic as any work from that era but modern enough to sound natural.

I was just inspired by everyone's performance, and the story, brought down from the long words.

I needed to quickly re-read this to help out a college student who works for me (I often use this as an excuse to re-read great works! lol) and this version is wonderful. Great voices and performances, easy to understand - as the work is a play - listening really brings it to life in a way that reading just cannot. BUT - the absolute best part of this production is the incredibly in depth discussion at the end - the discussion covered every question my worker had asked me to clarify and so much more.
I, myself, love a good brit accent - in truth....makes my knees go weak, but I know many Americans can't decipher them - so this is done by American actors - very good ones, so if that is a concern for you - you will enjoy this production.

still to this day... an extremely intriguing story of irony... and well performed. love the second chapter review and interview